Spring training 2014: The Perils of Evaluation: the Brett Wallace story

Maybe being inside baseball would be fun. But, RedHawks First Baseman proves just how awful that experience may be.

Share All sharing options for: Spring training 2014: The Perils of Evaluation: the Brett Wallace story

Listening to real, live baseball games this weekend was a revelation. It's so nice to have a wonderful game back in all our lives.

One of the best reasons is that it sparks new thoughts about the Astros. As you sit there through a spring game where the results don't matter, the mind tends to drift to other matters. For instance, how in the world will the Astros evaluate Brett Wallace this spring?

Stay with me. We know that being inside baseball must be pretty awesome. I can only imagine the stories Mike Fast and Kevin Goldstein (and Colin Wyers and Bill Firkus and Amanday Rykoff and everyone else who the Astros drew in from outside baseball) can tell about how great it is to work for a baseball team. I'm sure it has all the normal annoyances of any job, but it beats the heck out of quite a few jobs.

After Jerome Williams was signed, Houston took Wallace off its 40-man roster. The first baseman is in camp with Houston on a minor league deal.

Even back then, we were bouncing back and forth on whether Wallace would make it. Evaluation is pretty hard, you guys.

Yet, one of the hardest parts might be evaluating a guy like Wallace. It's easy for us to take pot shots at a guy like Wallace. We laugh and call him RedHawks Shortstop. We make him the butt of jokes on the podcast and in throwaway tweets. But, what if our job relied on evaluating him correctly? On judging whether he could contribute to this team or if he'd hit .221/.284/.431 again with 13 home runs and a 36 percent strikeout rate?

Spring stats are meaningless. it's a joke in the baseball world at this time of year that everyone is in the BSOHL (Best Shape Of His Life), that everyone is retooling his swing or learning a new pitch or something. Most of it comes to nothing. Remember when hitting coach John Mallee called Wallace a "monster" last spring? He was less than monstrous last season.

The same thing happens with spring statistics. We know they don't "mean" anything, even if they do. It matters how a guy does against major league competition, but if he gets most of his hits against guys who will be in Double-A in two months, does that tell us anything? What about the pitcher who throws nothing but curves in a game? If Wallace blasts two home runs off that guy, does it tell us anything at all?

We know spring stats don't mean anything. Coaches have to evaluate based on last season and use the spring to round out the edges. Yet, with Wallace, that becomes more complicated.

For instance, the Astros obviously have a solid evaluation on Wallace. He got drafted by Jeff Luhnow when the new Astros GM was in the Cardinals organization. He's had a lot of time to think about Wallace, to know his profile. Add in the four seasons of big league time Houston now has to judge Wallace on over 1,077 plate appearances and the picture should be clear.

It's not completely solid, though. There is still doubt. Wallace is still young and hasn't hit that magic 1,500 PA plateau where we feel much better about his major league career. Because of that, we can view his season in different ways. If you're pessimistic, you can point to his awful April as proof that he's not fit to cut it in the majors. If you're optimistic, you can point to his July and August performances as proof of what he could do given time.

If he tweaks his swing and hits well in spring training, is that proof he's turned a corner, or just noise? How can you ever be sure you've removed any bias you might feel for him because you've been around him for years? How do you judge him fairly alongside a guy like Jesus Guzman, who just joined the team this winter? 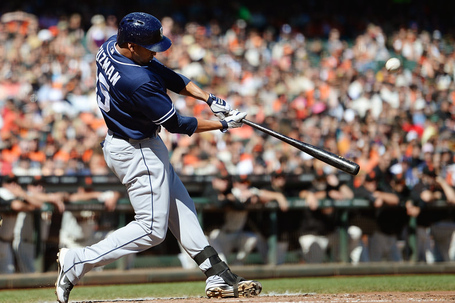 I have every confidence the Astros CAN do this fairly and make a good decision. What I'm saying is that it must be a very difficult task.

Even after going through all this, even if they feel solid in their evaluation in every way, there's still a chance Wallace goes somewhere else and hits finally. That he fulfills his destiny as Lyle Overbay, part 2. That must sting the most.

Not to sound repetitive, but in the excellent Dollar Sign on the Muscle, the author talks about "negative scouting." His point is that it's very easy to point out the myriad flaws in a baseball player and be right 93 percent of the time. It's much harder to project out a guy positively as a major leaguer. With Wallace, I imagine it's even harder to avoid negative scouting. We know his flaws more than anyone, because we've seen them for four years.

At this point, we still don't know what the Astros have in Wallace. He's got one hit in seven at-bats this spring with an RBI and three strikeouts. That tells us nothing, even as it fits in with everything we know about him. But, we're biased.

The Astros have to try and be objective about him. That seems like a nearly impossible task and one I don't envy them in the least. Working in baseball must be so much fun, but it also must break your heart.