The Astros open 2014 play at Minute Maid Park with a team south of the border, Rojos del Águila de Veracruz.

This weekend the Astros will the Rangers in San Antonio and Rojos del Águila de Veracruz of the Mexican League. The Astros announced the original plans for this match up last September. This comes after the 2013 exhibition season that saw the Rangers play the Diablos Rojos del México. The Astros also signed two players from Diablos Rojos del México, Japhet Amador and Leo Heras. It was reasonable for the Astros continue this connection the Mexican League.

Let's give a little background about the league itself, the Mexican League is considers to be on level with triple-A baseball. Amador has spent much of his time with the Astros in triple-A and Heras was for the majority of the time in double-A Corpus Christi.

For reference, here is Veracruz on a map. 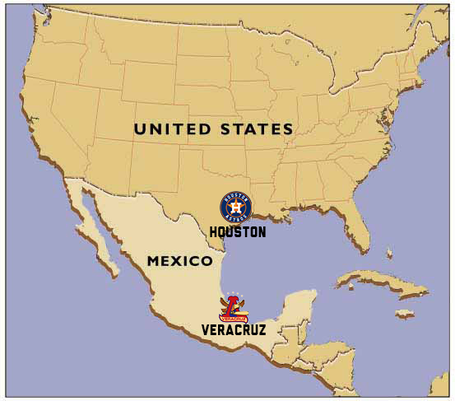 The Astros play in San Antonio on Friday and the majority of the major leaguers will travel to Houston Saturday for the game against Rojos del Águila. We will keep you updated as we get more info on who will playing in the games.