Have the Astros improved the roster over last season?

Now that the 25-man roster is set, the lineup is set and the rotation is set, it's time to do some comparisons. Think of this as list-making, but in paragraph form. Did the Astros actually improve their Opening Day roster from a year ago? Is this a better team than it was last season? Seems as good a thing to talk about today as anything, right?

Let's break them down in a Tale of the Tape:

Bud Norris vs. Scott Feldman - Norris started Opening Day and was worth about 1.5 wins for Houston until he was traded in July. Feldman is projected to be worth between 1.1 and 1.5 wins above replacement for Houston this season. Advantage Norris.

2013 Lucas Harrell vs. 2014 Lucas Harrell -Last season, we didn't know Lucas Harrell would turn into a head case who lost any ability to pitch. This year, we know all that. Last year, we were dreaming about a Norris-like return for Harrell in a trade. This year, we're hoping he can be replacement level. I'm calling this a wash, since both versions bum me out.

Philip Humber vs. Jarred Cosart - Easy. Even with Cosart's troubling peripherals and his personality issues on Twitter, he's still got plenty of upside. Last year, Humber didn't have much of that. Advantage 2014.

Brad Peacock vs. Brett Oberholtzer - This one is tougher. One guy had a ton of prospect upside and the other guy is the last gasp from the Michael Bourn trade. One guy has a checkered professional record and the other guy has actually been solid in his major league starting time. Both may be destined for future bullpen roles, but Obiehockey's lack of struggle as a starter give him a slight edge. Advantage 2014.

That means we've got a wash. This rotation is no better or worse than last year. Maybe that changes once Asher Wojciechowski replaces Harrell and Mike Foltynewicz replaces Keuchel, but for now, there's no significant edge to either rotation. 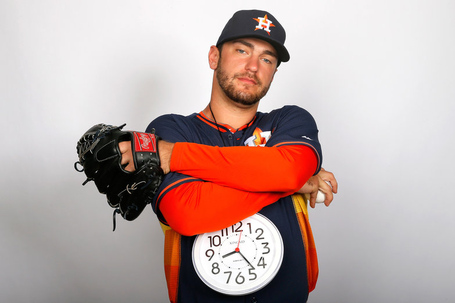 If the Astros had only fixed the bullpen this winter, that would have been enough. Sure, the signings of Matt Albers, Chad Qualls and Jesse Crain may not work out, but the sheer numbers of bullpen guys Houston added should mean a drastic improvement over the dumpster fire that was the 2013 bullpen.

Last season, Houston had Jose Veras in a closer's role he was unproven for and a bunch of young guys who may or may not work out. They did not work out.

This year, the 'pen is filled with veterans who are a little easier to project to be decent. That's all Houston is asking for, after all. We shouldn't expect this bullpen to be the best in baseball, but getting to decent would mean a quantum leap over 2013.

As we covered the other day, this year's lineup figures to be much improved in getting on base. That leads to more runs and means this lineup should be much better than in 2013, even if it doesn't "seem" better.

Dexter Fowler not only might lead the team in WAR, he should lead the team in plate appearances if he bats leadoff. Given that he should also post the team's highest on-base percentage, that means he will be much more than a pure table-setter at the top of the lineup.

To make the move into a top 10 offense, though (at least in terms of OBP), Houston will need a few breakout performances. If Bob Grossman can improve on his bumpy rookie campaign and if Jose Altuve returns to pre-2013 form, the Astros will be much, much improved.

Thinking in terms of percentages, there's a good chance Houston makes a leap offensively even if everyone just hits their projections. If they improve, it should be much better. If they collectively fall short, this lineup still should be better, because it's really hard to be as pitiful as the Astros were in 2013. That team gave significant at-bats to Carlos Pena and Rick Ankiel. L.J. Hoes looks much better than those two guys, right? 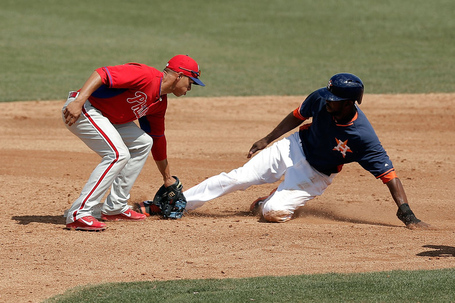 This doesn't matter a ton, but the benches are so similar. You've still got Carlos Corporan. You've still got Marwin Gonzalez. Brett Wallace was around last season, but so was Brandon Barnes. This year, you've got Marc Krauss and that's about it.

If the lineup is better and the bullpen is better, the 2014 roster must have the edge, even if the rotation craters and is worse than last season. I don't believe that will happen, but there's a good chance it does with all the youth in the 2014 rotation.

So, give 2014 the small victory for being a better roster than 2013. The improvement is't enough to move the needle much on Houston's expected wins, nor is it enough to keep pace with the improvements made by the Mariners, Rangers and Athletics. But, it is improvement.

Basically, the Astros will have more certified major leaguers on the roster than they had last season or the season before. That's a good thing and will make this team easier to watch for those of you who can do that sort of thing.