Talking about Michael Wacha's development and what it says about the Astros.

Got a great email over the weekend that prompted me to write way, way too much in response. So, after sending my reply, I decided to put the question and answer here to get our weekly mailbag rolling again. Most of the time, these questions will be ones we don't get to during the podcast each week through Twitter or chat submissions. But, every now and then, one might sneak in via email.

Anyways, here we go. Thanks to Weily for the question and hope you like the response.

I have several questions that have bugged me since last World Series. These questions might be naive since I am starting to learn more about player development (because as an Astros fan, this is the main thing to follow and gives me hope).

Obviously, Michael Wacha was one of the breakout stars of last year and is having a great spring so far.

How did 18 other teams miss getting him, including the Astros who had the first pick? 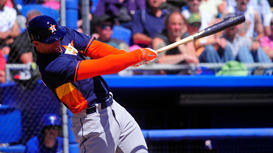 We covered George Springer and some other stuff.

Do you think Correa will be better than Wacha in the long run?

Are the Cardinals brilliant in this draft pick or were they just lucky?

What made Wacha so different that he was able to make it to the majors after just 1 year and several months in the minors?

Following those same lines, do you think Appel will make it to the majors next year after about 1 year?

On a slightly different note, should the Astros have taken Gray instead of Appel?

I just find it fascinating how players develop. You would think that with the amount of experts, time, money, and resources spent on scouting players it would be easy. It is interesting how this translate to business. As an owner of a medical practice, it makes feel better when I mess up and hire a bad employee despite all the vetting and interviewing we try to do. However, my business cannot spend a great amount of resources in trying to hire an employee as a baseball team can.

Way back when I used to work for the newspaper in College Station, I covered Wacha a handful of times. In those few interactions, I was very impressed with his feel for the game, how he understood what he threw and how to attack hitters. Even as a sophomore, you could tell he had the frame to be an innings-eater and would be an attractive draft target when he was eligible.

The problem with evaluating him, from a scouting perspective, is that his best pitch may be his changeup. More than his fastball, that change gives him a distinct ability to change speeds and keep hitters off-balance. A change like that thrown with Wacha's control can be devastating.

But, how can you tell whether the change is a big-league pitch or whether a pitcher with a decent change is taking advantage of unimpressive hitters? With a curve, a slider and maybe a fastball, you can see the movement, see the speed and tell how that might play.

With a change, everything is predicated on what it doesn't do. It may look like a fastball coming out of his hand, but it's slow. When is it thrown? How is it sequenced? All that is just as important as how good the actual pitch is.

I know some of our prospect guys refuse to put any stock in a changeup in the low minors. Remember when Jordan Lyles led the minors in strikeouts at Lexington? He did it primarily working off his change and just took advantage of overmatched hitters. You then saw how good Lyles' changeup really was when he struggled for the past three seasons in the majors.

So, all of that was hanging over Wacha's head in the draft. Obviously, he was a top prospect, but the uncertainty of that pitch probably forced teams to move him down their boards. That's also why a guy like Kevin Gausman, Kyle Zimmer and Andrew Heaney were all drafted before Wacha. They, too, were college arms, but they didn't rely so heavily on the change. 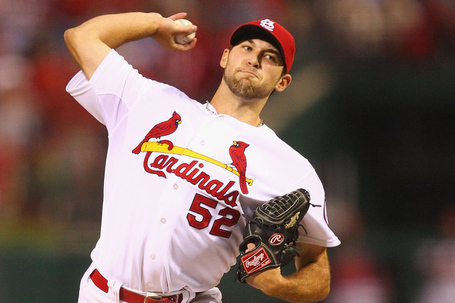 But, once Wacha got into the Cardinals system, that's when things changed. Then, he got to work under the tutelage of Houston's new pitching coach Brent Strom, who absolutely loves a good changeup. Strom could take a decent pitch and turn it into something great, which is what I surmise happened with Wacha. On the radio on Saturday, OKC broadcaster Alex Friedman said Wacha's first start against the RedHawks was pretty terrible. But, by midseason, he was good enough to be a huge part of the Cardinals' push to the postseason.

Wacha, an already polished college guy who understood how to pitch, just needed a little development before getting pushed to the majors. Strom and the Cardinals organization were able to provide that and, voila, a major league pitcher was born.

This is good news for Mark Appel, a similarly polished guy who has a good head on his shoulders when it comes to pitching. You'll hear scouts and coaches talk about "throwers" and "pitchers." Appel and Wacha certainly fit into the latter category.

Onto your other questions:

Correa should have more long-term value than Wacha. For one, he plays a position. Position guys tend to have more value than pitchers on average. Shortstop is the most premium position on the field. Even if Correa only spend six to eight years at the position before moving to third, he'll generate a ton of value with his bat and glove. That's hard for Wacha to match, unless he becomes a perennial Cy Young candidate.

The Cardinals are brilliant in how they evaluate the draft, but just as important is how they develop players. Anyone can draft Allen Craig, but turning him into a big leaguer takes patience, good coaching and a dash of luck. Looking at all the guys who took a step forward in Houston's system last year, it looks like the Astros may be setting up a similar system for player development.

Finally, I do not think that the Astros made a mistake on Gray. He's got some "helium" now (fancy scouting term for a fast riser), but he's also doing it against low-level competition in a very small sample size. It's silly that some prospectors are jumping Gray over Appel based on the small amount of professional time each got.

If they're still saying that at the end of this season, we'll revisit your question, but for now, Houston made the right call.

To get your question answered in the TCB mailbag, email us at m.david.colemanATgmail.com, find us on Twitter @CrawfishBoxes or join our live podcast threads at 7 p.m. Sunday evenings starting this Sunday and continuing throughout the regular season.