Astros 2014 season: The value of on-base percentage hits the lineup

This may not be an imposing lineup, but will it get on base more often than in previous seasons?

Share All sharing options for: Astros 2014 season: The value of on-base percentage hits the lineup

Did you know that the Astros have lost nine of their last 10 spring training games? Or that they haven't scored more than three runs in a single game since March 14 when they lost 6-4 to the Cardinals?

You can forgive even the most die-hard fans if they're a little skeptical of the team's lineup heading into the season. Despite some high-profile acquisitions, it seems like the Astros will once again struggle to score runs and struggle to win games.

Do the Astros need another left-handed bat?

Clack also check in on the Rangers to see if their big-ticket additions will help in 2014.

Do the Astros need another left-handed bat? Touring the Rangers

Pick your punching bag. It's either L.J. Hoes in right field or Robbie Grossman in left. It could be Marc Krauss and Jesus Guzman at first base or Chris Carter and his many, technicolor strikeouts. Maybe you're afraid that Jason Castro will regress and Jose Altuve won't bounce back from a bad year.

We've all been there. But, it's important to note that the Astros do figure to be significantly improved in one very important area in 2014: on-base percentage.

We assume Jeff Luhnow and his rocket scientist front office value on-base percentage, because the geek baseball prophet, Bill James, told us it's important. Walks translate to runs. Runs translate to wins. OBP used to be an undervalued asset, until Billy Beane and Moneyball ruined everything.

Now, OBP is a valuable commodity, which means it took Luhnow a while to reverse the great dying that saw Houston's team number to drop from a decade-high .342 in 2004 to .303 in Ed Wade's last season in 2010. Under Wade, Houston valued hitters like Carlos Lee and Miguel Tejada who made contact above all else. That led to small walk rates and small strikeout rates, but also an offense that was broken.

It hasn't been an easy road back, but the Astros are projected to make a pretty significant leap in the OBP department in 2014. 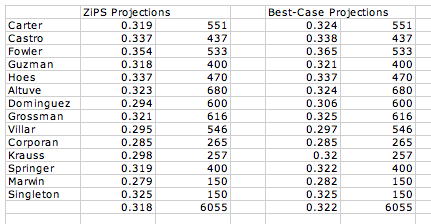 To figure out what their projected OBP might be in 2014, I took the top 14 hitters who may contribute this season and weighted their projected on-base numbers by the likely number of plate appearances they will receive. I ended up with 6055 PAs for 14 players, including two catchers (Jason Castro and Carlos Corporan), four outfielders (Dexter Fowler, Bob Grossman, L.J. Hoes and George Springer), four DH/first base types (Chris Carter, Jesus Guzman, Jon Singleton and Marc Krauss) and four infielders (Jose Altuve, Jonathan Villar, Marwin Gonzalez and Matt Dominguez).

The system isn't perfect, as guys like Cesar Izturis and Adron Chambers weren't weighted. But, their contributions in terms of PAs will likely be small enough to not move the needle much on the results.

For the first set of projections, I used Dan Szymborski's ZiPS marks exclusively. Houston ended up with a league-average OBP of .318, improving by 19 points over last season. Dexter Fowler made the biggest difference with a .354 OBP, but six different players posted league-average or higher OBPs in this method.

In the second set, I used the most optimistic projection from either ZiPS, Steamer and Oliver and the results came out even higher. In that scenario, Houston's OBP increased to .322.

That would have given Houston the 13th-highest OBP in all of baseball last season. If they somehow managed to creep up a couple ticks more, they could crash the top 10, where the Rangers, Diamondbacks and Rockies were all tied at .323. Even if they only hit the ZiPS numbers of .318, they'd be tied for 15th overall in the majors.

As the other writers have been telling me the past few days, there are a lot of "ifs" in this analysis. But, the takeaway should be that this lineup, warts and all, will get on base much more efficiently than at any time in the past four years.