We continue our tour with a look at the Texas Rangers

Share All sharing options for: Spring training 2014: Touring the Rangers

The Texas Rangers' winter was spiced up with notable quotes. Ian Kinsler, chafing at his trade to the Tigers, hopes that the Rangers go 0-162 in 2014. Manager Ron Washington, chafing at criticism of his anti-sabermetrics approach to sacrifice bunts, told the press to shove the bleeping analytics up their you-know-what.

I doubt that Kinsler gets his wish. If you are a fan of a Rangers' rival, the most you can hope is that Kinsler's trade becomes a Babe Ruth-like curse. Washington is likely to continue giving up runs with his tactical practices, but on-field tactics are not a manager's most significant impact. And Washington appears to be quite good at managing a diverse group of personalities and maintaining the respect of players. Heck, Kinsler's comments--including a description of arguments with other Rangers' players--probably indicate that managing the team's cohesiveness was more difficult than we knew. 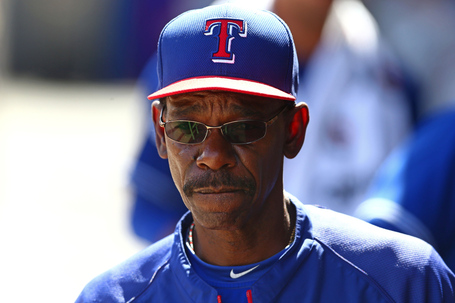 What do we know about the Rangers? First, they are a talented veteran team. Second, they are likely to be in the hunt for an AL West division title, or (at the least) a playoff spot. Third, the team underwent significant changes over the off-season.

The Rangers, who play in a very hitter friendly home ballpark, were somewhat disappointing on the offensive side in 2013, and the front office took aim at fortifying the offense in 2014---even if it came at a very high monetary cost. The Rangers signed free agent outfielder Shin Soo Choo, and traded for slugging first baseman Prince Fielder. Sabermetrics tells us to follow the OBP, and the Rangers added a ton of OBP to their lineup (Choo had a .420 OBP last year and Fielder has a career OBP of ;389). You could also say that the Rangers added a ton, period; but then, again, the Fielder jokes write themselves. The Rangers may have to pay the piper down the road with the huge multi-year contracts for Choo and Fielder, but it's hard to blame the front office for making bold moves during the window of playoff contention.

There is a question about the off-season, though. Did the Rangers make a mistake by concentrating on the offense and ignoring the pitching? The grounds for skepticism are real.

2013 Rangers By the Numbers

Looking at the advanced statistics, above, we can understand why the Rangers' front office wanted to fortify the offense. The defense and pitching was a team strength last season. So, why is their skepticism of the Rangers' lack of significant pitching moves? Due to injuries, the middle and bottom part of the rotation is a question mark. So, let's proceed to the pitching.

The top of the rotation is very good. Yu Darvish is a legitimate ace. A rare 5 WAR pitcher, he strikes out bunches of hitters (11.3 K/9), pitches deeply into games (209 IP), and put up a sub-3 ERA and x-FIP in 2013. 23 year old lefty Martin Perez appears set to be the No. 2 pitcher. Perez is a top prospect who finally showed why last year, posting a 3.62 ERA and a 4.04 x-FIP in 124 innings. Is there room for regression in performance at the top of the rotation? Probably. Darvish had a low BABIP (.264) and Perez could suffer a sophomore decline, considering that his ERA was below his FIP. But, even if their ERA declines a bit, Darvish and Perez are very talented pitchers whom most teams would love to have at the top of their rotation.

However, the slight gnashing of teeth in Rangers-land is due to the cloudiness of the rotation past the first two slots. Derek Holland had a terrific season last year (4.8 WAR) and was a key part of the Rangers' pitching prowess in 2013. But Holland stumbled over his dog (yes, the causes of off-season baseball injuries continue to be hilarious), and sustained a knee injury which will keep him off the field until mid-season. 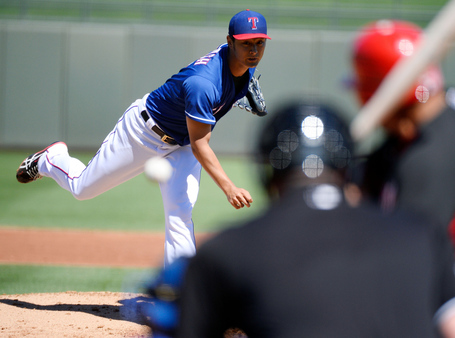 Matt Harrison had two back surgeries and pitched only 10 innings last year. The Rangers hope the veteran lefthander will take one of the rotation spots, but it's hard to bet on a pitcher coming off of a back injury. Alexi Ogando, who excelled as a hard throwing reliever, was inconsistent as a starting pitcher last year, and will be in the mix for a rotation slot. Not surprisingly, Ogando loses several miles per hour on his fastball as a starter, which may add to his inconsistency. Colby Lewis was signed to a minor league deal, but hasn't pitched in 1.5 years, due to arm injury. You have to figure that his odds for an effective return may be slimmer than for Harrison and Ogando. Nick Tepesch pitched almost 100 innings last year, and could be a reasonable, if not exciting, rotation option. A couple of the team's young and effective relievers, Tanner Scheppers and Robbie Ross, are also potential starting candidates. Retreads Tommy Hanson and Joe Saunders have been signed with the hope that a rebound is possible. The Rangers have also brought an aging Jose Contreras to camp, but I'm sure that Rangers fans hope he will pitch in Round Rock, not Arlington.

Let us take a look at the shiny and new edition of the Mariners.

So, where does that leave the rotation? There is enough uncertainty in spots 3 through 5 that a disaster scenario is plausible, even if unlikely. If the Rangers get bad breaks in addressing those rotation slots, it's possible that the Rangers return to the old days of giving up too many runs. But my guess is that the Rangers have so many options that they will piece together enough pitching in the bottom of the rotation to support the revamped and powerful offense. The Rangers proved capable of piecing together the rotation last year when injuries occurred; they likely can do it again. But there is a risk. And the Rangers can't stand a significant injury to the top pitchers, Perez and Darvish.

The bullpen was a strength last year, and likely will continue to be more than adequate. The closer, Joe Nathan left for more dollars in Detroit, but the Rangers have enough depth to replace him. Neftali Feliz is the likely replacement, but Joakim Soria and Jason Fraser also have closer experience. If Ross and Scheppers don't make the rotation, they provide excellent long relief capability.

The Rangers lost Kinsler, Nelson Cruz, A.J. Pierzinski, and David Murphy during the off-season, but the front office more than than compensated with the addition of Fielder and Choo. Fangraphs projects the Rangers to have the 5th best batting WAR in the majors. Quite an improvement over the 14th rank in 2013, right?

You have to like the balance of offense and defense in the outfield with Choo, Rios, and Martin as the likely starters. Beltre and Andrus on the left side of the diamond are very effective on both offense and defense, with Fangraphs projecting them to lead the Rangers in position player WAR (4.8 and 3.3, respectively). Fielder has gone to slugger heaven, hitting in this ballpark, but he will be a downgrade at 1b on defense. Mitch Moreland likely will be the DH, but arguably a better strategy is to play Moreland at 1b and use Fielder as the DH. However, Fielder's pay grade may keep that from happening. 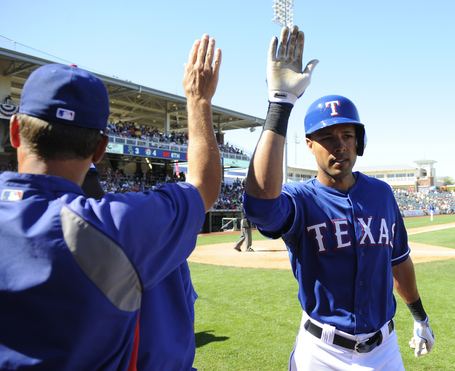 The question mark is Jurickson Profar, the anointed replacement for Kinsler. The former uber prospect and one time little league world series star, was not impressive on offense in 2013. However, he is very young, and has the minor league batting stats to make us project him as at least an adequate hitter. Fangraphs projects a .318 wOBA for Profar, which will be sufficient in this lineup. Fangraphs also projects a 2.1 WAR, driven in part by good defense.

Last year the Rangers' offensive splits reflected a team which was very effective against LHP, but below average against RHP. With the addition of Choo and Fielder, the weakness against RHP likely has been eliminated. In 2014, the opposition's lefthanded relievers will be kept busy when Choo and Fielder come to bat late in games.

According to Fangraphs projected standings, the Rangers are in for a dog fight in the AL West. All four teams above the Astros are projected to be evenly matched in terms of team strength. Fangraphs projects that the Angels and A's will be tied for the top spot with 85 wins. The Rangers are one game behind that pace, and the Mariners are only two games behind the leaders. According to Fangraphs' projected standings, the Rangers would take one of the Wild Card slots, but it's no shoo-in, with several teams in close contention. The projection is so close that you can probably flip a coin for your expectations of the Rangers' chances for winning the division or taking a wild card spot.