Share All sharing options for: Spring training 2014: Touring the Athletics

With a 96-66 record and a division title, it was the best year for the A's in a decade, literally; ten years prior, fresh off their Moneyball magic 103 win season, Oakland posted an identical 96-66 record whilst taking the AL West crown in 2003. They lost to the Detroit Tigers in the American League Division Series, three games to two.

Their success was a product of a balanced approach; they posted a team wRC+ of 108, which was tied for third in the Majors with the Rays and Angels, and also a team 3.56 ERA, fifth in the Majors (and second just behind the Royals in the American League). 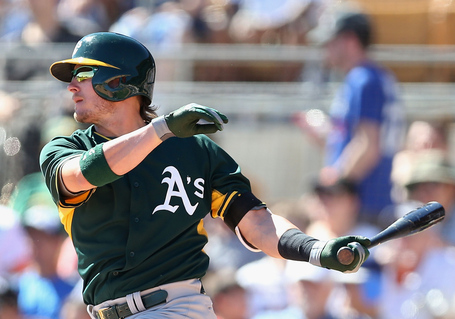 Centerfielder Coco Crisp knocked 22 homers and stole 21 bases, the latter total being the best on the team. Outfielder Yoenis Cespedes suffered from a sophomore slump but still contributed 26 home runs, the second-best mark on the team.

Shortstop Jed Lowrie, acquired from Houston prior to the season, had the third-best OPS (122) on the team and hit 15 long balls. All told, seven of the nine regular players hit 12 or more home runs, and six of nine finished with above-average OPS+ numbers of 103 or better. 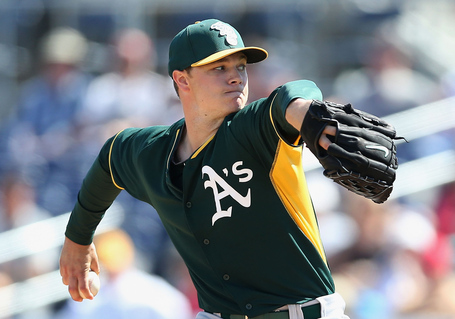 Bartolo Colon was the team's best hurler, baffling hitters and analysts alike, riding his insanely-fastball-centric approach to a team-best 4.03 K/BB ratio and 141 ERA+ (among starters). No other Oakland regular starting pitcher had 100 ERA+ or better, but neither did any of them have an ERA+ under 90. A.J. Griffin led the rotation with exactly 200 innings pitched and a 97 ERA+, as well as a team-best 171 strikeouts.

Jarrod Parker was the third starter who approached the 200 inning mark with 197 innings, and a solid 94 ERA+. Top prospect Sonny Gray joined the rotation in August and dazzled, posting a 140 ERA+ in 67 innings and helping to carry the team into the playoffs.

Closer Grant Balfour was dominant late in games, racking up 38 saves with a 145 ERA+ and a team-best 10.3 K/9. Ryan Cook, Sean Doolittle and Jerry Blevins filled out the back end of the bullpen with ERAs of 2.54, 3.13 and 3.15 respectively. No pitcher on the entire team with 50 or more innings pitched posted an ERA+ worse than 90.

Note: stats are listed as 1st, 5th etc. in terms of how good they were compared to the rest of the league, not the highest or lowest. For example, the K% was the 20th lowest mark in the Majors, but the 11th "best" mark in the Majors (because a lower strikeout rate is better).

Josh Donaldson: After hitting .301/.384/.499 with 24 homers and a 15.3 UZR rating (which made him good for a sparkling 7.7 WAR), Donaldson could regress significantly and still be a very good player. The good news for Oakland is that, while some regression is likely in store, there's nothing in Donaldson's numbers that jumps out and indicates that last season was a fluke. His .333 BABIP was a bit high, but not shockingly so, and his walk rate, strikeout rate and ISO were all within the area you might expect given what he has shown in the minors. I like Oliver's projection for him; .284/.367/.466 with 20 homers after a bit of BABIP regression. With his strong glove, that should place him squarely in the 4.5-5.0 WAR range, which would still make him easily a top five third baseman in 2014. 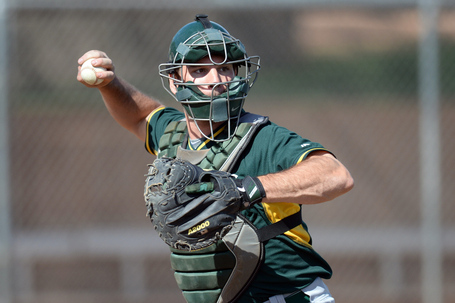 John Jaso: Much like Donaldson, Jaso is an easy pick for regression, but the regression may not be too hard of a hit. While his average is likely to fall back to around the .255 range, historically he's hit for more power than he did last year, so his overall offensive production could remain the same, or at least see only a marginal decline. Advanced metrics have never been fond for his glove though, so his value in terms of WAR may still be mediocre.

Jarrod Parker: He'll either need to miss more bats or induce more grounders. The .260 BABIP isn't going to be sustainable, and he may give up a few more homers as well. The good news is that he's still young and could continue to adjust to Major League hitters, but if not, a half run increase to his already-mediocre ERA from 2013 (3.97) is quite possible.

Yoenis Cespedes: This is the easy one. Aside from home runs, Cespedes saw a significant drop off in virtually every way last year from his 2012 breakthrough rookie campaign. He stole less than twice as many bases (despite playing in more games), saw retrogression in both walk and strikeout rates, and though his home run total saw a slight increase, it was in more games and his ISO dipped a bit. While a return to his 2012 form may be slightly optimistic, a boost is likely (Oliver, Steamer and ZiPS all forecast a boost in OPS of .035 or better). Add to that the fact that his defense was actually better in 2013, and Cespedes could easily put a 3.5 WAR season up for the A's.

Josh Reddick: Remember that first week of the season when Reddick made a sliding catch in right field in Minute Maid Park against the Astros? He strained his right wrist, and though he gave a gutsy effort, wasn't the same all year. He spent two 15 day stretches on the DL for the strained wrist in May and October, and finally had to have surgery to correct the problem in the off season. Amazingly, despite such a serious injury (In terms of difficulty, I imagine that hitting Major League pitching with a strained wrist is somewhere in the neighborhood with sumo wrestling a gorilla with both hands tied behind your back), Reddick actually saw improvements in both walk and strikeout rate while maintaining his Gold Glove caliber defense, contributing a rock-solid 2.7 WAR to Oakland's cause. If that's him injured, watch out if he's healthy this year; hard to see him as less than a 3.5 WAR player, if not better. 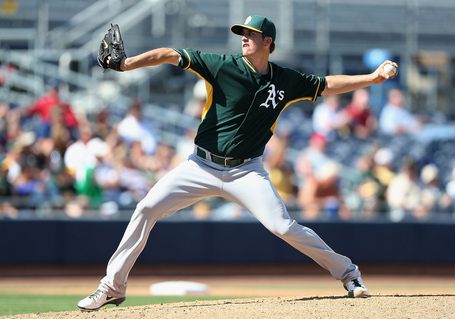 Drew Pomeranz: Well, he wasn't on the A's last year, so maybe this is cheating in a way, but he's with them now, and I'm predicting his 2014 season to be significantly better than his 2013 season, so I'm saying it counts. Why do I like him to rebound (or maybe you'd even call it breaking out, but he was pretty solid in 2012 considering he was pitching in Coors)? Let's start with his numbers in AAA; ignore the ERA, partially a product of playing at Colorado Springs (thanks to the elevation, it's consistently one of the five most hitter-friendly ballparks in the Minors, right up there with High Desert, Lancaster and Albuquerque), and instead focus on the peripherals. A massive strikeout rate, reasonable walk rate and solid ground ball rate led to a nice 3.13 FIP. After being promoted, he showed the solid strikeout rate again that he did back in 2012, but a small sample spike in walk rate (which should come down) and HR/FB ratio (which should really come down) left him with an ugly ERA. Colorado foolishly gave up on him, and Billy Beane swooped in. He could easily be the third best pitcher in an Oakland rotation bursting with talented former top prospects.

Down on the Farm

Addison Russell is the biggest name. One baseball's top prospects, the shortstop seemed to still be a bit far off to contribute early and often in 2014, but after a strong showing in the Arizona Fall League, he could be in an A's uniform sooner rather than later. At that point, Eric Sogard's days as a start could be numbered, with Russell, Lowrie, Donaldson and Moss forming one of the best infields in baseball if all goes right.


Outside of Russell, there isn't a lot of flash star power, and the upper levels have been thinned thanks to promotions and trades. While there's not a great deal there, the depth built into the Major League roster, as well as the relative youthfulness of its players, should mean that Oakland won't need as much help from AAA and AA as some teams might. Outside of Max Muncy, Miles Head, Drew Granier and a few others, there's not a great deal that isn't just replacement filler.

Farther down, things are more promising, with talented arms like Michael Ynoa, Bobby Wahl, Raul Alcantara and Nolan Sanburn will continue to polish their games, and they could all be ready in the next 2-3 seasons. Billy McKinney, Chris Bostick, B.J. Boyd and Renato Nunez show some promise as future position players, but with Oakland's lean towards college players in the draft, the system doesn't have a tremendous amount of high-upside position player prospects.

For the most part, I really like what Oakland did during the offseason. Jim Johnson isn't a special closer, but he's solid and reliable, and his low career HR/FB% is no fluke, thanks to his excellent ground ball tendencies; this makes him somewhat less prone to meltdowns and home run heartbreaks at the end of games. Jemile Weeks is still intriguing, but he has no power and isn't an elite base stealer either, so he has to hit and walk a lot to have value, and he simply hasn't so far (and he's 27 already to boot).

The Scott Kazmir signing was a risky one, but the potential payout is huge. Kazmir was very solid for Cleveland last year, even more than his ERA might indicate, and health is the only question with him. Having committed just $11 million a year for the next two years to him, a blowup wouldn't be a crippling disaster, and if he's healthy, he could end up being the ace of the Oakland staff. The acquisitions of O'Flaherty and Gregerson to go along with Johnson gives the A's a rock solid bullpen. 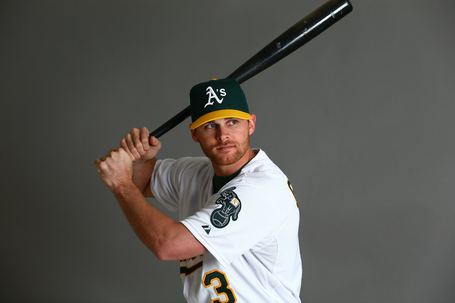 The biggest shocker, and my only real quibble with the A's offseason, was dealing away Michael Choice, an excellent young outfield prospect, for Craig Gentry and Josh Lindblom. Gentry is a fantastic defensive outfielder with no shortage of speed, but he has no power and has never played a full season as a regular. Lindblom is semi-young, but he's a middle reliever. If what Gentry did the last two years is sustainable, the trade will look good, but if not, this one could come back to haunt Oakland for years.

When you consider that all they lost in free agency was a middle reliever, a catcher they no longer needed and an inconsistent outfielder they easily replaced, it's hard not to think of Oakland's offseason as a rousing success. Losing Choice hurts a bit, but with such an incredibly balanced, deep team, with above-average players at almost every position on both offense, defense and the mound, the A's are stacked.

Texas should be their main competitor, but their pitching is highly suspect outside of Yu Darvish, and while the Angels' rotation looks a little more stable, the Pujols and Hamilton questions remain as valid concerns. Even if all goes well for those two clubs though, they simply can't match Oakland in terms of stability, health, youth and depth in all aspects of the game. The division title is Oakland's to lose.