CRPerry13 takes a look at how the Astros fare using the difference between strikeout and walk ratios.

Back in July, TCB writer Seth Drennan wrote two excellent stories about the Astros' penchant for acquiring players with high Strikeout-to-Walk (K/BB) ratios. His work focused on the organizational level and found that the younger the Astros' league, the better it scored in K/BB. One can infer that, since the upper levels are more heavily peppered with Ed Wade and Bobby Heck acquisitions and the lower are almost entirely of the Jeff Luhnow regime, that the Astros' current strategy weights K/BB heavily.

Or rather, it weights strikeouts, walks, and the relationship between the two heavily, which is not the same thing.

FIP is one of the best and most easily-calculable pitching statistics used these days. It's one of the best because it is wholly dependent on variables that have a high year-to-year correlation, which are also more under a pitcher's control than, say, earned runs. The variables that go into the FIP calculation are strikeouts, walks, home runs, and hit-by-pitch.

The year-to-year correlation is important, because this is the "proof" behind sabermetric stats that most old-schoolers do not understand. It works like this (oversimplification alert!): Calculate FIP for all players for all recent seasons. Compare each player's yearly FIP to his ERA for the next season. If it is a 1-to-1 correlation, then his FIP is identical to his ERA. The higher the correlation, the better the stat (FIP) is at predicting next year's ERA. This same method can be applied to all stats, and Steve Saude over at Fangraphs has published a nifty year-by-year pitching stat correlation tool that does all this for you. FIP has a base correlation with ERA of 0.358, which is actually higher than it sounds, but not as good as a lot of other things.

But I'm not here to talk about FIP, other than that it's based on strikeouts and walks.

The other day, while I wasted time planning my fantasy baseball season, I stumbled across a Yahoo! article by Michael Salfino, in which he admonished fantasy managers that they should not use K/BB at all. His point was that it is misleading, though he doesn't go into as much detail about why as this post on Beyond the Box Score by Glenn DuPaul entitled, "Stop using K/BB!" (Recommended reading)

Intrigued, because every stats site on the internet uses K/BB as a metric, as do scouts and front offices, I absorbed the proffered information. And I learned that Salfino and DuPaul are absolutely correct. For one thing, K/BB has only a .270 correlation with next season's ERA and only a .541 correlation with next year's K/BB. In other words, it's not consistent year-to-year, nor is it predictive of anything.

It is also, as both authors suggest, misleading. Consider the example DuPaul gives:

If using K/BB to evaluate, Player 2 looks like a heckuva guy. Pulling back the curtain reveals Player 1 to be Yu Darvish and Player 2 to be Joe Blanton. Blanton's miniscule walk rate in 2012 inflated his K/BB to the point where he looks like he's a significantly better pitcher than he is.

A high or low walk rate can have a very large impact on K/BB while having little impact on run prevention.

Both authors posit the same thing: K/BB doesn't work, because it assumes equal weight between walks and strikeouts. Which just can't be true, because a strikeout definitely gives the pitcher an out, whereas a walk doesn't always lead to a run scored. From that standpoint, a high or low walk rate can have a very large impact on K/BB while having little impact on run prevention.

Stats like FIP, xFIP, pFIP, and others, try to establish the actual correlation between strikeouts and walks, but for the rest of us, there's an easier solution that gets us a lot closer to reality without having to use anything more than an abacus. Subtract walks from strikeouts and divide by total plate appearances. K% minus BB%.

It's rough, it's sloppy, but it also works a lot better. K-BB% has a .367 correlation with next year's ERA, far better than BB/K and surprisingly even better than FIP. K-BB% also has a .607 correlation with itself, meaning it is more consistent year-to-year for individual pitchers than K/BB is.

With that in mind, here is a look at the 2014 Astros' pitching staff, colored to compare with league average: 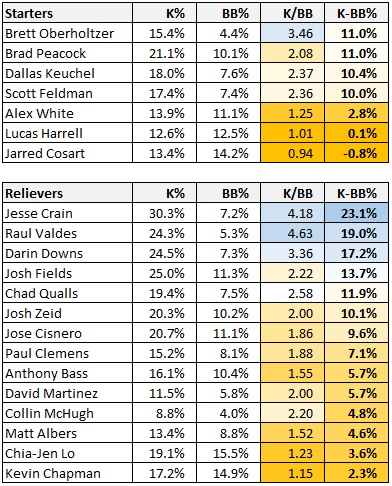 Not surprisingly, none of the Astros starters graded better than league average in K-BB%, which matches what our eyeballs tell us. K/BB was kinder to Brett Oberholtzer and his microscopic walk rate. If one judged Oberholtzer on K/BB, one might decide that he is one of the better pitchers in the league. However, K-BB% shows that his high K/BB is based on an extremely low strikeout rate, coupled with one of the lowest walk rates in baseball. Lucas Harrell and Jarred Cosart ranked among the very worst in MLB in both K/BB and K-BB%.

None of this is unexpected, since the Astros' rotation features no pitchers known for large strikeout numbers. The relievers paint a rosier picture, particularly those added during this off-season. Jesse Crain's K-BB% is almost twice league average. Josh Fields is a great example of a player whose below-average K/BB does not tell the whole story, as it's inflated by a high walk rate paired with an exceptional strikeout rate, similar to Darvish in the example above.

None of this is to suggest that Seth's articles are incorrect, inconclusive, or dumb. His observation of K/BB is useful and instructive. It does pique my curiosity to see the same analysis done with K-BB% and to speculate whether the Astros are using K-BB or even some other stat that more closely matches the profiles of players acquired over the past couple seasons.