Spring training 2014: The viability of the Astros carrying three catchers

Three catchers enter spring training. How many will leave on the Opening Day roster?

Share All sharing options for: Spring training 2014: The viability of the Astros carrying three catchers

Jason Castro is the starter. Carlos Corporan is the backup. Max Stassi is the up-and-comer.

There's only room for two catchers on the roster, though, so who is the odd backstop out? Because I've become obsessed with backup positions on this 60-win team, this has bothered me for a couple weeks now. All three have legitimate cases to make the roster. If Houston plays Castro more at DH/1B, could they make it work with three catchers?

More of our coverage of spring training, including other hard-hitting backup questions.

Well, yes and no. Take a look at how many plate appearances Houston has gotten from its catchers in the last five years, coupled with the number of catchers who have gotten PAs in that year.

Sharp-eyed readers might assume the drastic shift up in PAs last season might be due to Houston switching to the American League. That's a plausible theory, except the NL actually had more average PAs per team at the catcher position than the AL last year, 655 to 639.

One change last season that did affect things was Castro's health. Having a full-time starter at the position meant Houston had a catcher with over 400 plate appearances for the first time since Brad Ausmus in 2006. The split last season wasn't much different than in years past, though. 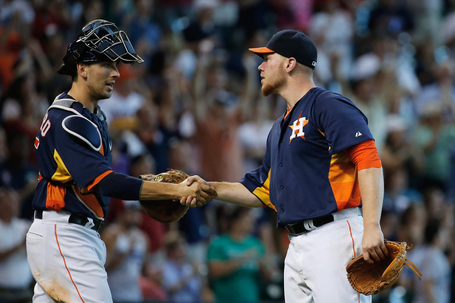 If the Astros get around 645 PAs from that catcher position in 2014 and Castro takes around 450 of those (41 less than he had in 2013), that only leaves 195 more for a backup. It's hard to cut that between two guys, meaning Corporan or Stassi are likely to win the backup job outright and take those plate appearances.

Handing the job to Stassi would be a bit of a coup. Houston has had 58 rookie catchers get 10 or more plate appearances in a season. Of those, only 20 have recorded 150 or more PAs. Of course, Craig Biggio tops the list with 509 PAs in 1989 while four more had at least 400.

The problem, then, comes down to Stassi's development. What future role does Houston see Stassi filling? Can they slice out enough time for him to get consistent at-bats and continue to reach his potential. Or, do they view him as a future backup and are okay with him getting 200 or less PAs this season?

Also, they'd be giving up on a nice backup catcher in Corporan, who has posted above-average defensive stats in each of the past three seasons. Despite defensive metrics for catchers being problematic, Corp provides value as a MLB-proven backup backstop. Houston could trade him, but the presence of Stassi likely depresses his value some.

If the choice isn't between Corporan or Stassi, can they carry three? In that situation, it seems like Stassi's development gets suppressed even more than if he were the primary backup. To fix that, Houston could send him to first base or DH, but that takes away at-bats from Chris Carter or the glut of first basemen/left fielders on the roster.

Also, having three catchers on the roster limits Houston's flexibility with its other backups. Does that third catcher replace a fifth outfielder? A second infielder? That puts an awful lot of pressure on Cesar Izturis or Marwin Gonzalez to play multiple positions and makes depth thin in general.

For all of those reasons, it seems highly unlikely that all three catchers make the Opening Day roster. The most likely scenario seems to be Castro and Corporan in the majors while Stassi heads to Triple-A as an insurance policy.

What do you think? How do you see this playing out? Will any of the three be able to influence the decision based on their play this spring?