Talking about spring training news, the best offseason moves and another text from Bo...

Some things to talk about while you marvel at bacon salt...

Oh, boy. Some stuff besides the sad news about Japhet Amador came out this morning. Here's the list, in order of importance.

First, Jesse Crain suffered a calf strain that needed an MRI. It won't affect his work on rehabbing his arm and Jeff Luhnow characterized him as "day-to-day" according to Evan Drellich.

Next up, Bo Porter lit into the team after their daily "synergistic chemistry lab" for "disrespectful" attitudes before Roger Clemens met with the team.

There's a lot to unpack in that statement. Let's start with something I completely missed talking about/making fun of and that's the synergistic chemistry lab. I want to know more about it. So much more. How did they come up with the name? How many times will Drellich bait Porter into saying it in one press conference? Do the players get graded on their synergy? Are there lab experiments, or do those just consist of seeing who can get the highest score on Flappy Bird? So, so many questions.

Apparently, the players took Porter's mini-rant in stride. Oberholtzer was quoted in McTaggart's story as saying, "As a manager, you have to be that way I feel like. With a younger ballclub in the Major League, it works."

Unsaid: With a more veteran group, it doesn't. As the Astros move out of this youth mode, Porter will have to pick and choose his lectures, lest he lose the team. For now, though, it's okay. Feel free to speculate on which player wasn't dressed for lab time with Clemens.

Lastly, Jon Singleton still hasn't reported. He's allegedly staying behind for his girlfriend's birthday. He is due to be at the first spring workout and the team is officially okay with this. It's not a reflection on Singleton's desire. It's not a reflection on his dedication or his prospect status. It's one day and it didn't even break the rules.

2) Best deals of the offseason

Dave Cameron over at FanGraphs breaks down the best deals of the offseason. Houston's trade for Dexter Fowler clocks in at No. 7. Here's what Cameron had to say:

It's easy to rattle off Fowler's flaws, ranging from his big home/road splits to his propensity for striking out without offsetting it with a ton of power. However, even with his warts, Fowler has been an above average outfielder for the last three years running, and is just 28 years old, so a short term spike can't be ruled out. In exchange for two reasonably priced arbitration years of a quality player with remaining upside, the Astros gave up two fringe talents that they won't miss in any real way. This move flew under the radar because it was completed during the busiest day of the off-season, but the Astros picked up a ton of value in this deal.

Fowler's addition may be the biggest storyline for the upcoming season. We're not talking about it enough. Sure, Fowler may struggle due to his home/road splits, but I wouldn't count on it. There's a very good chance Fowler will post the best season by an Astros position player in 2014. His combination of power, defense, speed and on-base skill means he can be a force even if he doesn't hit for average.

What's more, Fowler fills a very big hole in the lineup. He's worth quite a few wins over 2013 and will give Houston its most reliable leadoff guys since 2009 Michael Bourn. If he doesn't score 100 runs this year, I'll be shocked.

The only thing that hurts about Cameron's list is Houston had two other potential deals on there that didn't happen. If they had managed to land Jose Abreu and Josh Johnson, they'd have also had the No. 10 and No. 4 best deals. As is, I'll settle for one of the ten. Adding proven major league players to this roster will make 2014 much more watchable (if I had CSNH, which I don't).

3) My daily text from Bo 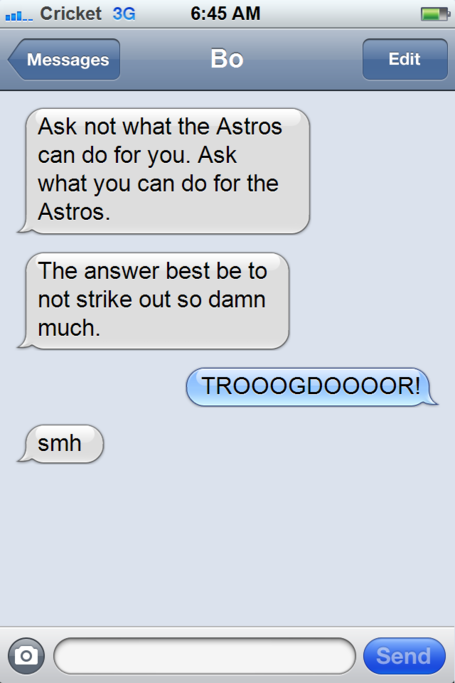