It's that time of year again, when sites (not unlike this one) unveil themed tournaments that coincide with the NCAA Basketball Tournament termed March Madness. It just so happens that a themed tournament fits very well with baseball's preseason. Starting Wednesday February 19, 2014, 64 players will begin going head-to-head in 63 voting matchups to determine who is the TCB Astros Fan Favorite March Madness Tournament Champion. Which will be announced March 31, 2014. 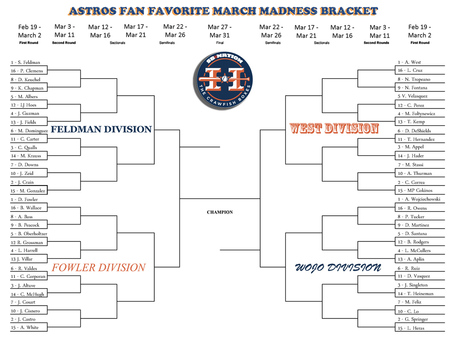 Like last year, each match-up will feature a short description of the player, highlighting some of the positive things he's done in his professional career. For the first three rounds a poll will be available for 24-hours to vote on your favorite player or the player who you think should advance to the next round. Rounds four and five will have two voting days and the final matchup will be three voting days. The winner of each match-up leading up to the final will be determined by the player who gets the most votes. The player with the most votes advances; the player with the least amount of votes exits the tournament.

Methodology for Players and Rankings

The second sectional round will be March 17 - March 21, 4 match-ups, one post a day, two voting days.

The finals will be March 27 - March 31, this vote will last three days with the winner being announced Monday March 31, 2013.