The Forgotten Eight: Astros With Upside

While fans drool over a loaded farm system, these eight players are the same age or younger than top prospect George Springer, have high pedigrees of their own, and already have MLB experience.

Share All sharing options for: The Forgotten Eight: Astros With Upside

"George Springer is the best baseball prospect since Ty Cobb"
David Coleman, 2014 (Ed Note: That quote is paraphrased, or even completely fabricated.)

When undergoing personal trauma, such as experiencing fandom of a baseball team that has lost a combined 324 games during the past three seasons, a person may find and cling to a metaphoric savior to get them through the hardship. The tortured soul identifies a person or thing capable of dragging the sufferers out of the doldrums of decrepitude and into a glorious and aggrandized future. The savior may succeed. Or it may not.

As the sorrower clings to the idea of that savior, that life raft of hope, unfortunately he misses the opportunities of the present. He has become tunnel-visioned, fixed on the idea that only this one person/thing/group can be the solution. As he passes on his glum journey, viable alternatives reach out, begging to be noticed. But he trudges on, oblivious. The alternatives shrug their shoulders and say, "Yes, we know the Astros have an amazing farm system. But what about us?"

What about you? You were a part of the Astros’ worst season in franchise history! Why should you count? You had your chance last season, and you let us down. "Wait!" cry the voices of the present. "Look closer! See, we are still young! We have ability, credentials, projection! You can have your savior, but don’t pass us by."

But the sufferer treads on heedlessly, eyes fixed on an imaginary future as he ignores the opportunities of the present.

Now that your attention has been grabbed by unnecessary melodrama, I’ll get to the point. George Springer is understandibly a reason for Astros fans to get excited. The 24-year-old top prospect will have his chance to explode into Major League Baseball during the 2014 season. But the Astros already field a number of "former" top prospects. Blog-reading fans have a tendency to look ahead to what could be great (because it’s fun to speculate!) and forget who is already here and what got them here in the first place.

Below are eight Astros, only one of whom still retains rookie status for the 2014 season. All of these players have credentials nearly-as-good or better than George Springer’s. All have legitimate star-level ceilings, though with varying likelihood of reaching it. All will be the same age or younger than George Springer on Opening Day 2014. The blurbs in this article are intentionally positive, to remind fans that the players already on the roster really do have highest-level talent and could break out and be the next face of the franchise. 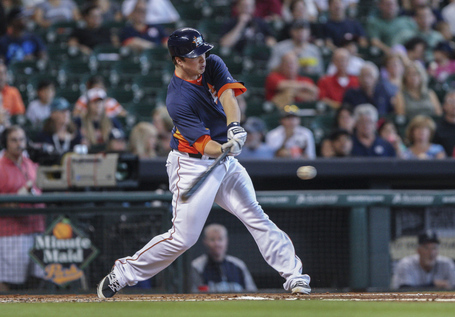 Acquired: 12th-overall pick by the Florida Marlins in 2007. Unbelievably, acquired by the Astros in trade for Carlos Lee’s half-season swan song in July 2012.

Quotable: "Any discussion of Dominguez begins with his glove, as most scouts label him the best defensive third baseman in the minors. He has outstanding instincts, reacts well, has soft hands, and a strong, accurate arm. While his offensive statistics have failed to impress, he was just 17 when drafted and has consistently been young for his level. He has a patient approach and solid-average power."
Kevin Goldstein, Baseball Prospectus, Dec. 2010

Scouting Report: "Dominguez has the tools to hit, with quick hands that he should learn to trust. … His other tools are excellent, particularly defensively, where he's drawn comparisons to Ryan Zimmerman. Dominguez has a well-above-average arm, and with his supple hands and quick release, it plays as well as Moustakas' 80 arm. He does everything easily defensively and is a solid runner."
Baseball America, Jun. 2007 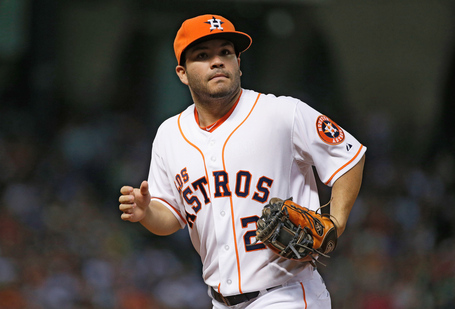 Acquired: International Free Agent signee by the Astros in 2007

Quotable: "He's a pure contact hitter with tremendous plate coverage and power that borders on shocking considering his size. He's an above-average runner and a fundamentally sound defender who makes the play on every ball he gets to."
Kevin Goldstein, Baseball Prospectus, Dec. 2010

Scouting Report: "He's just 21 years old, and normally a player that age with these kinds of numbers would be all over prospect lists. But Altuve is a small guy, listed at 5-7, 170, in reality he's more like 5-5. He's a good athlete, with average speed but terrific instincts on the bases. Although he's not a walk machine, he makes contact, shows surprising power to all fields, and seems to have few weaknesses at the plate, laying off pitches he can't hit and punishing mistakes. He has plenty of bat speed and is not easy to overpower, contrary to the stereotype for smaller players."
John Sickels, minorleagueball.com, Jul. 2011 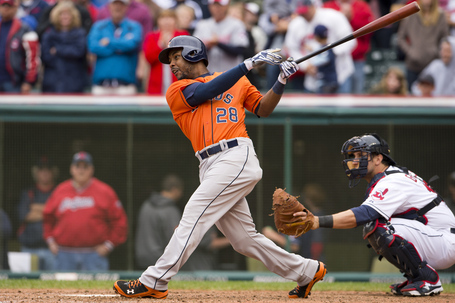 Acquired: 3rd Round pick of the Baltimore Orioles in 2008. Acquired by the Astros in trade for Bud Norris in 2013.

Scouting Report: "While the overall ceiling is lower, Hoes' hit tool may rank with Machado and Schoop. He shows easy command of the strikezone and the high level of comfort in the box that often belies a successful Major Leaguer….To the extent he is stuck in the corner, he will look to prove he has enough pop to keep Triple-A and Major League arms honest, and that his success at Bowie wasn't simply a product of his .354 BABIP. With minimal growth, you can squint and see a Gerardo Parra-esque profile."
Nick J. Faleris, camdendepot.blogspot.com (now with Baseball Prospectus) 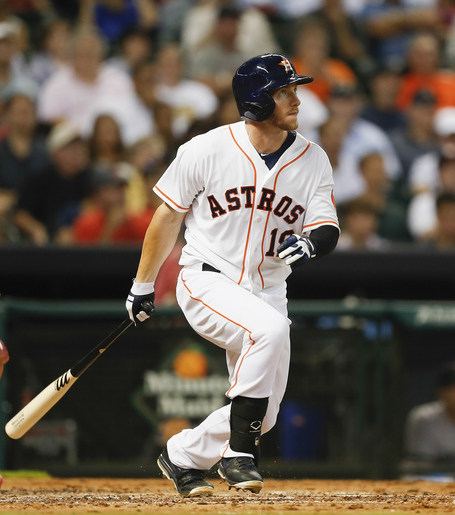 Acquired: Was considered a possible first-round pick but fell due to his commitment to the University of Texas. Ended up being drafted in the 6th Round by the Pirates in 2008. Signed over slot for $1M. Traded to the Astros for Wandy Rodriguez in 2012. Made major league debut in 2013.

Quotable: "His reluctance to fish outside the zone or to even take the bat off his shoulder in most cases, has forced pitchers to abandon the corner-nibbling and to simply just throw him strikes. That has pushed him into numerous hitter-friendly counts and, as a result, given him much better pitches to hit."

Howard Bender, Fangraphs, Aug. 2013 "A Walk is As Good as a Hit: The Robbie Grossman Story"

Scouting Report: "Grossman is technically a five-tool prospect, yet one without a plus tool. He showed a much simpler swing in 2011 and a better feel for contact. He has enough pop to earn average power grades. He's a 50-55 runner who can steal a base when given the opportunity, plays a good outfield, and has a solid arm. It's not a tool, but one of Grossman's most valuable attributes is his plate discipline; he led the minor leagues with 104 walks and rarely commits to a bad pitch."
Kevin Goldstein, Baseball Prospectus, Dec 2011. 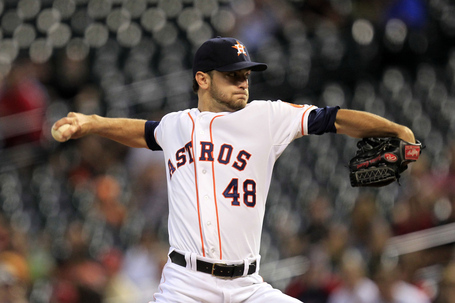 Acquired: Fell in the draft due to a strong commitment to Missouri. Drated in the 38th round of the 2008 draft by the Philadelphia Phillies. Acquired by Houston in 2011 in a trade for Hunter Pence.

Quotable: "Cosart's fastball is among the best in the minor leagues, as it combines mid-90s velocity with outstanding movement, he has the ability to work both sides of the lower half of the plate with it. He shows a decent power curveball that he has confidence in, and he's an aggressive pitcher who works quickly and gets ahead of the count."
Kevin Goldstein, Baseball Prospectus, Feb. 2011 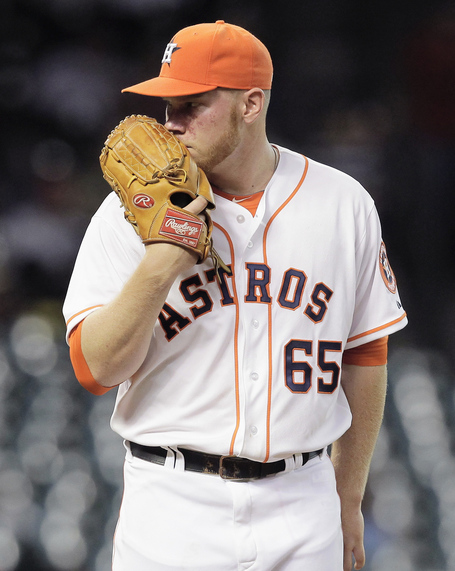 Acquired: Drafted by the Atlanta Braves in the 8th Round of the 2008 Draft

Quotable: "The left-hander doesn’t have a huge ceiling but but he could develop into a No. 3 or 4 starter capable of providing 200+ innings of work each season." Fangraphs, Mar. 2012 [Ed. Note: That’s not a good ceiling? Mark Buehrle begs to differ.]

Scouting Report: "He has the chance to have at least three above-average Major League pitches. His fastball is in the 87-92 mph range, he has a solid cutter and his changeup is an above-average offering as well. He mixes his stuff well, and it all plays up due to his outstanding command and control." MLB.com, 2011 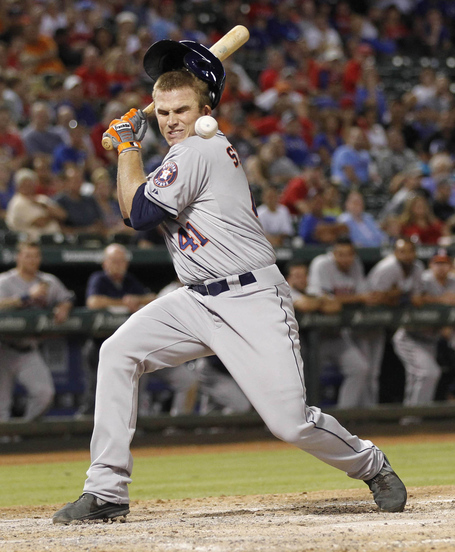 [I wish I had access to a better photo, perhaps one NOT of Stassi getting hit in the face. Alas, this is the only one in the SB Nation asset library that wasn't worse.]

Acquired: Was considered a first-round talent, and was paid like it. Stassi was drafted in the 4th round by the Oakland A’s and signed for $1.5M, the most money ever paid to a fourth-rounder. Traded to the Astros in February 2013 in return for Jed Lowrie.

Quotable: "A high school catcher might not be a typical A's pick, but Max Stassi isn't a typical high school kid. We felt he was a special kid both physically and maturity-wise, and I think everyone that went to see him play recognized that."
David Forst, Assistant GM of the Oakland A’s

Scouting Report: "A tough, throwback-style catcher, Astro prospect Max Stassi is one of the best defensive backstops in the minor leagues, with plus catch-and-throw skill and a work ethic that's helped him rise through the prospect ranks. … At the plate, that strength makes him look increasingly like an all-or-nothing slugger, striking out more than once per game but reaching the bleachers with increasing frequency. With a solid knack for game calling and the leadership style to hold a team together, he's got all the makings of a major league captain... and probably a manager someday after that, even if he can't ever really hit a good curve ball."
Scoutingbook.com, 2013 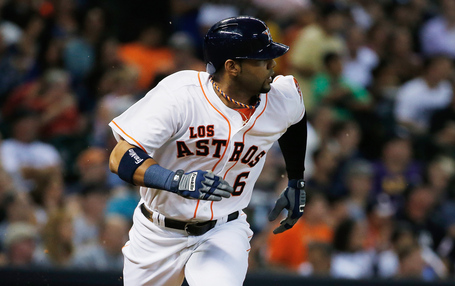 Acquired: Signed by the Phillies as an International Free Agent in 2008. Acquired by the Astros in the Roy Oswalt trade in 2010.

Quotable: "Has big wheels and some pop from a premium position. Could end up hitting .265 with 20-plus doubles and 30 steals."
Jason Parks, Baseball Prospectus, Nov 2012
Scouting Report: "He has every tool you look for in a major league shortstop: athleticism, range, speed, quick hands, arm strength. … Villar isn't going to be a huge power hitter, but he isn't punchless: he has wiry strength and should hit doubles and triples with the occasional home run."
John Sickels, minorleagueball.com, Jul. 2013

I created this post to remind readers that several of the Astros' current major league players are young enough that they still could be playing in the minor leagues. And not just in Triple- or Double-A. The average age of a player in the Cal and Florida State High-Single-A leagues is 23 years old. Five of the Astros on this list are of an age that, if they still played in A-level ball, they would still not be considered old for the level or "busted prospects."

Fans rightfully should be excited about the talent coming up in the system. But these current Astros are comparable players, all have high draft and prospect pedigrees, and are just beginning the upward climb on their career performance curves. 2013 was a dismal season, but each of the players on this list can be realistically projected to learn from their first exposure to major league baseball and continue positive growth in their craft.

Don't sleep on these guys. One of them could very easily become the next major Astros star.