A player may be more than a sum of his parts, but take one of these pieces out of the equation and things could go wrong for Houston in 2014.

Share All sharing options for: Spring Training 2014: Five Astros body parts that will shape the season

The 2014 season will answer key questions for the Astros. By October, the organization will have a clearer sense of which players will comprise its major-league core, a core, hopefully, that will enable the ‘Stros to annually contend for a World Series.

But as other teams know, it's challenging to develop a strong, young set of players, since big-league success depends on numerous variables. Often, a player's future rests on his ability to harness or maintain the parts of his body vital to his position (think, for example, of the tragic history of Grady Sizemore's legs). This notion applies not only to minor leaguers and rookies, but also to veterans striving to continue their production. With this idea as a guide, I'll analyze the crucial body parts of five Astros, including what they mean for the team's future.

For Houston, a healthy Jesse Crain could make the difference between an average bullpen and an above average bullpen. Before injuring his shoulder and right biceps in 2013, he posted numbers out of a video game:

Additionally, Crain could grab the attention of win-now teams at the trade deadline, giving Houston a chance to add even more prospects to its system. Perhaps justifiably, many Astros fans might be sick of the club's best relievers being traded for prospects (read: Mark Melancon, Wilton López, and Jose Veras). But unless the front office thinks it could extend Crain's one-year contract--or consider it prudent to do so--Jeff Luhnow & Co. would prefer to acquire youngsters before the righty hits the open market, where lesser relievers have earned $5 million per year. Besides, Houston's bullpen would have depth in Chad Qualls, Matt Albers, and various relievers entering their second seasons. 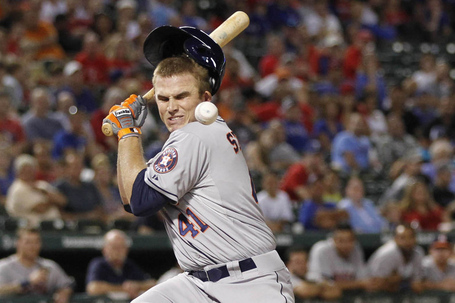 Max Stassi had a bittersweet season last year. The 22-year-old catcher hit 17 home runs over just 76 games at AA Corpus Christi, slugged .529, and earned a major-league call-up in August. Additionally, he built a reputation as probably the best defensive backstop in Houston's system. But in his second big-league game, Stassi suffered a concussion on a hit-by-pitch. He played only once more all year.

One assumes that Stassi has completely recovered, however, and that he will open nextseason at AAA Oklahoma City. With his power and defense, he would easily project as Houston's catcher of the future, if not for Jason Castro. The prospect hasn't caught a pitch in AAA, but he looks primed for more major-league appearances in 2014. If the front office doubts Castro's future as a backstop, or its chance of extending his contract, expect to see more of Stassi later this year or in 2015.

The 2013 season confirmed that Chris Carter is a three-true-outcomes hitter. In 311 of his 585 plate appearances, he either struck out, walked, or hit a home run. Among hitters with at least 585 plate appearances, Carter led MLB in both K% and strikeouts. But he still mashed 29 longballs, averaging a "true" distance of 402.2 feet per homer, as ESPN's Home Run Tracker shows nicely:

As the other stats demonstrate, though, the 27-year-old has serious contact issues, possibly connected to a trend in his hitting zones. Some Astros fans still have nightmares about Carter's whiffs against pitches low and away, and the numbers back their fears up. According to ESPN's Hot Zones, the right-hander hit only .172 on offerings low and away--and that's just on pitches in the strike-zone (click on the link to see his similar figures outside it). One wonders if Carter just struggles to visually judge the ball low and away, if his eyes deem it more hittable than it is. This notion may seem only qualitative, but another 585 at-bats of data should add weight to it.

One must also consider the slugger's vision when dissecting his struggles at Minute Maid Park, where he slashed .164/.277/.328 last season, compared to .279/.360/.656 on the road. Only 10 of his 29 homers came in Houston, a mystery given the seemingly perfect marriage of Carter's pull swing and the Crawford Boxes. Most sabermetricians would point to the righty's .233 home batting average on balls in play, but that doesn't fully explain why Carter hit 5.6% fewer line drives at Minute Maid Park and 6.8% fewer fly balls. It's possible that he was too mindful of the Crawford Boxes. Still, most hitters will attest to seeing the ball worse at certain ballparks, often due to their center-field backgrounds. If Carter posts another low BABIP at home this season, his struggles might be more than an anomaly.

Alternatively, in 2014 Carter could use his experience to balance his hitting zones and produce more consistently in Houston, not to mention benefit from the likely regression of his batted-ball numbers. If so, he would easily push 35 or 40 homers, and probably 100 RBIs. These numbers are usually found in a three-win player, whom Carter could become if he never plays the outfield. The Astros control him through 2018, so the potential value is be huge.

In 2013, Jonathan Villar committed 16 errors with the Astros, tied with Matt Dominguez for the club lead. But there was a key difference: Villar appeared in 813 fewer innings than Dominguez. An optimist might attribute the shortstop's mistakes to rookie jitters, though one could say the same of Dominguez. At any rate, the Astros look hesitant to simply hand him 1,400 innings this season, as the signings of Cesar Izturis and Gregorio Petit suggest.

Villar's hands have also caused trouble on offense, where he has struggled to handle the bat. Last season he struck out in 29.5% of his 241 major-league plate appearances. When swinging at pitches in the strike zone, Villar made contact 81.6% of the time, about six points below league average. In brief, the 22-year-old must hit the ball more often to fully use his speed. Some drills in hand-eye coordination would only help.

On the other hand, Villar would create a nice problem if he plays better defense and handles the bat. Carlos Correa is rising through the minors, so what would the Astros do with a reliable, cost-controlled shortstop in his way? Would Correa shift to third, as many scouts have predicted? Or would he still play shortstop and the team find a new position for Villar? In either case, Dominguez or Jose Altuve might become a trade chip, if not Villar himself. Maybe one of these three instead becomes a multi-positional player. (I haven't even mentioned Nolan Fontana or Rio Ruiz.) These issues are more for 2015, but the Astros might soon have an embarrassment of infield riches.

How long will Castro remain a catcher? How long will he remain an Astro? The 26-year-old's knees will ultimately answer these questions. Castro tore his ACL in 2011, experienced knee swelling in 2012, and had a cyst in 2013. Together, these injuries have cost him about a season and a half. Castro's history must factor into the extension Luhnow & Co. offer him, if they offer one at all. The backstop is currently set to be a free agent in 2016.

For these reasons, Castro must still prove that he can catch every day, if not most days. He caught in only 98 games last season, yet still produced 4.3 wins above replacement, fourth among catchers with at least 490 plate appearances. (The top three? Yadier Molina, Joe Mauer, and Buster Posey.) Castro provides far more value behind the plate than he would at first base or designated hitter. There's the option of moving him to left field, but the front office would have to consider how much of his offensive value would be erased by his defense. In short, the Astros should resist giving a Yadier-Molina-esque extension to a catcher who will soon switch positions.

Conversely, if in 2014 Castro demonstrates that his future lies behind the plate, the front office should sign him long-term. It's hard to find a young backstop who can mash while playing at least average defense, and recent contenders--e.g., the Cardinals, Giants, and Orioles--have shown how teams can build around such an asset. If Castro could even just split time with Stassi, Houston's catcher position should produce nicely for years to come.

(All stats are courtesy of fangraphs.com, unless noted otherwise.)