Astros offseason: A guide to the next month of monotony without baseball

After the Hall of Fame announcement, after most of the winter's biggest moves are made, what can you look forward to until actual baseball begins? Here's a start.

Share All sharing options for: Astros offseason: A guide to the next month of monotony without baseball

You're probably weak. You've probably been crying since Wednesday afternoon. Those two votes hurt, didn't they?

It's okay. Let it out. You'll get over it eventually.

When you do come to terms with Stephanie getting voting off Top Chef because Nick had immunity, you'll notice there's not a whole lot going on in the baseball world. There's a solid month now between certified stories and when baseball begins and we can start marveling at how players are in the best shape of their lives and how they're looking forward at redeeming themselves from a bad 2013.

Until then, what do you do?

Well, let's help with that. Here are a few different things you can focus on between now and then. When you get the winter blues because it's 60 degrees outside and you're freezing, think about these.

1) Jeff Luhnow is a ninja

Did you know that? It's easy to forget. To help you remember, Ryan created this piece of art that will haunt you every time you close your eyes. 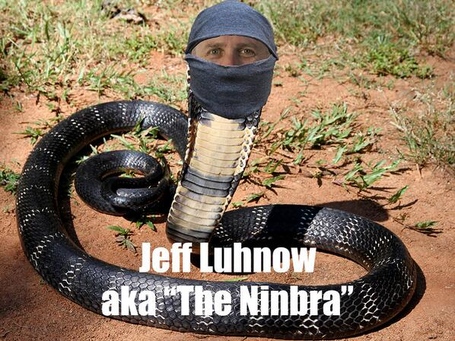 Luhnow is a ninja for a reason. He can strike without any warning. You won't know when he's about to make a move. There may not be moves to make right now, but that doesn't mean a trade won't fly out of nowhere. Remember the Jed Lowrie trade? That happened last February.

Be on constant vigil. That's the only way to avoid being caught off-guard by the Ninjeff.

Yeah, yeah, yeah. It's an old suggestion. But, I'd implore you to watch one outside your comfort zone. If you've already seen The Natural this winter, try something different like Pelotero or Sugar. Maybe watch something so bad it might be good like Summer Catch.

Even with all its faults, For Love of the Game has pretty good baseball scenes. It's a romance hiding as a baseball movie, but so is Bull Durham. Just deal with it and clear the mechanism.

Matt Garza is sitting out there. He seems like a good pitcher and a terrible human being. But, for the right price, maybe he'd look good in an Astros unif-

This is the time of year when ANY free agent starts to look good because they're a "splashy" move. Maybe Stephen Drew would be an upgrade, but the guys who can really help and are still on the market are few and far between. If they're legitimate, they most likely have draft pick compensation.

Ask yourself two questions before going down the free agent rabbit hole: would said player improve the 2015 Astros? Could Houston flip him for players at the deadline? If the answer to both is no, stay away.

Classic winter move. If you can't watch real baseball, read about it. There are a ton of good recommendations out there, books like Ball Four and the Bill James Historical Abstract. But, if you're looking for something with an Astros flavor, try these two.

The first is The Wizard of Waxahachie and is about Paul Richards. Here's the description from Amazon:

One of the most influential-and controversial-figures in baseball of the 1950s, '60s, and '70s, Paul Richards was a player, manager, and general manager, a participant in many of the historic changes that marked "the end of baseball as we knew it." Richards managed the Chicago White Sox and Baltimore Orioles-laying the foundation for the Orioles' championship clubs of the 1960s and 1970s-and built the expansion Houston team from scratch. Best known for inventing the giant mitt for knuckleball catchers, Richards was also the first manager to track on-base percentage and the first to monitor pitch counts. He constantly experimented with tactics and strategies, and he preached the need for constant practice of the game's fundamentals.

Drawing on Richards's writings and personal papers, plus previously undiscovered audio recordings, Warren Corbett chronicles the life and times of the baseball wizard who left an indelible mark on America's national pastime.

Another that Tim has recommended in the past is Jimmy Wynn's autobiography. Here's its description:

Despite the pressures of racism and a troubled young adult married life, a compact little guy named Jimmy "The Toy Cannon" Wynn achieved remarkable success as a major league power hitter. In his fifteen seasons in the major leagues, he hammered 291 home runs, three of which still rank as some of the longest balls on record. Following his trade from the Houston Astros after the 1973 season, Wynn's slugging and leadership presence on the field guided the Los Angeles Dodgers to the 1974 National League pennant. His last major league home run came as a member of the New York Yankees. It proved to be a dramatic first homer on Opening Day of the newly renovated Yankee Stadium in 1977, but this story is so much more than a statistical accounting of Jimmy Wynn's many accomplishments on the field. It is the story of a man who overcame some long odds to become one of the best little-man power hitters of all time. Jimmy's honest, forthright, and wise storytelling abilities allow him to take you along for the spiritual ride and, implicitly, how he came to be known and loved as "The Toy Cannon." In June 2005, the Houston Astros retired Jimmy Wynn's uniform # 24 for all time. The book is also visual. It features twenty-four photos of Jimmy Wynn's life, from childhood to his current career as a sports analyst for Fox Sports in Houston. Please join Jimmy for this special trip too. The train departs every time someone cares enough to pick up the book and make the journey with one of baseball's special people.

Then, after you read one of them, come on TCB and share about it with a FanPost. We might even put it on the front page.

Smart people have said it takes about 30 days to pick up a new habit. Since there's more than 30 days between now and when pitchers and catchers report, this is the perfect time to pick up a new hobby or habit.

Suggestions? Well, this list can't go that far. Whether its whistling, yo-yoing or compulsively commenting on TCB, you can do things to get into baseball shape yourself. Maybe you practice cheering for George Springer. Or practice turning off your TV in disgust after another close loss. Use your imagination.

But, there's never been a better time to pick up something new. There's so little going on in the baseball world right now, you won't miss much.

Don't worry, we'll still be here, plugging away, writing about whatever small story breaks. We've got your back.