Baseball Hall of Fame: Morris, not Maddux and MLB.com's ballots

As we wait on Wednesday's announcement, more ire is drawn after MLB.com released their 17 ballots.

Share All sharing options for: Baseball Hall of Fame: Morris, not Maddux and MLB.com's ballots

We are just about 24 hours away from the announcement of the 2014 Hall of Fame class. Controversy still surrounds the process, though. We have multiple stories that are of note to you Astros fans hoping to see Craig Biggio and Jeff Bagwell enshrined this summer.

More: HOF and why it doesn't matter Biggio and a story of suspicion Problems with the crowded ballot

First up, an update from the Gizmo, which now lists 146 ballots (26 percent). Biggio is still in, barely, at 80 percent and he'd join a class with Frank Thomas, Greg Maddux and Tom Glavine. Bagwell remains sixth in vote-getting here with 62.4 percent of the vote.

Noteworthy is this was updated at 10:30 a.m. today, before MLB.com released all 17 of its ballots from voters. You can check it out here, but here's former Chronicle columnist and all-around swell guy/troublemaker Richard Justice's ballot:

There are at least 16 deserving candidates on this ballot thanks to the backlog created by recent voting. At a time when there are more and better ways to analyze players, balloting seems to be getting dumber. Let's set Bonds and Clemens aside because the PED suspicions are legitimate causes for concern. That said, there are still six slam dunks on this ballot: Bagwell, Glavine, Maddux, Mussina, Schilling and Thomas. Raines and Biggio are easy calls because both impacted games in so many different ways. Morris was one of the best of his generation in the 1980s. Trammell is like Raines in that the deeper one gets into his numbers, the better he looks. Bagwell is one of the top five players on this ballot, but probably won't get in because writers have turned the voting into a guessing game about PEDs.

He doesn't tab Bonds or Clemens, but otherwise that's a mighty fine ballot. I'll forgive him Morris because he used all 10 spots and he voted for Schilling, Mussina, Trammell and Raines.

Morris has flaws -- a 3.90 ERA, for example. But he gets my vote for more than a decade of ace performance that included three 20-win seasons, Cy Young Award votes in seven seasons and Most Valuable Players votes in five. As for those who played during the period of PED use, I won't vote for any of them.

That's right. On this ridiculously stacked ballot, with potentially 14 Hall of Fame caliber players on it, Gurnick went with just one player. What's worse, he went with the guy who has the least legitimate qualifications on that ballot (apologies to Mike Timlin and all the rest who won't get 5 percent). What's even worse, he used as his justifications things like Pitching Wins and subjective voting.

What's worse than the worst stuff from the worse part above is that last line. It's the line that has drawn the internet's ire and roused Gurnick's defenders. It's so completely wrong-headed, I'll not go into the details. But, suffice it to say, trying to draw a hard and fast line in history is a lesson in short-sightedness.

Rob Neyer on the worst HOF ballot of all

Hey, there's always next year. It's never too late for enlightenment. Or at the very least, accuracy.

LSB's take on the Ballot Hear Round the World

Ken Gurnick of MLB.com left Greg Maddux off of his Hall of Fame ballot

As this article shows, the period of PED use has been around a lot longer than this. Even if we limit this to the "Bash Brothers" era when baseball's offensive numbers took off, Morris still played in the "period of PED use."

I've been thinking about voting for the Hall of Fame quite a bit. I've been trying to decide what I'm missing. Why can't I see this vote through the eyes of those who want to moralize and make abstract (and wrong) judgments based on no hard evidence and little circumstantial proof?

It's because I view voting differently than they do. That's the only thing I've come up with.

I believe people like Jeff Pearlman and Ken Gurnick who are so against anyone who might have used PEDs are that way because they view the Hall of Fame as an honor to bestow on someone. Like giving someone a title or a scholarship or something. It has to be earned and we don't like people to resort to sordid means to get there. It makes us feel bad about bestowing that honor, which should be withheld for the snowy white, dewy pure.

The defenders of Gurnick, like Ken Rosenthal, who said it's his vote, let him do what he wants with it, also view it as an honor. They just view the vote itself as an honor that was bestowed on them. It imparts great authority and responsiblity. Like Spider-Man, they try to wield this power with a conscience. If they want to make arbitrary decisions about arbitrary end points (most wins by a pitcher in the 80's), then they've earned it through 10 years of service to baseball.

I, too, view the vote as an honor, but I'm not so vain to think I absolutely know the right way to deal with it. I'm not jealous of those who have a vote; I want to join their club someday. To that end, I got into the BBWAA and will try to stay in long enough to gain a vote.

But, as I said the last time we talked about voting, Deadspin and all this, if the system is broken, I'd gladly give that potential vote up to make it work. The Hall of Fame should be about honoring the game's history. We shouldn't whitewash over that history, though. Barry Bonds was one of the scariest hitters of all time. He was so, so good. Was he clean? Not likely, no. Does that mean he shouldn't have a place in the Hall? He absolutely should be there. You can't write the history of that era without him.

Crushing the Case against Bagwell 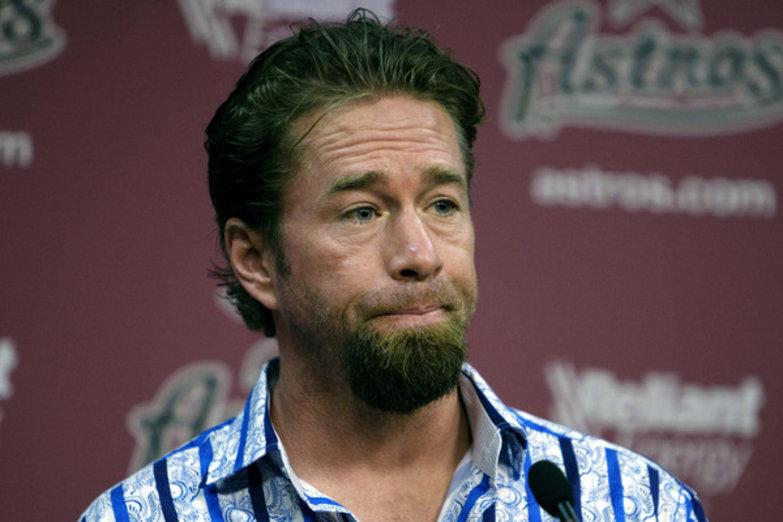 Chris takes a four-iron to the case against Bags.

That's ultimately why I can't come around to Gurnick's (or Chass' or anyone else who takes a hard-line, no-exceptions view of the Steroid Era) line of thinking. I don't think the Hall of Fame should be an honor to bestow on someone.

Argue with me all you want about Larry Walker's home/road splits or whether Edgar Martinez deserves to be in despite playing as a designated hitter. Argue the facts, not conjecture. That's how it should be.

That's why ballots like Gurnick's bother me. He's essentially saying his facts are that Morris was better than Greg Maddux, Tom Glavine and the rest of the players on the ballot. Which is why his ballot is laughable.

This is not the end of the outrage. That will continue for at least the next two days. It will continue until Jeff Bagwell, Craig Biggio and the rest of the best players from the last 15-20 years are voted in.