After three tough years for fans, the air at Minute Maid Park for 2014 FanFest was more exciting than in recent years. It could be a better informed fan, but was more likely a reflection of the collective calm and excitement clearly on display from the front office.

Share All sharing options for: Calm, Cool, But Excited: The Air of 2014 FanFest

FanFest wasn't always my favorite event. In fact, for years I passed on the stadium festival for Houston baseball fans. I'm not one to pay for autographs and I had no desire to humiliate myself by taking batting practice on the field. My single season on a championship t-ball team does not qualify me to ever hit a baseball again in my life.

But the last few years I've made the event a priority as the Houston Astros have invited bloggers to FanFest to specifically take part in Q&As with front office personnel and, in some years, a handful of players as well. 2014 was no exception, so I was there. You may have already read Bob's take or perhaps the full interview notes that Idrees offered up earlier this week.

I won't rehash the interviews themselves, but I think it's important for fans to understand how different FanFest felt this year. Yes, kids, I'm talking about feelings. Don't be scared. This won't hurt a bit.

Despite the cold temperatures that day, there was a warmth in the ballpark, an excitement building that we haven't seen at FanFest in recent years.

Last year, with a whole new regime in place, I wasn't sure what to expect, but the air around the blogger interviews was thick and intense. Bo Porter was new to us. He'd only been in place a short time and no one had really had a lot of time with him. He was an unknown entity to Houston. He was new to the role of Skipper and he was a little bit scary. Yes, I said scary.

Bo was particularly intense during last year's FanFest. He was focused and serious and wanted to make sure we all "got" him and his style and what he would expect from this very young crew of players. He wasn't going to let anyone slack.

Fast forward to 2014 and the Bo Porter that stood in front of me (hugging me on the way in) was a very different guy in many ways. We had some familiarity with how he does things and what his thinking is around baseball now. We have a whole season of post-game and pre-game interviews, not to mention the many faces of Bo during a game. We know he has high expectations for players and himself.

So as he sat on a table in a Club level bar at Minute Maid Park on Saturday, he just seemed more relaxed. Don't get me wrong, Bo is still a very intense guy who is focused on getting the job done, but the air of how he comes across is more relaxed, more confident, more Bo and definitely less scary.

I think the most telling thing he said to us on Saturday was in reply to the question, "Now that you've been the Manager for a year, what's the biggest lesson you learned that you'll take with you into Spring Training?" Bo's answer? "I know the players."

The answer was telling in a lot of ways. Of course, last year he didn't know the limits of this team. He didn't know how an individual player would respond when left in a game and failing. Would that player stay mentally engaged? Would he fall apart? Bo had to leave a struggling pitcher on the mound just to get his answer. This year? He knows their limits and when to pull someone out. He knows if a player really needs a rest day. He's better equipped to make the tough calls on the field.All-in-all, the air around Bo Porter at FanFest wasn't scary - it was confident.

If Bo Porter was confident, then I'm not sure what the best way to describe Jeff Luhnow would be. Playful, perhaps? If you've met Jeff,even for a minute, you know that he's a very affable guy. But Jeff was quite relaxed as well. It's as if they were pumping something into the air at MMP that day.

In retrospect, it makes sense that Luhnow would come across as easy-going and comfortable, after all, I would argue that his toughest work is done. No, I don't mean rebuilding the farm system. Yes, that was a difficult task that he accomplish with finesse and in short order, but his hardest job the past two years? Explaining it all to the fans. 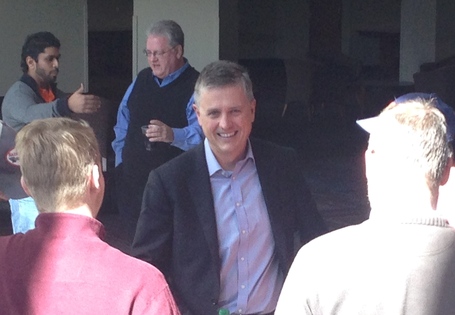 In a game where the vast majority of fans can name fewer than three minor league prospects, the Houston Astros, and Jeff Luhnow in particular, had a very large project in 2012 and 2013 - make the fans understand why the organization couldn't invest much in the major league team. Explaining to fans why you sort of need the team to not be very good so that you could focus resources on those prospects that the fans have never heard of (and may not ever see on a major league field) is a very hard sell.

But the Astros front office was up to the challenge and I'm pretty sure that Luhnow & Co. spent every on-camera moment plus every print and radio interview conveying their message. And based on the level of excitement, the lines for autographs from new and young players, and the number of people at FanFest, I'd say that Jeff's message got through.

Reid Ryan, who I had no 2013 comparison to make, was full of excitement and new ideas for 2014. The fact that a potential regular season Corpus Christi Hooks game could be played at Minute Maid Park showed me that he's on the same page as Luhnow. Getting fans comfortable with the future so they understand the continuing investment int he farm is the smart thing - and a lot of fun.

Ryan was definitely thinking more about the fan - not just saying he was - and it shows in the ideas and initiatives coming down the road. More fan engagement during games, moving the Community Partners sign, opening the roof after the 6th inning on nicer days/nights. Every idea he mentioned was fan-centric and his level of care was evident.

After the time spent with Porter, Luhnow and Ryan, I spent some time walking around getting a sense of the fan's attitude. Minute Maid Park seemed fuller than in past years. I don't know what the official numbers were, but when the main concourse feels a bit crowded at MMP, it makes me smile. People are ready for baseball. 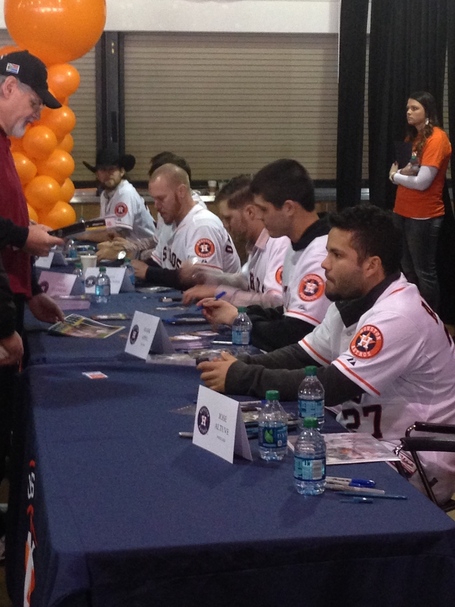 There were long lines for autographs and filled seats for Fan Forums. People were asking smart questions and taking it all in. Despite the cold temperatures that day, there was a warmth in the ballpark, an excitement building that we haven't seen at FanFest in recent years.

So whether they were taking batting practice, or throwing in the bullpen or jumping in a bounce house or chatting with the GM, the fans in Houston came out to support the team and definitely reflected the attitude of the guys in the front office - calm, cool, but excited.