Gaining back the public's trust is much harder than it was to lose for the Astros.

How do you gain back the public's trust?

Public goodwill is such a fickle thing. Look at any politician, ever. Name the most beloved of all time and it pretty much begins and ends with George Washington. Do you know why? He wasn't really a politician. He was just a leader (and a fascinating individual, but that's another story).

With businesses, trust is about the product they produce, but it's also about the brand. Brands have power and sometimes, regaining lost trust is as easy as changing a name. Well, I'll let Stringer Bell explain:

Sports teams are different still. They're like a cross between a business and a politician. Like a business, people understand a sports team is there to make money. That's why they still pay high ticket prices, keep paying escalating TV fees and more. Like a politician, though, there's a public trust with a team. The public feels they own part of it.

In a way, some of them do. Most teams play in publicly-funded stadiums, so shouldn't the tax payers get a say in how the team operates? Wait, that's a debate for another day and probably another website. At least another writer who didn't just link to a TV show to make his economics point.

Let's just assume the public has a personal investment in a team. If the team underperforms, it will lose market share. If a team hits a prolonged skid, that share could drop very low indeed. If a team loses 100 games for three straight seasons, it may be looking at a fan base full of internet writers, Twitter comedians and prospect geeks.

Those are all sports mistakes, though. People tolerate those. Look at the city of Cleveland, which was jokingly called the Factory of Sadness and then the name got adopted by a scarred and win-starved fan base.

What's hard to come back from is breaching public trust. Moving a team, changing a beloved team name, getting rid of the stadium name for some corporate sponsor all can affect a team no matter how they perform on the field. On the other hand, good teams get more leeway on the business side. If they're successful, like the Yankees, they can be jerks to fans, simply because winning will always breed more fans.

Basically, a team can be bad on the field or in business matters, but it can't be both.

Enter your Houston Astros under Jim Crane. Sort of. 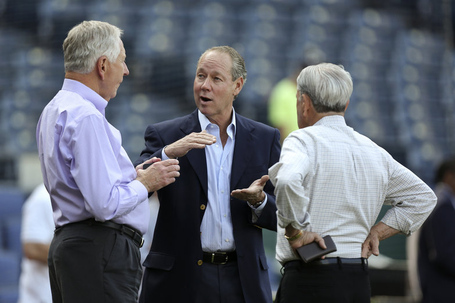 The Astros lost a ton of public trust for a number of reasons. First, owner Drayton McLane, for all his eccentricities, put forth a brave face and tried to make the club a winner. He tried (and failed) to invest in an opportunity post-World Series and fell short. Sure, it reversed years of fan resentment of McLane, but as we said before, winning cures most ailments.

Crane was not McLane, which left him in a slight hole. That pit got deeper when he also had to move the team to the American League, a place of ill-repute where they kick babies and torture poor fowl to make foie gras. Add in another 100 losses and fan trust was already at an all-time low.

Things have only gone downhill from there. Where to begin? We've chronicled the Astros business travails before. None of them are disasters by themselves, but taken together, they paint a rough picture for fans following the team. Untimely leaks plagued a big uniform redesign reveal. Beloved team personalities were shown the door or forced to leave, including broadcaster Jim DeShaies and social media maven Alyson Footer.

The lack of a TV deal kept Houston off of the airwaves for much of 2013, which only made the pit deeper for the Houston franchise. When reports leaked that the Astros could have accepted carriage deals, but turned them down, any lingering goodwill from casual fans (and Rockets fans) died.

All that leads us to the Community Partners billboards in left field.

By themselves, the billboards shouldn't be that big a deal. It's a great concept, trying to bring Houston businesses in to invest in the city's baseball programs and other charitable endeavors. The billboards themselves also aren't hideous. They have nothing on that whirling monstrosity out in Miami.

But, by placing them in left field, obscuring the train tracks, the fireworks and the beautiful night skyline, these billboards became a lightning rod for all that was wrong with Houston's non-baseball operation. They were a punch line. They were an eyesore. They were marring an otherwise still lovely park.

Taking them down fixes a problem, but it doesn't really gain back public trust. That's why what Reid Ryan has done in his short time as president of the Astros so encouraging. 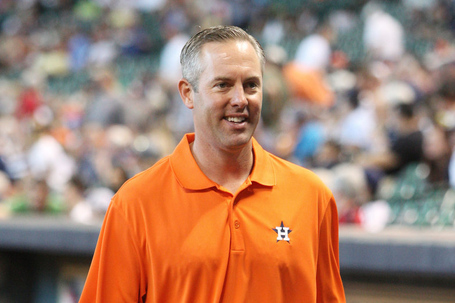 Let's go back (real quickly) to when Ryan was hired. George Postolos left the club with no deal for CSN Houston and hints of a fractious relationship with those inside and out of the organization. The business side had been a disaster, both in making money and in engaging fans. So, Jim Crane and his team brought in the son of a Houston icon, who's also a pretty smart businessman himself.

Reid Ryan is not a legacy hire. The job he's done thus far is proof of that. In less than a year, he's slowly fixing all the problems Houston accumulated since Crane bought the team. He can't fix them all and he can't regain trust overnight, but he's doing a darned good job of it.

First, he's being very open. He goes podcasts all the time. He talks with fans on social media and he reaches out to them at games. Second, he delivers on what they tell him. Start with the roof being open more. Go to the billboards coming down. Move on to his desire to get the Astros on TV sooner rather than later.

Again, none of his moves have been huge. They're baby steps, but they're moving in the right way. I'm sure there are those who will still not be convinced and I don't blame them. But, if Ryan continues the work he's begun this year, that trust will be earned back soon.

Of course, a winning season or two will also help.