A few final thoughts before the HOF news cycle goes away for a year.

Share All sharing options for: Baseball Hall of Fame: A little more on Jeff Bagwell's power

Being out of pocket for something like the last four days has been both a good and a bad thing. While the reasons for it left me yearning to get back to work so I can enjoy a break, it left me with little time to react to some marvelous things written around the internet.

For instance, there's Amazin' Avenue using the old scouting reports over at the Baseball Hall of Fame's excellent scouting corner of their website. You can search for a player's last name and pull all sorts of reports from the past. This is especially useful when someone like Dan Lewis wants to take a hammer to the dumb concept of Piazza's power coming out of nowhere.

It's a well done takedown of everything that's wrong with this Hall of Fame suspicion. You've got appeals to authority from players ("Oh, I totally saw him play in the minors as a 165-pound weakling. He must have used to get all that power."), from scouts ("I could tell exactly when his shipment ran out") and from writers who didn't report on it at the time, even if they "knew" about it (a.k.a. the Pearlman Corrollary).

Which argument to take first? The first one has been debunked, both by that AA story above and then by Astros County's excellent takedown of the notion that Jeff Bagwell got "power from nowhere." AC used scouting reports too, but he stopped too short. Compare Bagwell's report which AC linked to (where he was given a future 60 power grade and a 70 (!!!) hit grade) to this one on Frank Thomas: 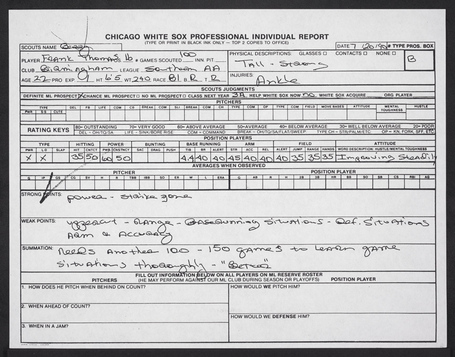 Granted, that's from the minor leagues and not when Frankie was at Auburn. Back then, Mike Rizzo gave him successive 80 grades for power, then asked him if they could get an apartment together. But, when thinks calmed down a little bit and Thomas got into the minors, his power grades looked suspiciously close to Bagwell's.

That's not surprising considering how closely intertwined their careers were. It also shows that people who rely on appeals to authority for their cases aren't doing it right.

But, you say, your second argument to debunk up there is the eye of the scout. How can you use scouts to debunk one then turn around and debunk them? Well, I'll tell you.

It's really all about this scout that Pearlman talked to for an article. In it, scout Brian Johnson claims he could tell exactly when Jhonny Peralta's steroids supply ran out, because he immediately looked a step slower than he did the day before.

Let that sink in.

I'm no expert in physiology. That's why we have Brooks around. But, my limited understanding of steroids is it takes much longer for them to take effect and they don't just wear off. Of course, that 60 Minutes report with Tony Bosch last night seems to refute that. Maybe the new drugs out there can have such an immediate effect.

But, in lieu of more astute knowledge on how the actual cheaters do their business, I doubt anyone could tell immediately after a player's drugs wear off. The human body just doesn't work that way. A person won't go from a step faster to a step slower in a day. It's a gradual thing.

Which is to say Johnson is falling into the same trap that those former ballplayers did with Piazza. They're distorting the facts to fit the narrative. Maybe there's some jealousy over another player's success. Maybe they're just making assumptions. In any case, it's bad form to rely on this sort of thing for confirmation of baseless suspicion.

Unless a player says he actually saw a guy using, don't believe it. It's that simple.

As for that third argument, it may be the easiest to debunk. If Pearlman believes Houston's clubhouse was a hotbed of steroid use because of the beat writers at the time, why didn't they report on it before? Don't give me the tired line of "they were scared of MLB." That's a cop-out. Richard Justice was around then and he hasn't said anything. Justice, for good or for ill, was a fantastic beat writers in Baltimore and knows his stuff.

Of course, there were always Fred Faour's statements that the Chronicle had a long-term investigation into it shut off due to no backing for corporate. That may be the case. I'd love to see someone now revive that info, especially in this climate.

For now, though, the absence of evidence is no evidence at all. Off-the-record suspicions from reporters who never actually reported on it is worse than relying on minor league opponents.

One last though, on a different topic. In the midst of Jonah Keri's piece on the Hall of Fame and Biggio's snub, he drops this gem:

That means there's a very good chance they might've seen more than 10 worthy candidates in the 2014 class. Biggio wasn't in Maddux's class as a player. Depending on your metric of choice, you might argue that he trails Thomas and Glavine in career value, too. He certainly didn't benefit from the same team-based halo effect that propped up Glavine's vote count. But Biggio, like Glavine, hit a big Hall milestone (in his case, 3,000 hits), and he'd warrant induction even without that round number.

We talked about this on the Afterburners podcast, that when throughout his career, I was afraid Biggio wouldn't get into the Hall because he wasn't flashy enough. I assumed Bagwell would because of the MVP award and the big numbers, but his late-career injury also was worrisome.

By any measure, Bagwell was the more impactful player than Biggio. He was clearly the better of the two on those teams, the one guy who scared teams when he came up to bat. He played a less-premium position, but had a much, much more effective bat.

When Biggio got 3,000 hits, I assumed as many of you did that he'd get his Hall ticket punched automatically. Everyone else did, after all. The slowness now has been puzzling. What's going on?

Well, maybe the general Hall electorate has switched. We assume that the entire Hall-voting membership are guys and gals like Murray Chass. Older writers who are stuck in the '60's and '70's. But, are we discounting the younger majority who embrace things like WAR and Jay Jaffe's JAWS system? Maybe Biggio's snub this year was equal part aneurysm-inducing stupidity and a smarter electorate.

Who knows what kind of rationale left all those voters to drop Biggio, even as 50 percent of the nearly 600 votes used all 10 spots available? That arbitrary 10-person vote limit likely gets changed. That will be the true test to see how many voters embrace Biggio as a Hall-worthy candidate, just not worthy of a top 10 spot.