Today's baseball analysts pay rather close attention to flyball, line drive, and groundball rates of hitters and pitchers in order to gain a deeper understanding of the player's seasonal and/or projected performance. Just looking a player's rate of a general batted ball type can reveal something about their relative ability to avoid/create that variety of event, but doing so is a bit of a simplification in so much as the most typical consequences of those batted ball events can change rather dramatically based on the direction of the field to which they are hit and individual players often display characteristic directional biases on certain batted ball types.

The objective here is to filter out batted ball events that occurred in American League parks and categorize them based on the general type of batted ball event, the directional zone of the field to which the ball was hit, and the plate appearance outcome.

The batted ball event data from every 2013 game played in an American League (AL) park through July 31 was downloaded from the MLBAM Gameday web archives and organized into spreadsheets. The text from the description fields of each play were searched to classify each batted ball event as either a groundball (GB), line drive (LD), outfield fly ball (OFFB), or infield fly ball (IFFB) and for each event the two coordinates of the field where the ball was fielded (or landed beyond the fence) was also recorded. The two foul lines of an MLB stadium form a 90-degree angle and as such one can resolve the fair portion of the playing field down to three 30-degree pie slices and for the sake of this analysis the leftmost one will be the Left-third of the field, the middle sector will be the Center-third of the field, and the right-most one will be the Right-third of the field. Using those coordinates each fair batted ball can be placed into one of the thirds, and for the sake of what follows all bunts and foul popups/flyouts have been excluded so the presented data will only include fair nonbunted balls. Each batter's batting handedness was further used to classify the Left- and Right-third of the field as their Pull-third and Oppo-third, or vice versa. The result of each play was also identified: single, double, triple, home run, or out (inclusive of reached base on error, reached base on fielder's choice attempt, and sacrifice fly events).

To keep the computations and analyses straightforward, only batting average (AVG = hits divided by plate appearances, in this study) and slugging percentage (SLG = total bases divided by plate appearances, in this study) will be reported for each permutation of batted ball event and field-third direction. This data was broken down further to compare lefthanded batters (LHB) to righthanded batters (RHB) across all American League parks and within the confines of MinuteMaid Park. 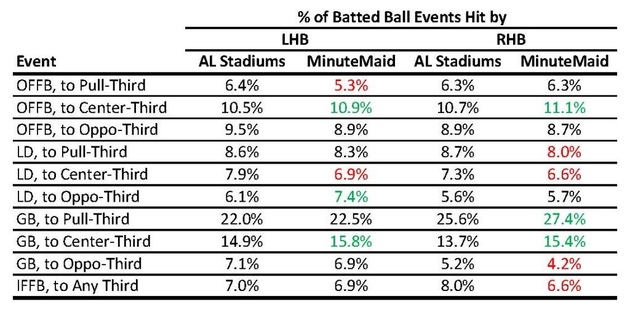 The most common batted ball event by a comfortable margin is the Pull-third GB (LHB: 22%, RHB: 26%) with the adjacently-situated Center-third GB next (LHB: 15%, RHB: 14%). The big difference between LHB and RHB is that RHB more frequently pull their grounders; RHB hit 5 to the Pull-third for every 1 to the Oppo-third, whereas LHB hit 3 to the Pull-third for every 1 to the Oppo-third. RHB in MinuteMaid Park seem to especially favor pulling their grounders, perhaps in an ill-fated quest to visit the enticingly-close Crawford Boxes on a pitch that is difficult to pull in the air; whether this is a home/road/combined-team effect seems worthy of future examination.

All AL Parks, Batting Average of LHB vs RHB by Batted Ball Type and Direction

Once the data is pooled across all parks, the LHB and RHB numbers end up being very similar with the exceptions of LHB hitting for slightly lower average on groundballs to the Pull-third and Center-third, a result which likely stems from the more aggressive shifting of infield defenders to the right versus LHB (if not also a smidgen of shortening of the throw to first). 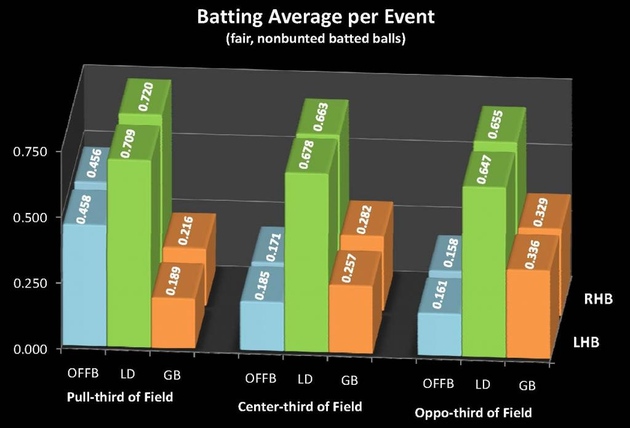 All AL Parks, Slugging Percentage of LHB vs RHB by Batted Ball Type and Direction 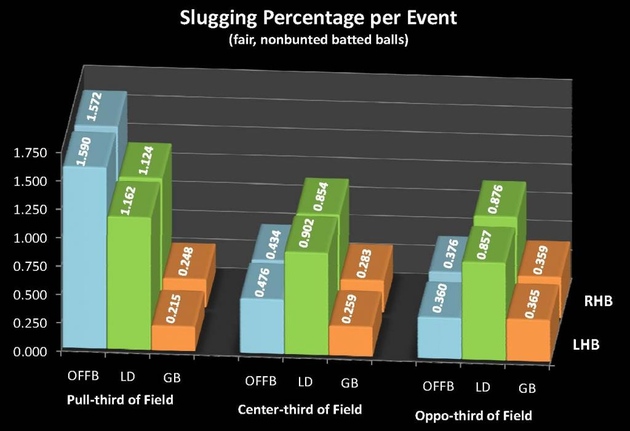 At the individual park level unique characteristics of home team batters, pitchers, and fielders assume increased influence on the results as a group of those players participate in every game played in the park. There are a few mathematical tricks that can be used to neutralize the contributions of the home team's players to the results but for now I will simply report the data as is. 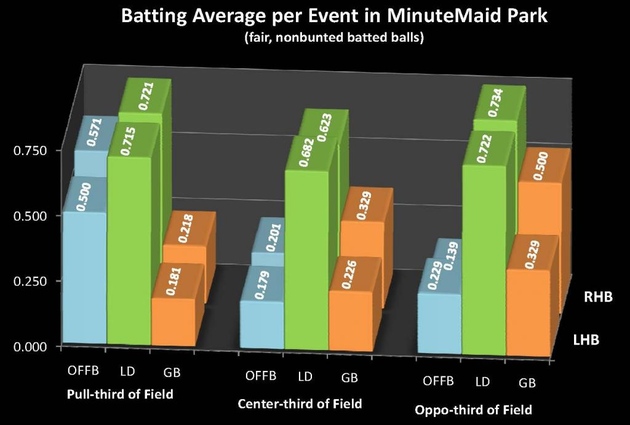 Looking at OFFB, RHB are not surprisingly out-hitting LHB on Pull-third OFFB given the close proximity of the Crawford Boxes and the tall fence in front of them; that 0.571 AVG is the 2nd highest of all 15 AL parks for the Pull-third OFFB with the other close-and-tall-LF-fenced stadium, Boston's Fenway Park, ranking 1st at 0.672 (the AL norm is 0.456, by comparison). The 0.229 mark by LHB on Oppo-third OFFB is also 2nd-highest in the AL so again the Crawford Boxes are boosting numbers in that direction (Fenway ranks 1st again by a large margin at 0.383). The LHB Pull-third OFFB 0.500 AVG ranks 6th among AL parks.

In terms of LD, while there was a gradual drop in AVG in AL parks in moving from the Pull-third across to the Oppo-third, in MinuteMaid Park LD are yielding similar results in the two corner zones; the LHB Oppo-third result is fairly easy to explain but not so much the RHB Oppo-third result.

Turning attention to GB, the peculiar result is what happens when RHB hit the Oppo-third GB; a whopping 35 of the relatively scarce 70 such events have produced a hit with the corresponding 0.500 AVG ranking 1st among AL parks and dwarfing the 0.329 AL norm for the event. Breaking that rather small sample down further shows that most of the hits have occurred with the Astros on defense (.537 AVG) though the offense's AVG is also elevated (0.448). The RHB Center-third GB 0.329 AVG (84 hits in 255 events) ranks 3rd highest among AL parks and well above the league 0.283 AVG norm, but in this case the hits occur at a nearly identical rate when the Astros are on defense and offense. 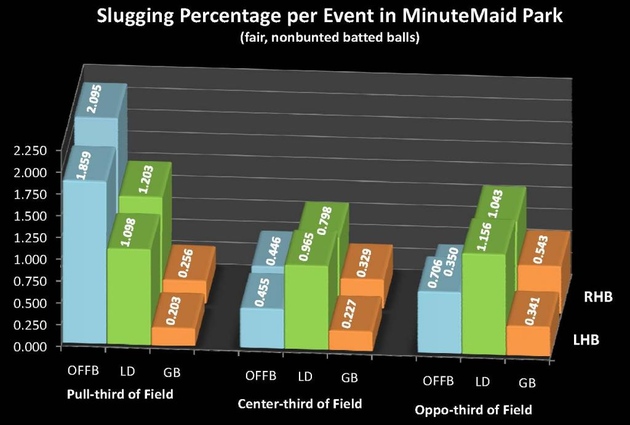 MinuteMaid and Fenway flip places on the Left-third OFFB slugging stats leaderboard, as MinuteMaid claims the top spot for RHB Pull-third OFFB and LHB Oppo-third OFFB (theory: the switch with Fenway is due to fence height). That 2.095 slugging percentage on RHB Pull-third OFFB is well over the AL norm of 1.568 and re-emphasizes why you want the Astros RHB hitting flyballs to left there and relatedly do not want Astros pitchers surrendering the same event to RHB; stated differently, the equivalent outcome to a RHB flyball to left field in MinuteMaid is 2.095 total bases or essentially a double plus an 8.5-foot lead off second. The LHB Pull-third OFFB 1.859 mark is 3rd-highest in the AL and also points out that pulling OFFB is also a rather good thing for LHB in MinuteMaid (bad thing for pitchers).

In constructing the ideal hitter to deploy against a relatively standard MLB defensive alignment, you would engineer him to:

In constructing the ideal pitcher to deploy against MLB hitters, you would engineer him to throw pitches which when contacted by the batter generate mostly:

If MinuteMaid Park were the home stadium, then you would drill into the player:

So which of these follow-up analyses would you prefer to see first?