Make it six Houston Astros affiliates in the playoffs, as Tri-City wins to clinch the Stedler Division on their final day. Meanwhile, Greeneville gets down to their last out before rattling off a convincing win to advance to the Appalachian League finals.

In case you hadn't heard, it's playoff time in minor league baseball, and with Tri-City's win against Brooklyn, six Astros affiliates have clinched spots in their leagues' respective playoffs. To keep up with all the action, here are the first-round schedules for all six teams:

Yes, that's right. In case you didn't pick up on that ever-so-subtle clue, the Greeneville Astros won yesterday to advance to the Appalachian League finals against Pulaski.

See, What Happened Was...

Joseph L. Bruno Stadium - "The Joe" - was jumping as a crowd of 3,014 gathered on a humid Tuesday evening to watch the ValleyCats clinch the playoffs with a 6-3 win over the Brooklyn Cyclones (NYM).

The ValleyCats had two routes into the playoffs with a magic number of one. They could either beat the Cyclones, or the Aberdeen Ironbirds (BAL) could have beaten the Lowell Spinners (BOS). As it turned out, both happened. The Tri-City faithful cheered Aberdeen on to an 8-7 victory from afar, and now the two teams set sights on one another, as first-round playoff opponents.

The ValleyCats offense started strong. James Ramsay doubled to open the bottom of the first inning, advanced to third on a Ryan Dineen single, and scored when Tyler White laced a base hit into left field. An error by Brooklyn second baseman Ismael Tijerina allowed Dineen to also come around to score, giving start Evan Grills a two-run cushion heading into the second inning - which was promptly erased in the top of the next frame.

After retiring Jared King on a pop-up to second base, Grills allowed three straight singles to James Roche, Matt Oberste, and Edward Rohan, whose single scored Roche. Oberste came around to score on a fielder's choice, but Grills was able to induce a grounder from getting Anthony Chavez, which Chan Moon fielded cleanly to start a double play.

Jake Rodriguez walked to lead off the bottom of the second, coming around to score on a wild pitch later in the inning to give the ValleyCats a 3-2 lead.

Kevin Comer came on to relieve Grills in the seventh, but gave up a home run to Oberste, followed by a hit batsman, a walk, and a single. Tyler Brunnemann came out of the bullpen to end the threat with a Gavin Checchini flyout. In the eighth, though, Brooklyn challenged again. After a leadoff flyout, Brunnemann allowed a single and a walk. Gonzalo Sanudo came on to close out the game with a three-run lead and five outs to go - which he got on the first five batters he faced.

After losing game one, the Astros had staved off elimination with a power surge in game two. But in the deciding game three, the Kingsport Mets had the Astros' backs against the wall. They'd cruised for much of the game, scoring runs on a wild pitch by Frederick Tiburcio and, later, on a throwing error on a rundown after a successful third-out pickoff play.

Greeneville's Chase McDonald led the seventh off with a double, advancing to third on a Brian Holberton flyout. Angel Ibanez came on to pinch hit for Darwin Rivera, proving that the fittest really are the ones to survive, and Rivera - while, a very nice young man - had a 70 wRC+ in his fourth season of rookie ball this year. Ibanez came through, knocking a single into left field to score the Astros' first run.

Ariel Ovando followed that by drawing a walk, and Thomas Lindauer was hit by a pitch to load the bases for Brett Phillips. Phillips stood in and worked a walk to score Ibanez and even the game up, 2-2.

The Mets' Yeixon Ruiz was the story of the eighth inning. After drawing a leadoff walk, he advanced all the way to third when a failed pickoff attempt bounced into the bullpen down the first base line. With the go-ahead run on third and no outs, Jeff McNeil lifted the next pitch into center field, where Brett Phillips made the play and fired home to try and make a play on Ruiz, who had tagged up. Phillips' throw was online to Brian Holberton, and Ruiz came in hard. When the dust settled and the bodies were untangled, the ball had rolled away and Ruiz had put the Mets up, 3-2.

Due up in the ninth were Angel Ibanez, Ariel Ovando, and Thomas Lindauer. Not exactly Combs-Ruth-Gehrig, but they'd done the majority of the work in the seventh, and would need to come through again if the team had any chance of advancing.

After Ibanez opened the inning with a weak groundout to first base, Ovando redeemed himself after a long, disappointing season by dropping a double down the left field line. Ovando was replaced on the basepaths by Marc Wik, but Lindauer went down swinging, and there were the Astros. Wik stood on second base, the tying run, with two outs in the inning as Brett Phillips walked to the plate.

Phillips fell behind 0-2 on the first two pitches. But this team has some magic in it. Down to the final out of the season, Phillips knocked a grounder down the left field line, past third base. It stayed just fair and he legged out a double, scoring Wik and tying the game.

Robert Coles came on for the Mets to get the final out and set Kingsport up for a walkoff win. Coles did get that out, but not until after four more runs had come across the plate in the inning. After intentionally walking Tanner Mathis to get a forceout at any bag, Coles gave up back-to-back singles to Juan Santana and Edwin Gomez, followed by a Chase McDonald double. Brian Holberton grounded out to finally end the inning, but the Astros entered the ninth with a comfortable 7-3 lead; a lead which they would not relinquish. Raul Rivera got the side out in order to preserve the victory and send Greeneville to the Appalachian League finals.

And Now For Something Completely Different...

After Brooks included some movie trivia in yesterday's recap, I turned to The Crawfish Boxes' very own graphics guru, Ryan Dunsmore, to create a very special valentine... because love is a very special thing, and it should never be taken for granted. 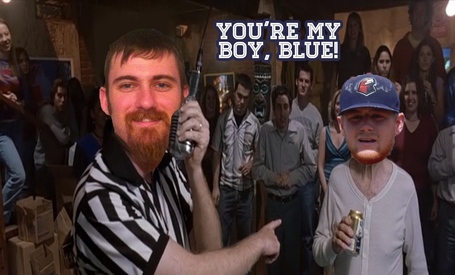