Note: Check your podcast subscription one of the podcast may need to be manually download. iTunes has a tendency to only download one podcast when multiple podcasts are released at the same time.

TCBP AB 96: To Profit or Not To Profit

In this episode David Coleman, Sean Feist, Ryan Dunsmore and myself discuss

So prior to the podcast Jose Altuve was hitting for a .270 batting average, a .306 on-base percentage and a .346 slugging percentage. Sunday the same day we recorded Altuve was 3-4. Monday afternoon he had another good game going 4-5. I'm hesitant to say he's back but it's a good start and something he can hopefully build on.

Forbes and the Astros Profitability Saga

This was a question I wanted to save for David: What should we expect from Austin Wates going forward and do you take him over Jimmy Paredes? I'm partial to Austin Wates because I've never seen much in Jimmy Paredes. He certainly has the tools to be a big time talent but he just doesn't seem to have the box to put it all together. Wates isn't in a much better position though as he could get lost in the shuffle of Preston Tucker, Andrew Aplin, Domingo Santana and of course George Springer. Still I hope he gets a shot at the big league level.

In this episode Brooks Parker, Ryan Dunsmore and myself discuss:

None of the three prospects busted for PED amphetamines were big time prospects but a couple were at least interesting. First basemen Michael Martinez, shortstop Jose Fernandez and D'Andre Toney were all handed 50 game suspensions for testing positive for PEDs. Michael Martinez is a 23-year-old first basemen playing in the lower level of the minors so he's considered organizational depth at this point. Both Fernandez and Toney, on the other hand, are young enough and interesting enough that their suspensions are an unfortunate affair.

All three have struggled to post consistent numbers this year, which may explain why they were trying to gain an edge on the competition. For a guy like Martinez, in his eyes, it was probably worth a shot; For guys like Fernandez and Toney it means they've lost so developmental time, but also was probably worth a shot for them as well; For guys behind them on the depth chart it's an opportunity to play.

The Astros have five affiliates (possibly six with Tri-City) and Brooks, being the minor league expert, breaks down each teams chances in the playoffs and discusses some of the more interesting series to keep an eye on.

Another round of the promotion game with Reymind Guduan, Brett Clements, J.D. Osborne, Joseph Musgrove and Luis Reynoso. If you're not familiar with any of those names you're not alone.

Bonus Podcast Art for the AMP: 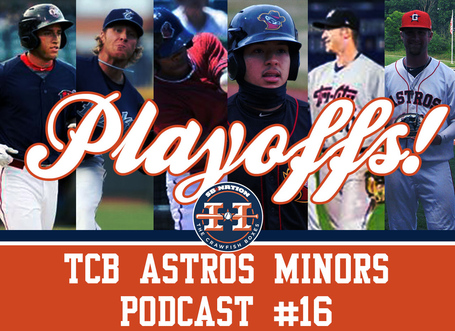 If you have an feedback for the show you can email me at timothy.deblock@gmail.com. And a big thank you to those of you that have given feedback in the comments, via email or by iTunes ratings. We really appreciate it.