As you may have heard, the Houston Astros are hosting the New York Yankees this weekend to (almost surely) end the 2013 seasons of both clubs. Thus, one of the three games would stand to be the final appearance of baseball's soon-to-be-retired career saves leader, provided of course that Mariano Rivera does pitch in the series. Pregame ceremonies held at other stops along the course of Rivera's farewell tour have seen him receive a variety of parting gifts, including a rocking chair crafted quite fittingly from broken bats. The official pre-retirement ceremony at Yankee Stadium last weekend even featured Metallica playing a live version of his "Enter Sandman" bullpen entry song.

The Astros have planned a ceremony of their own for Rivera before the Sunday finale, but about all we know as of Wednesday evening are that former Yankees teammate and current Astros advisor Roger Clemens and former Yankees manager Joe Torre are scheduled to participate and that some sort of gift will be presented on behalf of an organization that Rivera has faced countless six times during his 19-year big league career. So let us take a few minutes to ponder what else may be in store for the festivities honoring the all-time saves leader. And what sorts of original ideas could the Astros possibly conjure up at such a late stage of the celebration for someone who already has just about everything?

Given the grand journey of Rivera's big league career, why not take a moment to reflect back upon its humble origins and retrace the path by which Rivera wound up a reliever? More specifically let's focus on his 1995 major league debut season in which he pitched poorly as mostly a starting pitcher at the overly ripe old age of 25.

Now granted these sorts of Lylesian stats would firmly entrench Rivera as the #3 starter of the 2013 Astros but the point still stands that Rivera began his major league career as a bad starting pitcher and what better way to remind all who have selectively forgotten this fact than by presenting Rivera with a practical and affordable coffee mug to celebrate his rightful place in the annals of baseball history? 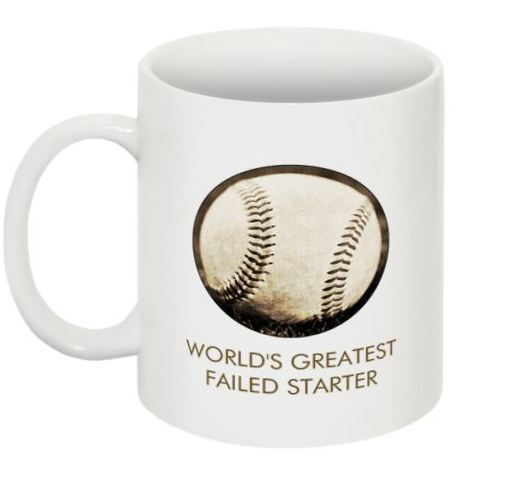 Unlike the Yankees and contrary to recent Forbes' blog estimations, the Astros possess neither the cash nor cachet needed to attract Metallica to MinuteMaid Park for the weekend so that limits the quality of their live music options. Of the handful of serviceable Metallica tribute bands, Kill 'Em All seems like the economical choice given that they need only van down from Dallas for the gig. Alternatively, The Mini Band, as seen and heard below, can likely be booked with only a guarantee of unlimited Mountain Dew and dippin' dots. Regardless of the band selected, which track should they cover? Yeah, "Enter Sandman" seems a bit too obvious and tired, but for a plot twist how about lining up longtime Astros closer Billy Wagner to trot in from the home bullpen after the first few guitar riffs of it just to remind all that ironically Billy the Kid the Astro, no slouch himself by the way, was the first major league closer to routinely climb the mound to the song that has now become somewhat synonymous with Rivera? Or perhaps if you really wanted the tribute band perform a tribute to Rivera then you would smartly have them eschew "Sandman" altogether and only play the far superior track "One", given that that is exactly how many batters reached first base of the sixteen 2003/2010/2013 Astros who had faced Rivera before this series (Super Mariano, meet Superman. Superman, meet Super Mariano.).

While a typical professional baseball career features its share of peaks and valleys, Rivera has experienced a disproportionately high ratio of the former to the latter. Thus, why pass up the final chance to humble the narcissistic inspiration for HBO character Kenny Powers and the pestilent throng of Yankees fans set to invade MinuteMaid Park by reminding them that perhaps the lowest valley came courtesy of Astros' product Luis Gonzalez? They say a picture is worth a thousand words and here the pinstripe outer mat and maple frame selections seem to make the 18-by-22-inch gag gift ensemble well worth the $56.99 price tag which neatly also includes free shipping. 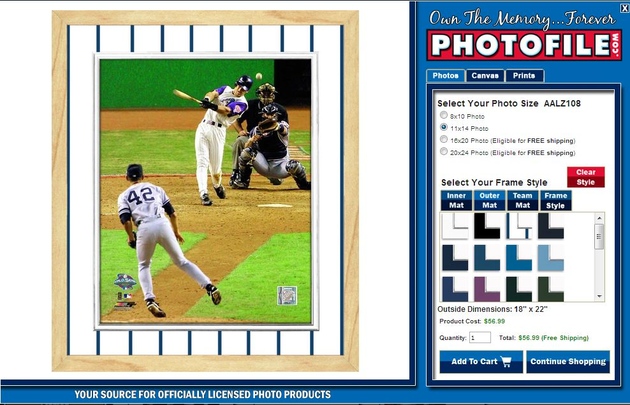 Option 4. The Astros deal Rivera a career-ending blown save and loss

As far-fetched as that hypothetical scenario may sound, wouldn't it be ironic if this rag-tag aggregation of aspiring could-be major leaguers and would-be journeymen dealt baseball's all-time saves leader a blown save and loss in his final big league appearance? Imagine the vaunted Sandman's career ending with a walk-off loss to a team that stands to post the 3rd-worst season winning percentage of Rivera's 19-year career. Would the Yankees even dare allow that slim possibility the chance of becoming reality? And would such a stunning final salvo serve as the proverbial coup de grace to Rivera's faintly flickering Hall of Fame hopes, presuming that they haven't been completely extinguished yet by the cloud of suspicion that comes naturally with being former teammates of the likes of Clemens, Andy Pettitte, Kevin Brown, Jason Grimsley, Darren Holmes, Mike Stanton, Denny Neagle, Jason Giambi, Chuck Knoblauch, Randy Velarde, Jim Leyritz, Glenallen Hill, David Justice, Gary Sheffield, Francisco Cervelli, Melky Cabrera, and Alex Rodriguez during the present, guilty-until-proven-innocent mindset era of the voting membership of the Baseball Writers' Association of America?

So now it's time for your vote be seen. How would you prefer the 110ish-loss Astros celebrate the playing career of another baseball team's Adam Vinatieri, if at all?

Which would you prefer to see the Astros give Mariano Rivera during his MLB farewell series?