On the Astros: Thinking about the Rule 5 draft and its implications

I know why most fans care about the Rule 5 draft and whether Houston will lose players, but should they want the Astros to hold back players? Does the Rule 5 still function the way it is supposed to?

Share All sharing options for: On the Astros: Thinking about the Rule 5 draft and its implications

You're a savvy baseball fan, right? You come to this site to read up on the Astros, so that has to speak well for your decison-making, your wit and charm and all the rest. So, when the GM of your Houston Astros starts talking about Rule 5 implications on this roster and why that affects his decision not to bring up George Springer, you notice.

You start asking us questions about it. We start projects to log every player who might be Rule 5 eligible. We debate who should be protected, who should be kept and who might be lost. We spend multiple podcasts on the topic and will probably continue to discuss it right through the Winter Meetings.

The Rule 5 draft was made with a team like Houston in mind.

But, let's take a step back. What exactly are you hoping for? You're hoping Houston can keep the most talented players in its minor league system in the minors for a little bit longer, so no other team might give them a shot to play in the majors right now.

In short, you're hoping that their dreams get delayed, if they ever get fulfilled at all.

Bet you haven't thought about it that way. I know I didn't until this week. For some reason, it hit me how weird it was that we were actively hoping a player like Carlos Perez doesn't get drafted so he can provide more depth for Houston in the future. This is the same Carlos Perez that got passed over twice late in the season when promotions may have been handed out by the Astros, who were in need of a catcher both times. 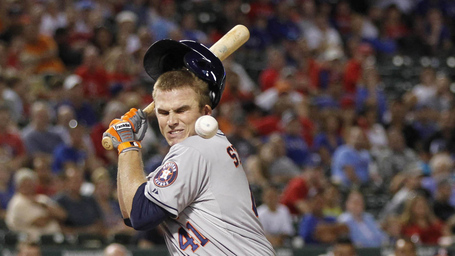 How would you feel if you were in Perez' situation? If your company could have given you a promotion, set you working on a project that you'd been waiting years to begin, to start making a name for yourself in your career, and that company passed you over not once, but twice, for people who either didn't have your experience level or didn't have your potential?

You'd be pissed and you'd gripe to whoever would listen. You'd feel the system was unfair and maybe, just maybe, you'd start looking for another job at a company that cares about you more.

Yet, as Astros fans, we're invested in what's best for the team, the company, more than what's best for its players. Sure, some sports fans become fans of just one player and follow them throughout their careers. I remember people talking about Roger Clemens like that once upon a time.

As a fan, you want the Astros to be in the best situation to win, and that might mean stifling the career of one or two prospects to add depth to the system. What if Houston needed a catcher next July because of an injury to Castro and Perez isn't there? That could derail their shot at .500 (ha ha, yeah right, just seeing if you were paying attention).

The Rule 5 draft was implemented so teams couldn't do this forever. They couldn't horde prospects in the minors forever on the off-chance they might need them in the future. The Rule 5 draft gives these players an opportunity to break in with another team, to get major league time immediately for a team that will give them an opportunity.

We should want those players to have that chance. For any Astro that gets plucked out of the system in the Rule 5 draft, they get to make it to the majors. Every player dreams of getting to The Show. It's not a bad thing that they have an opportunity, especially if that chance may not happen with Houston.

Keep up with all of our Fantasy Coverage

And yet, that's where the Rule 5 draft might be flawed.

As I said, the Rule 5 draft was made with a team like Houston in mind. A deep farm system where one or two players may never escape the logjam at a position. If another team can give them a big league job, great. However, I'd also argue that no big league team is in a position to give players in their farm a better shot at a big league job than Houston right now.

Look how many rookies they used this year. Do you think that they're going to suddenly develop entrenched players across the board next year? No, there will still be plenty of opportunity here in Houston for guys to prove they deserve a shot. There may even be more of a chance for a player to prove himself in Houston rather than as the eighth man in Colorado's bullpen.

On a team with as much turnover as Houston has experienced, players like Max Stassi can suddenly rise to the top unexpectedly. So, is it fair to pluck a guy out of that opportunity onto a team that might not give him the same chance?

This Houston team provides plenty of tricky positions for fans. This is not the first and may not be the last, but it's worth talking about. What do you think?