The TCB staff got together to vote for a minor league All-Star team!

With the close of the 2013 minor league season, comes the opening of the minor league post-season awards. Two weeks ago I sent out a form to the TCB staff to vote for their Houston Astros Minor League All-Stars. No instructions were given on how to vote other than to vote for who they think had the best season at their position. After votes were tallied, we did have an internal discussion on one position that revealed two primary styles of voting. One was solely on better stats while some voted for stats based on better stats relative to league and age.

But, don't worry! You will get a chance to make your voices heard in votes too. Later in the week I will begin posting post-season awards that you all will get to vote on. 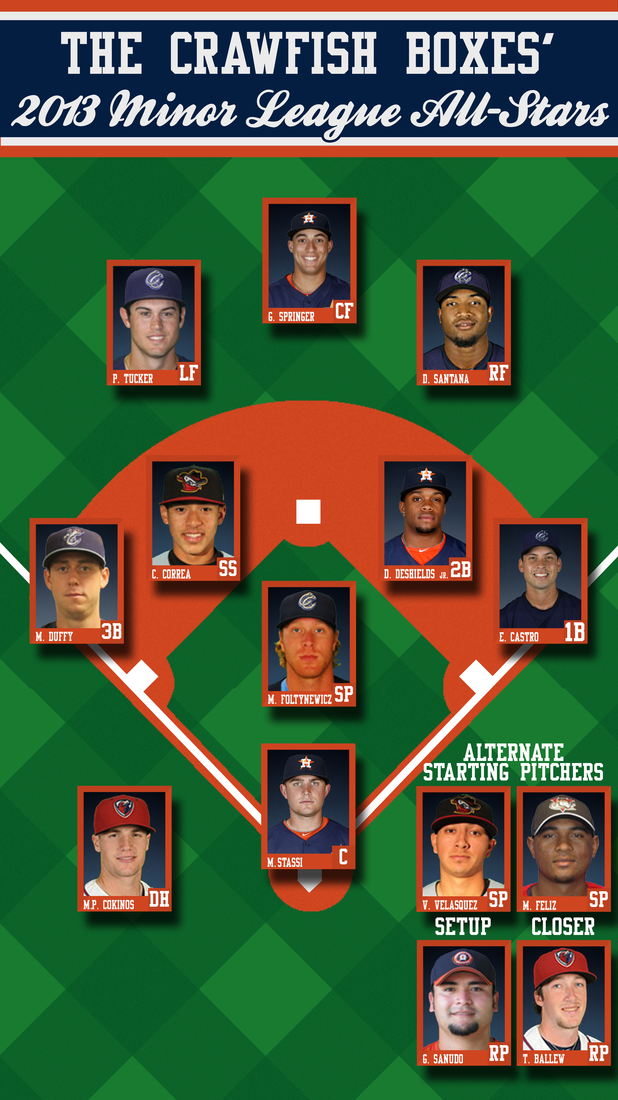 The middle infield is absolutley, prospectfully drool worthy (yes, I did just make up a word). Carlos Correa went from the number one overall pick that some questioned heavily to a potential top-10 prospect in baseball, all in one season. He was in his year 18 season but still hit .320 with a .405 OBP and .467 SLG. He showed phenomenal defensive ability and played well beyond his age at the plate. He showed some pop with 33 doubles and nine home runs. Across the diamond, you have one of the fastest players in the minors in Delino DeShields. After a slow start to the season, he ended with a .317 batting average and a .405 OBP. He showed less home run power in Lancaster with just five home runs but had 28 doubles and fourteen triples. He also stole fifty one bases.

Erik Castro had some success outside of Lancaster in his first season in Double-A Corpus Christi. His home run total dropped significantly this year to 18, but still good on-base skills as evident by his .368 OBP. The other corner infielder was a tough decision and actually resulted in a tie in the voting process. It came down between Matt Duffy and Rio Ruiz. Matt Duffy won the tie breaker. He was second in the system in wOBA with a .417. The only player to beat him was George Springer. Part of that was his environment since he was in Lancaster for the majority of the season, but you can't argue that he wasn't effecting at the plate. He had 19 home runs in Lancaster and an additional five in Corpus which shows his home run power is likely for real since the home run rate was similar.

Max Stassi won catcher quite easily. He hit .277 and launched 17 home runs before getting called up the majors. The home run total was more than he showed last year even in the California League, and in less games. You add in good defensive skills and as strong arm, he had a very successful season.

You can't talk about the Astros minor league system without talking about George Springer's season, much less can you talk about the outfield in general. He was a unanimous decision to be an All-Star (imagine that). When you hit over .300 with a 37 home runs and 45 stolen bases, you receive an automatic spot. Given his defensive chops, he won as the center fielder.

Domingo Santana took a season in Lancaster that jumped his stock up and built on it a year later in Corpus. Sure, the batting average dropped to .252, but he hit more home runs than he did in Lancaster last year with 27. That is a monstrous number for a 21 year old. He still has work to do, but this was still a successful season in that he was able to build on his power numbers. On top of that, his defense in right field drew better reviews. His arm has always been there, but his routes have improved and is showing good range.

The outfield gets rounded out with Preston Tucker. He was phenomenal in Lancaster with a .385 wOBA and regressed in Corpus. He was still good there however. He hit .262 with ten home runs in sixty games. He improved his walk rate to over 10% there as well. He was also better than expected defensively. This was definitely a very solid first full season in the minors.

At designated hitter, we have M.P. Cokinos, because all he does is hit. He raked to the tune of a .367 wOBA and exceed expectations across the board. He had a batting average over .300 and missed .400 OBP mark by just five points. He also hit 28 doubles and 13 home runs. Successful season.

The arms in the system are becoming electric! Mike Foltynewicz exemplifies this to the tee as his blazing fastball topped out at 103 MPH this year and earned him significant innings in Corpus. He ended the season with Double-A ERA of just 2.87 and a total of 124 strikeouts in 129 innings across two levels this season. He's joined by Vincent Velasquez who pitched a complete season without any elbow issues in Quad Cities and Lancaster. He threw 124 2/3 innings and struck out 142. Plain filthy. His season ERA was 3.54 but the 2.98 SIERA is even more impressive. The final pitcher to make it as a starter was Michael Feliz. Feliz was even better with a 2.46 SIERA and 1.97 FIP. Pretty close to this 1.96 ERA in his 69 innings in Tri-City. He also struck out 78 while walking just 13.

The bullpen carries a setup man and a closer. The setup man was Gonzalo Sanudo who almost literally didn't walk anyone. He pitched in Greeneville, Tri-City, and even a short stint in Corpus. He only walked four batters in his 38 2/3 innings, and two of those were intentional. He also struck out 51. That comes out to one of the most impressive K/BB ratios of 12.75 that I've ever seen. No wonder he had a 1.16 ERA and 1.22 SIERA. The closer was Lancaster's closer, Travis Ballew. The small pitcher who runs it up into the upper 90's was amazing. He has a 13.07 K/9 this year in his 52 1/3 innings. He was just dominant at times. His 4.47 ERA was overly inflated and doesn't hold a light to his 2.58 SIERA.