The Voice of the Modern Fan: Blogger Night At MMP

Monday night the Houston Astros Media Relations department invited Astros bloggers to gather at a game, spend some time with Mike Fast, and Reid Ryan and watch their favorite team.

For the past two years the Astros front office has been navigating their way to understanding and better interacting with bloggers. After all, we are the voice of the modern day fan. At the start of the season we were invited to FanFest, getting the chance to sit down with several players, Bo Porter and Jeff Luhnow. Monday was a less formal affair, gathering all of us with our hosts from Media Relations as well as with Analyst Mike Fast prior to first pitch followed by some in-game time with Reid Ryan. In attendance from the Crawfish Boxes - Chris Perry, Bob Gerringer, Ryan Dunsmore and myself.

Despite the fact that the Astros blogosphere is a relatively small community, a great number of the group live out of town, meaning we don't all know each other from day-to-day life, but yet, there's a respect and camaraderie amongst our group. It's an understanding of the time, the dedication, the love of the game that immediately puts us all on common ground. There were writers in attendance from Crawfish Boxes, of course, but also What the Heck, Bobby, Climbing Tal's Hill, Astros County and Baseball Beer Season.

We likely appeared just as any other group event at Minute Maid Park; 12-15 people, beer in hand, chatting in the concourse on the club level prior to the game, but I'd bet anything that our conversations weren't anything like that other group down the hall. For example, Steve Grande (Astros Media Relations) asked Mike Fast if Chris Carter's 6'7" height meant that umpires weren't accustomed to the the angle at which they view his strike zone. My obvious solution to what may or may not be a problem was to convince Mike and Steve that someone needed to get Carter to wear high socks for a couple of weeks as a trial period, thereby defining the bottom of the strike zone for umpires. Who knows, maybe he'd walk more? 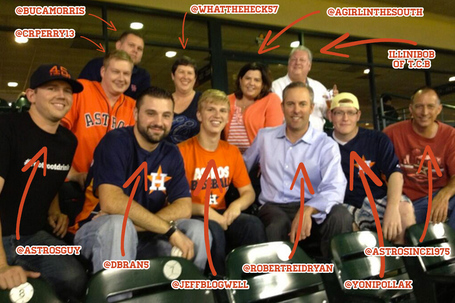 I heard conversations about how the bloggers interact with the organization as well. For the most part bloggers operate very independently with little or no input from the club, but over the course of two season we're finding ways that we the blogosphere can be better informed by the Astros while still recognizing that we are not like traditional media. It's a fine line that everyone's still navigating.

Even with limited access, the Astros blogs as a whole provide a great service to fans - a perspective that isn't that of traditional media while still giving great commentary and analysis. In fact, we were all paid a great compliment by Mike Fast both Monday night when he told me he enjoyed the level of discourse and last night when he told the whole world on twitter. Read the tweets from the bottom up. 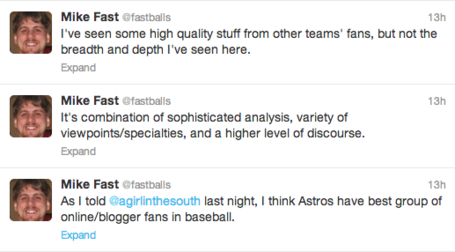 This is a front office that values what blogs bring. We've seen it in the way that they've continued to try to work with all of us, but also very much in the way the front office has treated us. GM Jeff Luhnow has always made it known that he reads what's written and often interacts with bloggers on twitter and in person. Mike Fast and Kevin Goldstein both spent some time doing online writing themselves - analyzing baseball from outside the establishment. So it's a unique organization when it comes to digital media as a whole, but it's still a work in progress.

During the game itself President of Business Operations, Reid Ryan came by, sat in the stands with us and answered a few questions. Reid is probably one of the most approachable and fan-friendly presidents in baseball, so to see him interacting with people in the stands was nothing new. He shared his insights on what was happening with CSN Houston (and no, there's not much new at the moment), and commented on the upgrades to the sound system in MMP.

Ryan was, as always, himself. He's simply a nice guy who is willing to talk to anyone who asks a question. And despite knowing that any of the crowd he was with could be writing about what he was saying, he was as comfortable as can be, open and inviting and not one word of that Texas drawl seemed to be contrived. He's exactly the breath of fresh air that the Astros needed in a president, although he did mention something about missing the dress code of the very casual minor leagues. I can't say I blame you, Reid.

After Ryan said his goodbyes and headed back to front officeville, the group had a great time joking about things the others had written, getting to know the folks we'd never met, and catching up with those we've known while watching the Astros take loss number 99. It was a fun night at the ballpark, indeed. Thank you to Steve Grande and his team in media relations, Reid Ryan and Mike Fast for hosting us.