On the Astros: Can fandom and sports hate change?

What's it like to be a fan? Do we reach certain points as fans where we lose the unadulterated "hate" for opponents or other players? Or am I alone in this as a sportswriter?

Share All sharing options for: On the Astros: Can fandom and sports hate change?

For the past few years, my aunt has sent me a great birthday present. She goes into my Amazon wish list and sends me Kindle books to read. She picks out two or three and I've instantly got some new reading material. Sometimes, I had forgotten I'd put a specific book on my wish list in the first place.

More: The Astros garden Stan Musial, Earl Weaver and why we care It's a matter of trust

That's sort of what happened this year with Chuck Klosterman's new book, I Wear The Black Hat. It's one I wanted to read, because I love Klosterman's stuff. He makes me think while also talking about dumb pop culture stuff I also obsess over.

So, I'm reading along, not particularly thinking about baseball, until I got to this passage, presaged by his list of the 15 artists he'd hated in chronological order.

I could no longer construct antipathy for random musicians, even if they deserved it. My personality had calcified and emancipated itself from taste.... And this was a real problem. Being emotionally fragile is an important part of being a successful critic. ... If you hate eveything, you're a banal asshole...but if you don't hate anything, yo're boring. You're useless.

He's talking about music, and how he can no longer hate the Eagles. But, it instantly made me think about myself and my fandom. See, I used to be the same way. I could name players and teams I absolutely despised and would never root for in a million years. Jim Edmonds? Die like a dog. Kevin Brown? Mention him and I'd go nearly apoplectic.

I don't hate any particular baseball team. Not the Red Sox. Not the Yankees. Not the Angels or the Rangers or the A's or the M's. Heck, I don't even "hate" the Longhorns like I used to, even if I do delight when they struggle.

Realizing this because of Klosterman's passage got me thinking about the Astros. If I don't have that burning hatred of a thousand suns for Josh Hamilton, am I a bad fan? Am I disconnected from the team in some key way? 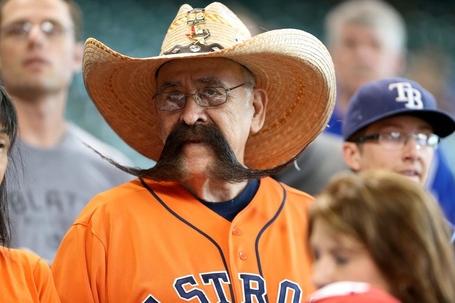 This is not an insignificant question, by the way. As a sportswriter, I'm not supposed to be a fan. I don't cheer in the press box and I try to stay as objective as possible when dealing with the teams I cover. That bleeds over into how I watch games for fun, too. I rarely spontaneously cheer any more when watching a game, and am usually just quiet, like I would be if I watched one in a press box.

That's been going on for years, so it doesn't even bother me any more. But losing the hatred, too? Can I even call myself a fan?

Another reason this is an important question (for me to obsess over) is the vantage I'm writing from here on SB Nation. Way back when Tyler started his merry band of baseball blogs in 2005, he wanted to showcase the fan's voice. These were fans writing for other fans. That's what makes SB Nation and Vox Media so great. We here at TCB are just as invested and irrational about the team as you are.

I'm still irrational about things, like George Springer's call-up. But, I don't get frustrated with the losses and I don't get overly excited about wins, either. My fan sine wave has just leveled out a bit.

Is this just me? Or does the CSN Houston situation matter more than anything? Has the lack of access to games been my undoing as a fan?

It's a tricky line, right? On the one hand, watching the team every day is the hallmark of a good fan. Just look as excellent article in the Chronicle on Astros superfan Greis. Her being at the games is seen as a sign of a great fan. So, if you can't watch the team or listen to them on the radio, how much of a fan can you be?

What's an Astros fan do to? 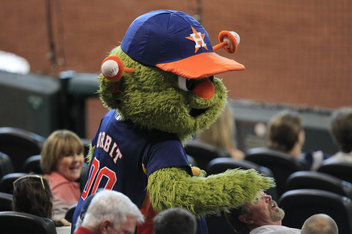 Terri talks about the challenges of being an Astros fan this year.

What about the losing? Is the leveling of my emotional spikes a product of three straight 100-loss season? If the Astros were in the playoff race right now, would I feel differently? Basically, have we, as fans, been desensitized to losing? If so, I have to think that's a terrible by-product of the rebuilding effort and one that can't easily be erased.

I'm going to keep writing about this team for as long as I can, until they pull the control out of my clammy, typing hands. But, I constantly worry if my perspective is the same as the rest of you. If I like every move the front office makes and I never hold them accountable for the losses, I've become just as useless as Klosterman describes above.

Am I changing for the worse? Am I alone in this change? Talk to me about this. Has your fandom changed in the past few seasons, outside the focus on the minor leagues? Did the move to the AL strip you of your sports hate too, or have you developed other teams to dislike?