Where we talk about the best farm system in baseball, newly-acquired prospects, a good pitching prospect with an ERA over 5.00, the two best friends that anyone could ever have, and walk-up music.

Before we get into the recaps and such, here are two articles you should read:

The first one is from Brian McTaggart on the Astros "top six Minor League Affiliates" being in first place to begin Wednesday's action. With the Astros Major League team headed for 100 losses and the worst record in baseball for the third consecutive year, many of us Astros die-hards are well aware of the Astros' Minor League success, but 105 games over .500 is pretty dirty.

As Anthony pointed out on Twitter, the Astros Minor League teams haven't been this successful since 2001 (which looks like an outlier to me).

The second article is from our one of my favorites, reillocity. Per usual, he waves his magic wand to provide us all sorts of statical goodness in regards to newly-aquired prospect, Josh Hader. You may remember Hader being one of the pieces in return for Bud Norris, along with Hoes (HAHA gets me every time) and a very valable draft pick.

Hader pitched well in his Astros (Quad Cities) debut, going six shutout innings, in which he allowed only one baserunner. Here's what reillo summarized following his study of Hader in comparison to other left-handed pitcher in the minors:

Josh Hader is exceptionally young relative to his level of competition and currently grades out rather well versus his peer group of A-ball lefthanded starters in terms of overall performance on the studied fielding- and ballpark-independent outcome stats. In terms of his prospective development as a pitcher, control and line drive plus flyball avoidance would stand to be the 2 current areas to target for incremental improvements, with any steps forward in the latter category serving to offset some anticipated regression back toward his peers in aerial pull rate.

Anthony properly congratulated Dave Martinez in yesterday's recap, for setting the Hooks' single-season record for wins. Tonight we learned that he was promoted to Triple-A Oklahoma City.

It's about time he was promoted, but I don't think it was a coincidence that his promotion followed his record-breaking win. Despite Martinez's incredible season, I highly doubt he will ever compete for a spot in the Astros rotation. However; the pitcher voted to have 'the best control' in the Texas League may be able to carve himself out a role in a Major League bullpen someday – rooting for him.
--
Mike Foltynewicz had a no-hitter after five innings, but then the wheels completely fell off. After recording the first out of the sixth, Folty allowed a solo home run, followed by a HBP, a single and two walks. Fortunately the sixth inning was the only inning in which the lowly Naturals scored. Enrique Hernandez's pinch-homer in the bottom of the eighth transformed an otherwise sloppy performance into another win for the Hooks.

A terrific bounceback performance from Aaron West and a big night from Joe Sclafani was enough to earn Lancaster their 68th win of the season, although, in true Astros fashion, the bullpen made things interesting towards the end.

For the second week in a row, I want to assure anyone who's worried about Aaron West (and Brady Rodgers), not to. West's ERA is well over 5.00, but he's still a good pitching prospect. West's strikeout/walk ratios are fantastic and his FIP is below 3.00. Coming into Wednesday, the difference between his ERA and FIP was an absurd 3.11 – insane, even for the CAL League. Most of that is attributed to his near-.400 BABIP against. Although his LD% is significantly higher than league average, his BABIP should not be anywhere near .400. The important thing is, he hasn't appeared to let the Lancaster launching pad ruin his psyche. If I'm not mistaken, West cited strikeouts and walks as his indicators for success at Lancaster on a TCB podcast, in April. Judging by those standards, he's had a great year.

Oh, Andrew Aplin, if you need him:

Deep fly ball to CF? There’s an "Ap" for that. Andrew leaps at the warning track to rob Humphries for final out of 1st inning.

Tony Kemp seems to be acclimating himself to Quad-Cities just fine – still one of my favorite prospects from the 2013 class. Teoscar Hernandez is basically 75 percent of what we wanted Ariel Ovando to be, which is cool. I'm glad Rio Ruiz seems to be hitting his stride a little bit. Carlos Correa is a doubles machine. Lance McCullers is a boss, with a capital B. #unrelatedsentences

A scary moment for Lance McCullers Jr. on Wednesday, when he was hit on his wrist (non-throwing hand) with a comebacker. Luckily he stayed in the game and it's been diagnosed as "just bruised".

Oh, and apparently Rio Ruiz's walk-up music is We Can't Stop by Miley Cyrus, because of course it is, and I totally picture him just sitting in his room listening to Miley Cyrus and eating In and Out Burger, because that's all he talks about on Twitter.

Conrad Gregor apparently likes to mourn by hitting walk-off home runs. Earlier this week, his bestest buddy and college teammate, Tony Kemp, was promoted to Quad Cities. On Wednesday, Gregor hit a walk-off home run and this celebration pic is great, and also sad, because I feel like Tony Kemp would be either A) on Gregor's back or B) smashing a pie in someone's face, and man, I hope Conrad re-unities with Tony soon.
TONY AND CONRAD FOR LIFE! 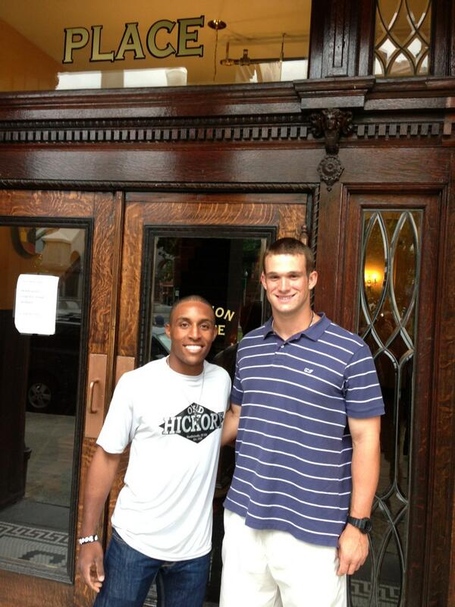 Adrian Houser is also quietly having a good season for Tri-City. The Astros second round pick in 2011 hasn't quite progressed into the pitcher many had hoped, but he's still only 20 years old. He's cut down on the walks significantly this season and induces a good amount of groundouts – might be a post-hype guy to keep an eye on.

Austin Nicely and Devonte German were the two high-upside, over-slot high school pitchers the Astros drafted in the 2013 MLB Draft. I'm equally excited for both, but they have a long ways to go. It will be interesting to see how they progress. German is already one of the most physically-imposing pitchers in the system. If baseball doesn't workout, maybe he can backup Brian Cushing.