Jarred Cosart...fact or fiction? Starter or Reliever? Elite Prospect or MLB Filler? Experts debate, but Cosart has done naught but dominate. This post shows why Astros fans should be excited...or not.

[Ed. Note: This Article was written before Cosart's start against the Red Sox on Wednesday.]

Minor League Baseball prospect evaluation creates monkeys out of more people than John T. Scopes ever did. Take, for example, these completely out-of-context quotes, gratuitously lifted from whatever narrative their writers actually constructed and presented here to artificially illustrate my own point.

"Overall Future Potential: 6; late-inning reliever...has the stuff to pitch in major-league bullpen. Highly unlikely to reach ultimate ceiling because of lack of pitchability."

"...his command of the breaking ball comes and goes, thanks to inconsistent mechanics and a wavering release point. He hasn't shown much of a change-up in the past, leading many scouts to rate him as a future reliever."

"Like most people, I still think Cosart has the floor of a short reliever..."

--Me, The Crawfish Boxes

"The ultimate profile here looks to me to be a relief arm..."

The writers above referred to Houston Astros' starter Jarred Cosart, recently promoted to the big leagues, where he currently boasts the lowest ERA out all starters who have pitched at least 20 innings, just ahead of Royals' ace Bruce Chen. Please go read the linked articles so you can see what the writers really said on the subject.

As the quotes indicate, a large number of professional scouts, amateur scouts, and wannabe scouts think and thought that Cosart's ultimate destination resided in the bullpen. The Astros disagree, at least for now, and after they doggedly trotted the 23-year-old right-hander out to a minor league mound every fifth day, he finally made his major league debut -- as a starter -- on July 12, 2013.

This post is a cautionary tale against making assumptions based on out-of-context quotes, small data samples, and against believing everything you read. During Cosart's first four starts, he allowed only four runs (three earned), good for a 0.96 ERA. His fastball velocity has averaged 95 miles per hour, good for eighth among all MLB starting pitchers this season (Note to self: Check out the Marlins' Nathan Eovaldi in fantasy leagues...he's throwing over 96 on average).

Despite his stellar run prevention, Cosart has Roy Oswalted his way to only one win due to an inept offense and even more inept bullpen. Welcome to the Astros, kid. One wonders if Cosart's record-paced start has changed the minds of those critics who think that late-inning relief work is his eventual fate.

Of course not. There are always critics. But fans should feel encouraged nonetheless.

As noted, one of Cosart's best weapon is his fireball. On average, his Four-Seam and Cut fastballs have resulted in a positive outcome for the Astros (strike, foul, or out) six out of every ten times he threw them. When batters elected to swing, only six of every hundred pitches resulted in something bad (runner reaching base or scoring).

Fangraphs says Cosart's cut fastball is worth 3.26 runs above average per 100 pitches. For comparison, Mariano Rivera's Hall-of-Fame worthy cutter is valued at 2.17 runs/100 for his career. For those who struggle with numerical comparison, that means that during his first four starts, Cosart's cutter has been one of the best pitches in the history of professional baseball.

During his first four starts, Cosart's cutter has been one of the best pitches in the history of professional baseball.

The reason for his cutter's success seems to be its similarity to the four-seam fastball. The cutter comes in only half an MPH slower (94.6) than his bread-and-butter (95.3), but it sports a noticeable break. The mere two inches difference in average break between the two pitches may not seem like a lot compared to the distance between the Milky Way and the Perseus Cluster, but in baseball it can turn contact into a whiff, or turn a hard hit off the bat's sweet spot into a dribbler that can even make the worst defender look like Ozzie Smith. It matters; those two inches are almost as large as the diameter of the baseball itself.

The trick is, Cosart's cutter looks exactly like a four-seam until it'ts too late for the batter to do anything with it. The spin angle and rate are very close between the two pitches, but the cutter features a late break that is more horizontal than vertical.

The difference looks almost indecipherable on the TV screen, so one can just imagine how a batter troubles to distinguish between the pitches when they come in at Mach 1. Take a look at these GIF's, courtesy of TCB's Tim DeBlock:

The difference is subtle, but there is a difference. Though both pitches cross the plate in very close to the same location, from befuddled ex-Astro Luke Scott's perspective the cutter looks like it starts outside the strike zone, and then it breaks inward about halfway along its trajectory.

During last night's broadcast, Astros' radio announcer Steve Sparks had this to say about Cosart's cutter:

"Cosart’s best pitch is a fastball with a lot of cutting action. Sometimes it has so much movement that it looks like a slider. But then you look up at the velocity, and it’s 95."

Control, Control, You Must Have Control

A sound-barrier breaking fastball is not enough to induce the type of results that Cosart has seen during his MLB career so far. What good is such a fastball if the pitcher has no clue where it will end up? 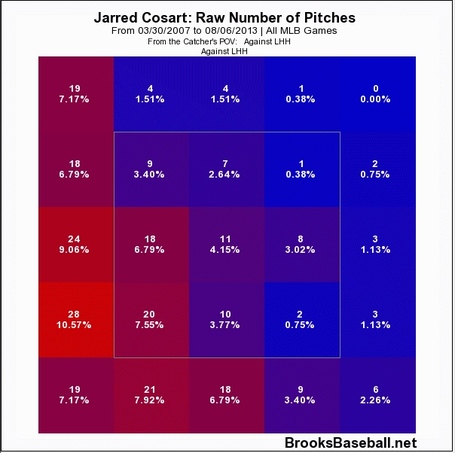 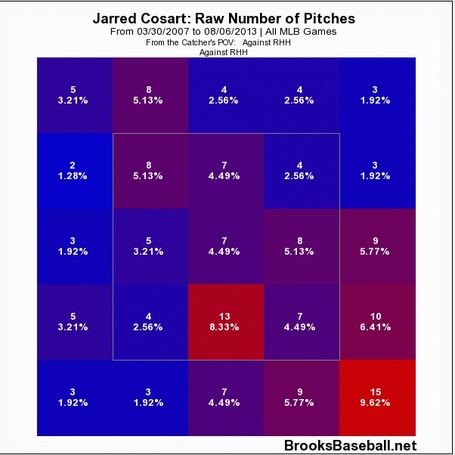 These charts show that Cosart is placing a majority of his pitches in the lower corner away from the batter, within or just off the strike zone. This spot is the most likely to induce a ground ball, as the batter will have a tendency to hit the upper portion of the ball, increasing a fastball's spin and driving it downward into the grass, turning it into a grounder. This type of command, which eluded Cosart for most of his Minor League career, takes pitchers with good stuff and renders their offerings unhittable.

Time for the buzz kill. It takes no leap into the world of metaphysics to predict a regression for Cosart. His on-field earned run numbers have reached miraculous levels of success, but the foundation is built only on a world-beating cutter, particle accelerator-worthy velocity, and luck.

No amount of blind Astros homerism can argue that Cosart's fastball/cutter combo will continue to be exponentially better than Rivera's, nor can one expect any pitcher to sustain a Batting Average on Balls in Play as low as Cosart's. For those unfamiliar with the more nerdy aspects of sabermetrics, BABIP can be summed up thusly:

Now, take a look at the chart below. 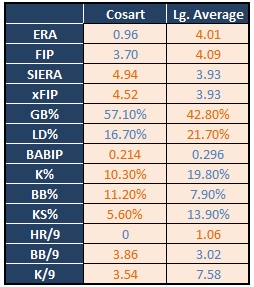 So by ERA, ultimately the only one of these stats that matters in terms of wins and losses, Cosart has pitched fantastically. Popping the hood (or bonnet, if you don't hail from this neck of the woods) uncovers a bunch of parts that really have not operated at peak performance. Fielding Independent Pitching is calculated based on Home Run, Strikeout, and Walk rates, and Cosart's looks pretty good. But xFIP, which very reasonably assumes a league-average Home Run rate, and SIERA, which discounts Home Runs entirely, frankly stink.

These projective stats show that in a vacuum, one probably can expect Cosart's ERA to rise drastically. A twofold problem causes this:

The good news is that Cosart's Ground Ball percentage is pretty close to his minor league rate, and that he has always given up fewer Home Runs on average than his peers. So while advanced metrics project Cosart to regress quite a bit from his current and admittedly unsustainable success, he still has some tools that should leave Astros fans expecting improvement and hoping for fulfillment of his Top of Rotation ceiling. These tools include his cutter, a sharp curveball, his ability to generate ground balls and limit homers, and his elite-level fastball velocity.
[Ed. Note #2: Cosart pitched 5 innings with only 2 earned runs in last night's game. However, he struck out only three batters and walked five. So the good results continue, despite shaky peripherals.]

A Question for Another Day

So far, Cosart has shown a lethal Fastball/Cutter combination that hitters have been unable to figure out. Like Rivera, the spectacular actual results don't match the sabermetric projections.

Does a pitcher who, a majority of the time, throws two almost-but-not-quite-identical pitches create enough imbalance that the hitter literally cannot adjust? Could this be one way to "beat the system" and outperform one's Runs Allowed projections on a regular basis? It's not a question that can be answered here, but it may be a reason to hope that Cosart can outperform the limitations currently established by his sub-par walk and strikeout rates.

During the course of researching this post, I stumbled over an interesting comparison. On the Fastball velocity chart, Cosart ranks 8th, just behind the Rays' Chris Archer, whose fastball averages 0.2 MPH higher than Cosart's. Archer is also a Rookie, is only 24 years old, and like Cosart, doesn't strike out as many batters as his velocity says he should (6.15 K/9 this season compared to a 7.58 league average). 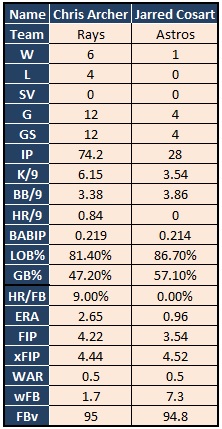 Look at those xFIP's. Look at those velocities and BABIP's. Look at those walk rates. They look awfully similar, and Archer's minor league numbers track closely with Cosart's well. At the end of 2012, MLB.com's Jonathan Mayo ranked Archer as the #81 prospect in baseball, and Cosart at #76. Here is what Mayo had to say about Archer:

He also needs to improve on his command and lower his walk rate. In 2012, Archer built on his 2011 second-half turnaround and showed that he still has the pure stuff to be a frontline starter, getting his first taste of the Majors in two June starts. Worst case, that fastball-slider combination sure would look good in a short-relief role.

fangraphs.com, texasleaguers.com, BaseballReference.com, brooksbaseball.net, minorleaguecentral.com, and my own Pitch F/X database, which I would not have been able to create without excellent instructions left behind by Astros analyst Mike Fast before he joined the real baseball world.