A bit of background. I attended this year's SABR convention in Philadelphia. When planning the trip, my friends and I discovered that flying into Baltimore was much cheaper. So we decided to go to Baltimore, and catch an Orioles game before heading to Philly the next day. Much to my surprise, the Orioles were playing the Astros, a team I've been following with some great interest this year. (You can read my backstory in my piece for NotGraphs). I was pulling for a Bud Norris start for the Orioles, since he had just been traded, but instead I got to see Brett Oberholtzer's first career start. It was a doozy; seven innings, six strikeouts, three hits, no walks, no runs. He followed that performance with an almost-as-good outing on Monday vs. the Red Sox. This we already knew. What I wanted to know is what Oberholtzer was doing to be so effective.

As it happened, one of my friends invited a very smart baseball person to join us. I won't say who, as to avoid looking like a name-dropper, but let's just say he's on the radio talking about baseball every weekday, and has been covering the game for a long time. He mentioned that Oberholtzer was getting a lot of bad swings and weak contact. We thought, since Oberholtzer doesn't have overpowering speed, that this might come from deception -- something about his delivery and pitch selection was throwing batters off somehow. This led me to think of the Athletics' Tommy Milone, another lefty with low velocity who is known to get by with deception.

Milone is an interesting case. He's a fly ball pitcher -- his ground ball rate is over 10% lower than league average -- who manages to have a BABIP below league average. He doesn't strike out many batters, and is pretty average when it comes to walks. Both his ERA and FIP are up significantly this year, as are his walk rate and home run rate, which has led to a recent demotion to Triple-A. But, he's just 26 years old and was worth 2.9 wins last year. Milone throws even softer than Oberholtzer -- averaging 87 MPH on his fastball -- but still managed to be a very serviceable starting pitcher for a first-place team last year. This is what has brought on the "crafty" label.

Oberholtzer, like Millone, has a low swinging strike percentage, so he's not going to blow anybody away with speed or pitch break. However, it is still possible to be an effective pitcher with out blazing or knee-buckling stuff. If a pitcher is able to throw hitters off enough to get weak contact, than can lead to an increase in ground balls and/or lazy flies.

With only two starts under his belt, it's hard to use a lot of numbers to compare Oberholtzer without violating the sacred rules of small sample size. Let's, instead, go to the video tape. Well, to the GIFs, technically, but you get the idea. I don't know how to put a video tape into the Internet yet, but I'm sure Apple is working on it. Anywho…

This is footage of both pitchers at Minute Maid, though it seems they moved the camera between starts.The Oberholtzer footage is from Monday, while Milone's is from July 22nd. Oberholtzer has a higher leg kick, while it seems Milone might drop a little bit more in his delivery. But there are similarities here. Both tend to pitch out of a three-quarter arm slot and keep their glove hands away from their bodies through delivery. They also tend to bring their pitching hands down and away from them during windup, and bring the ball forward in a similar path. Then there's this: 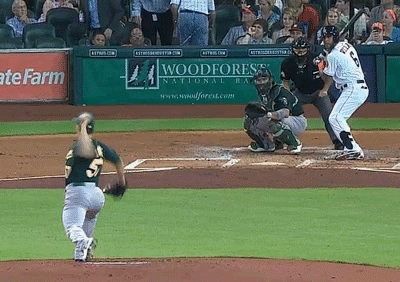 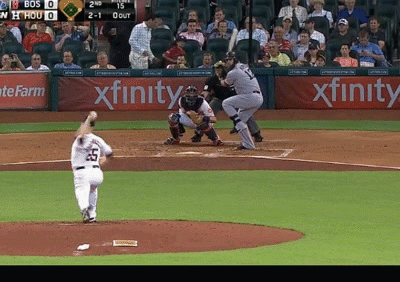 There are two things to take away here. First, these stills make it look as if both pitchers have bulbous butts. More importantly, though, is the position of their hands right before release. They tend to tuck the ball behind their heads. This could give the pitchers a few extra split seconds to hide the ball from the batter, making it harder to pick up. Considering the batter only has about half a second to decide whether to swing or not, even a few milliseconds of indecision can help a pitcher. Compare this to another lefty:

This is of Barry Zito, courtesy of our friends at McCovey Chronicles. It's not terribly easy to see, but you can definitely notice how Zito holds the ball further away from his noggin. The head block (I'm positive that's not a term. Is now!) that Milone and Oberholtzer feature allows them those precious few seconds a soft-tosser might need to be effective. One can not get by on deception alone, however. He needs to have the stuff.

With Milone, his best stuff is his changeup. Last year, Milone's change was rated 13.2 runs above average. This year, it's only 3.4, but it's still his best pitch by far. The early indicators show that Oberholtzer's best pitch is also his changeup. With Milone, it's pretty clear the value in his changeup is its location, especially against right-handers. If you're throwing soft from the opposite side, it better be low and away. And Milone does that. Here's his heat map on the change against righties this season. 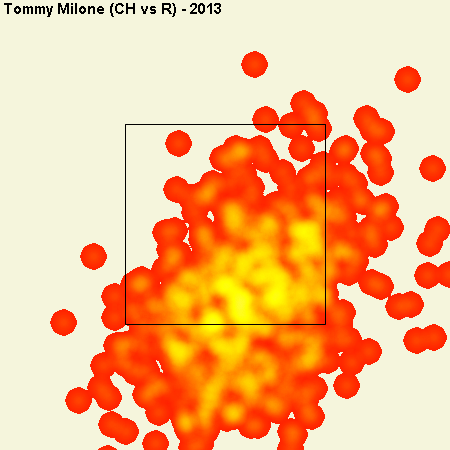 Again, small sample, but it appears Oberholtzer's taking a good approach with his changeup.

There is one thing Oberholtzer edges Milone on; the speed difference between his fastball and changeup. Milone hovers around the 7 MPH zone, while Oberholtzer is a good 10 MPH difference. For context, here are the starters with the biggest differences in velocity between the heater and the change:

Not everyone on this list is a world-beater (heck, even a few Astros make the list), but Oberholtzer, had he obtained the innings minimum, would also be on this list somewhere between Andrew Cashner and Julio Tehran. Not bad.

Comparing Oberholtzer to Tommy Milone might not bring sunshine and rainbows to the hearts of Astros fans, but Milone, despite his problems this year, is still a sold back-of-the-rotation starter. Jared Cosart is here. Guys like Mark Appel and Asher Wojciechowski are coming. When the young pitching studs get the call, a team still needs bodies to fill out the rotation. Oberholtzer, if he can stick as a starter, could fill that roll. He's not going to be an ace, but a cost-controlled starter is nothing to sneeze at. If Oberholtzer can continue to mirror what Tommy Milone has done so far, the Astros will have just that.

(All stats via FanGraphs)