Why You Should NOT Worry About Domingo Santana

A look Astros prospect Domingo Santana performance compared to other 20 year olds at AA since 2006.

Share All sharing options for: Why You Should NOT Worry About Domingo Santana

Have you ever fallen into the YouTube abyss? You start with a YouTube video you were sent through email or found on a message board, and the next thing you know, you are watching your 14th video that is nowhere near related to the original video. You got there by clicking suggested or related video and wind up completely lost down the YouTube rabbit hole.

When I get bored. That's what happens to me except, it's not YouTube, it's baseball-reference or fangraphs. Today, I wound up looking at Domingo Santana. I'm not sure how I even got there. I believe I was just looking at top WRC+ performers in various minor league classifications and leagues. I noticed that in the Texas League, even though Domingo Santana's prospect status has cooled slightly since the big year in the Cal League, he's still among the top in WRC+ in the Texas League. Also, he is still only 20 years old.

Then, I began to wonder how other 20 year olds have performed in the Texas League. Then after that, I began to wonder how they have performed all three AA leagues. The list that showed up was quite impressive. Fangraphs only has minor league statistics that go back to the 2006 season, so that's as far back as my WRC+ research goes. The Astros players are in red. Here's the table (sorted by WRC+):

Domingo Santana may not have the prettiest K%, but he joins some pretty exciting company at the top of this list.

Ronald Torreyes (the Astros sent the Cubs an International Free Agent slot for him) also makes the list.

Matt Dominguez makes the list and would you look at that AA walk rate for Matty D! 9.7%! Are you kidding me?

Of course, this list should also help us to remember that even though Jonathon Singleton is struggling at AAA, it is no where near time to freak out about that.

Altogether it's impressive to see that the Astros have 4 players on this list. More than any other team. 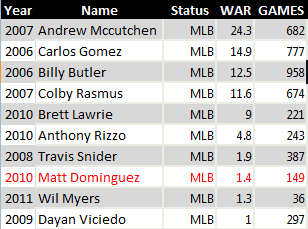 10 of the 20 players from the original list are currently in the MLB. Six of those players are outfielders. When you divide out the WAR production over a 162 games season, this list averages 3.0 WAR per season. This bodes well for Santana being at the very least an MLB contributor one day.

The rest of the list is composed of Prospects and some guys although not considered prospects, have yet to finish their baseball journeys.

Anthony Gose has been up and down with the Blue Jays. He was considered one of the best CF prospects in the game not too long ago. You may also remember that we traded him for Brett Wallace.

Francisco Martinez, Bryan Anderson, and Andrew Lambo have not quite panned out, although Lambo has shown signs of figuring it out at AAA.

It should be comforting to know that half of the players in the original table have made it to the MLB. It is not crazy to say that 2 of the Astros' 4 players on the list should make the MLB. At least one of those players should be a major producer. This is also another reason to be excited about what the near future holds.