I have some concerns about the Astros process for evaluating outfielders.

Share All sharing options for: Jeff Luhnow And Evaluating Outfielders, A Response

While I was on vacation a couple weeks ago I was hit by a bus.

A metaphorical bus driven by The Cyborg, David Coleman, but a bus none the less. In an Astros three things, Justin Ruggiano's name came up, which promoted David to bring up a conversation he and I had about Jeff Luhnow and evaluating outfielders. This, of course, sparked conversation that led to the metaphorical bus being backed up run over me again and again. Now that the bus has stopped, (for a short time at least) I am ready to respond and clarify.

The conversation David and I had regarding Ruggiano happened shortly after J.B Shuck robbed a home run while he fell into the stands and Jake Goebbert had done some things against his former baseball organization. Fernando Martinez, Jordan Schafer and Rick Ankiel were among the other names discussed in regards to Luhnow's aptitude for evaluating outfield talent.

Do I think Luhnow will have a problem evaluating outfielders? No.

Do I think he's had a problem evaluating outfielders? Yes.

This, of course, sparked conversation that led to the metaphorical bus being backed up run over me again and again.

*It's worth noting that FanGraphs has him at 3.8 WAR in the same amount of plate appearances.

Let me address something here, Ruggiano is 31 this season and has limited value for the future. Had the Astros kept him and played him, I would not have expected him to currently be in the Astros uniform. I would have expected the Astros to trade him like they did Justin Maxwell this season. There's a significant difference in trading an aging minor league outfielder hitting a 152 wRC+ and a 30 year old major league outfielder hitting a 145 wRC+.

Speaking of Maxwell, that acquisition is certainly a counterpoint. Maxwell posted a 2.5 WAR in his time with Houston and allowed the Astros to acquire a nice young pitching prospect that sent some Royals fans into a frenzy and minor league evaluators into befuddlement.

Aside from those two guys Fernando Martinez, Jason Bourgeois, Steve Peace, Ben Francisco, Jordan Schafer, Brian Bogusevic, J.B. Shuck, Scott Moore, Rick Ankiel, Chris Carter, Robbie Grossman and LJ Hoes are all outfielders who have played for Houston that have been acquired or released/traded by Luhnow. 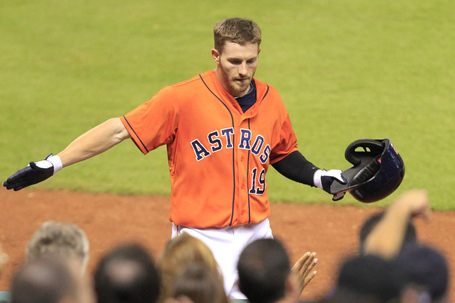 Outfielders that have played for the Astros have posted a .3 WAR for the Astros, during Luhnow's tenure. Outfielders that have been released or traded have posted a 1.9 WAR for other teams, which a majority of that positive value belongs to Ruggiano.These numbers will shift in the future and will likely change in Luhnow's favor if Grossman and Hoes can establish themselves at the major league level. Each has posted a .3 WAR in their short time with the Astros, but that's only happened recently and when David and I had our conversation neither had played that well at the big league level.

It's also note worthy to point out that I was not the first to say that Ruggiano was a black mark on Luhnow's permanent record, both David (YES! D-A-V-I-D) and Jordan have said as much previously on the Crawfish Boxes. If the Astros could take that trade back I'm sure they would, but they haven't exactly been hurt by trading Bourgeois and releasing or waiving Martinez, Pearce, Francisco, Schafer, Bogusevic, Shuck or Ankiel*; However they have been hurt by acquiring Martinez and Francisco and playing Schafer. The other three outfielders acquired by Luhnow, Pearce, Ankiel and Carter, have all played at a replacement player level, which is not exactly helping the team. Most of that, if not all of that, is evaluating players, but it's still worth noting.

Bottom line is that I am fully on-board with what Luhnow's doing, but that doesn't mean I don't question some of the decisions made or criticize some of the production the past two seasons. Grossman and Hoes could swing the numbers in Luhnow's favor in the future or they could struggle to handle major league pitching. Both profile as fringy starters at the major league level. I hope they exceed those expectations, but there's a good chance one or both could further drag down Luhnow's history with acquiring outfielders.

Luhnow has certainly acquired some interesting outfield names via trades and the draft, Grossman and Hoes and also Preston Tucker, Andrew Aplin and Leo Heras, but the big outfield names George Springer, Domingo Santana and Teoscar Hernandez were all in the system before Luhnow was named general manager. The outfield depth at the minor league level is a very small issue and could be improved with the most recent draft.

Again, I fully believe in Luhnow and what he and the rest of the front office are doing. Maybe the plan is to acquire outfielders via free agency or move failed infielders to the outfield eventually or even acquire outfielders via depth from other areas or maybe it's just been crappy luck. Time will certainly tell and I am a believer in the overall process, but I do currently have some concerns about the evaluation process Luhnow and the Astros have in place for outfielders.

And here come the buses.