Blackley joins the Rangers' rotation in time to face the Astros and Cosart.

The quicker we all move on from last night's game the better. Lets just jump right into tonight's game.

You did read the pitching matchup correctly, the Astros reliever that was recently designated for assignment is starting for the Rangers tonight. Before we breakdown him as pitcher, I wanted to address one quote he gave the Houston Chronicle.

So it's one of those things; I didn't enjoy that [Minute Maid Park]. But I've thrown [at Rangers Ballpark in Arlington] before, and I'm pretty comfortable here."

Blackley's main problem this season has been the long ball; and yes, nine of his ten home runs allowed this season have come at The Juice Box. But, lets take a look at Blackley's home run chart with Minute Maid Park and The Ballpark at Arlington overlaid on it. 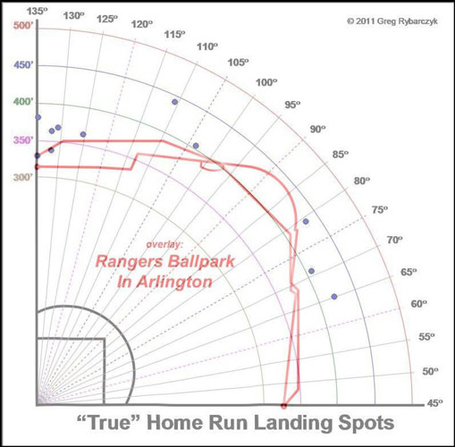 I only count two home runs that would have stayed in the park if not for the Crawford Boxes. I can't blame him for being happy to go from worst to first after being designated. But, I hope he doesn't miss the air conditioning and the mosquito-free environment.

Lets look at the positive, Blackely had allowed only three earned runs over his last nine innings pitched. All three came off a home run. He has a 1-0 record with 0.54 ERA on the road this season. At the moment, he has absurdly high home run-to-fly ball rate at 26.3%, that can only go down from there.

On Thursday, he pitched three scoreless inning in Triple-A Round Rock to work his way back to starting. The Rangers expect 60-70 pitches out of him tonight. In 2012, he made 15 starts for Oakland with a 5-4 record and a 4.54 ERA. This will be the first time he will face any of the current Astros hitters. Right-handed batters are hitting .265 with a .603 slugging percent. Normally I would expect some fireworks tonight; but knowing the Astros, they will make him look like Cy-Young.

On the mound tonight for the Astros is Jarred Cosart, who has continued to dazzle thus far in 2013. He is allowed only five earned runs over 39 innings. In his most recent start, he held Oakland scoreless over six innings - walking one and striking out four. On the road, he has a 0.67 ERA.