The Anatomy of a One-Pitch Strikeout

Share All sharing options for: The Anatomy of a One-Pitch Strikeout

But if you were Vinnie Catricala, you'd know what it's like to be frustrated. A 24-year-old former standout third baseman at the University of Hawaii - Manoa, toiling away in the Texas League hitting .214 and wondering if you're going to have to make good on your business degree. A tenth round pick by the Mariners in 2009, designated for assignment last month and traded to the Oakland A's for cash. Cash, for goodness' sake!

In the top of the fourth inning, you hit a home run to give your team a lead, 4-3, over the host Corpus Christi Hooks. You're the hero.

For an inning and a half, at least.

But then the bottom of the fifth rolls around.

After the first two batters are retired, Max Stassi reaches on a single. Two wild pitches bring him to third base. Your base, if you're Vinnie Catricala. And then, Domingo Santana shoots a grounder your way. You have the chance to get the final out. The ball hits your glove, but you drop it. Twice. You can't make the throw to first, and the tying run scores. Then, a stolen base and a walk later, Jonathan Meyer singles to bring Santana - the guy you let on base - home.

But there's hope. Heading into the top of the sixth inning, you're facing off against Nick Tropeano, the Astros' ~#20 prospect. However, Tropeano is at 94 pitches on the night, and you've already touched him for one home run. So when you step into the box and lay off of what you assume is a slider outside, you feel pretty good. You're up in the count.

Except a funny thing happens. The pitch is called a strike. 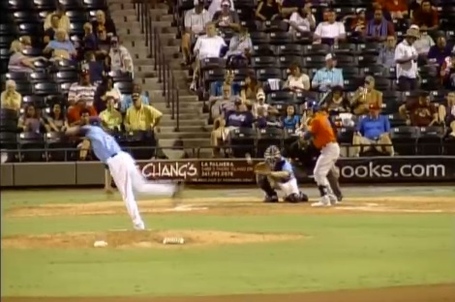 You have an issue with the call, and you may very well have a point. You're tired. You're frustrated, and maybe you argue the call a little longer than necessary. But hey, it's the wrong call, dammit. Right? Right? You must at least make yourself heard. 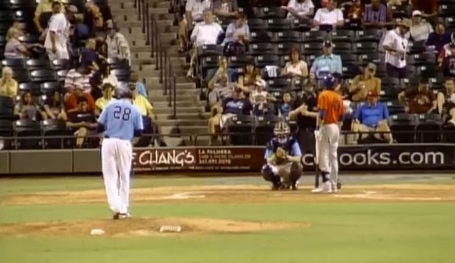 The umpire isn't having it, so you step out of the box, either in protest or to clear your head. You're down no balls, one strike. You remind yourself: I'm Vinnie Catricala, dammit.

Then another funny thing happens. This: 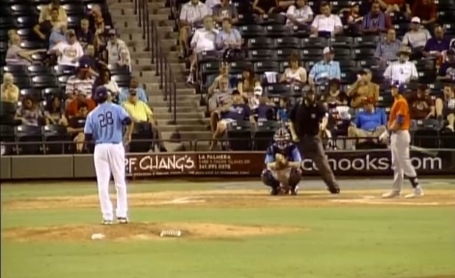 Now, if you're Vinnie Catricala, you've probably never heard of Rule 6.02 (c), even though you're a professional baseball player. Why would you? It's never come up. Rule 6.02 (c) reads:

3.9 seconds after Catricala stepped out of the box, the umpire - Ron Teague, for those keeping score at home - invoked Rule 6.02 (c) and called an automatic strike. When Catricala didn't step back into the box, Teague rang him up. All told, he spent 9.4 seconds outside of the batter's box.

Is that a "reasonable opportunity to take his proper position in the batter’s box"? It's debatable. Ron Teague is a well-respected umpire. He teaches at The Umpire School. It seemed to be a bit of overkill to me, but he's certainly within his rights.

Vinnie Catricala disagreed. He protested his strikeout, and for all of his troubles, Vinnie Catricala was given an early exit from the game. The game in which he worked so hard to get his team ahead, and in which he'd then been responsible for giving away the lead. It had happened in an instant. Less time, even, than it took for him to argue a call, take a step out of the box, and invoke Rule 6.02 (c) not once, but twice.

Baseball's a funny game. It's made up of moments. This particular moment brought together two players going in opposite directions in their career. And in nine point four seconds, Nick Tropeano had struck Vinnie Catricala out with a single pitch.