The Luhnow Process: Developing Astros Outfielders (The Stocky, the Slender, and the Disciplined)

Is Jeff Luhnow and the Astros ultimately looking for Jose Cruz 2.0?

Share All sharing options for: The Luhnow Process: Developing Astros Outfielders (The Stocky, the Slender, and the Disciplined)

An interesting comment showed up on  David Coleman's Tuesday Three Astros Things in regards to the type of outfielders the Astros value through the draft.

Look at Tucker, Aplin, Gulbransen, Ramsay, Phillips, Martin, etc., where we have had more freedom to choose and develop the players.

I instantly began my over-analysis of this sentence as soon as I laid eyes upon it. Those guys listed represent the best of what the Astros are trying to do in drafting and developing outfielders.

As I began my investigation into these guys, I began with draft related scouting reports. When I read into these, I saw this group of six players start to gravitate into two different groups that share one common trait.

Preston Tucker and Dan Gulbransen both get labeled in their scouting reports as having less than ideal baseball body types.

Most think his floor is that of a good bench outfielder/1B in the majors, with a ceiling as an average starter on a second-division team. The source of concern seems to be his body, since he's shorter than prototypical power hitters and heavy for his weight (Note from author: Heavy doesn't mean fat. He's just a big dude for his height. Kind of like how Jose Altuve is short, but built like a tank.)

These bad baseball body types can cause players like this to be undervalued by many other front offices. Another trait that both Dan Gulbransen and Preston Tucker share is a tremendous makeup and/or work ethic.

This quote is from a Florida Gators website that ran an article featuring Preston Tucker.

Tucker’s impressive power numbers have everything to do with his weight room work ethic. Following his sophomore year at Plant, he realized that at 165 pounds those fly balls would only continue to stop at the warning track.

So he became a weight room warrior.

This isn’t just a casual jog on the treadmill and a few reps on the machines. Tucker hit the weights hard. While still in high school he began a workout regimen with a few teammates at the University of Tampa where they would load up with heavy weight and do exercises until their bodies gave out. Then they would slide over to another machine to use the same routine. Twenty squats would be followed by ten reps on the leg press, and then back to the squat rack.

"I realized I wasn’t the biggest kid in the world," Tucker said. "That was when I really dedicated myself to getting bigger."

Since hitting the weights, Tucker has added 50 pounds of muscle in only three years and it has changed the dynamics of his swing. Instead of falling over from swinging so hard, he can now focus on a smooth, consistent swing that lets his bat do the work. The length of his swing generates extra power behind his bat, allowing the strength in his legs to do the rest of the work.

We can pull a similar quote about Dan Gulbransen from the crawfishboxes draft recap that is linked above:

Gulbransen is said to have an "off the charts" work ethic, and scouts seem to think that his excellent makeup may allow him to move up through the minor leagues faster than you would predict from his talent level.

This stocky, short, bad baseball bodied style outfielder once again will be overlooked by many other baseball teams. Luhnow and his office obviously believe that body type has less to do with future baseball success in the outfield than most. There have been plenty of "bad baseball" bodies become good productive major leaguers, and Luhnow and co. believe that production and makeup will overcome being a tad stocky.

The other four outfielders mentioned that were drafted by the Astros are Andrew Aplin, James Ramsay, Brett Phillips, and Jason Martin. All of these outfielders are built in the opposite direction of Dan Gulbransen and Preston Tucker as they range in height from 5-10 to 6-0 with an average weight of 180. Aplin and Ramsay are college guys, while Philips and Martin are high school draft picks, but all four of their scouting profiles reads like nearly the same outfielder. They are all slender, speedy athletes know for tremendous defensive ability.

Aplin has one elite skill in his defensive abilities out in center field. He's got good instincts out there and the skill set to be an asset defensively.

Ramsay's defense is his best tool. A tweet from collegesplits.com:

Correct me if I'm wrong, but that means Ramsay saved 15 runs in center, making him one of the best fielders in college baseball this spring. That's a pretty impressive take on Ramsay's defensive skills.

If you're ranking his skills right now, you start with his arm, which is very good. Then, you talk about his overall defense, which is borne out of his athleticism in the outfield.

The calling card is the speed as it allows for him to be a very good defensive center fielder right now and could be an above average defender there. He has the speed and instincts to cover a lot of ground and his arm is strong enough to play there.

Both the stocky and the slender outfielders discussed above share a common trait: above average to excellent plate discipline. 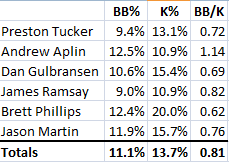 Every batter possess good to elite BB/K ratio which we know is a prized trait in Astros on the farm, and is also an indicator of future MLB success.

What is the potential for these types of outfielders to look like?

I took the BB%, K%, and BB/K along with the average ISO rates plugged them into the fangraphs filters to come up with some MLB players who have profiled similarly from the past to see what type of player we may be looking forward to if these young Astros develop into their full potential.

For the Stocky group, Trot Nixon, Kevin Millar, or Matt Stairs are the best fits to hope for in Preston Tucker and Dan Gublransen's development. All three of the former MLB players had the "stocky, bad baseball bodies" that Tucker and Gulbransen both possess.

For the Slender group, the two historical examples that stand out are Kenny Lofton (I know he's extreme) and Jose Cruz. Both Lofton and Cruz possessed similar builds to our slender group above and both also put up tremendous defensive number through their careers while maintaining an exceptional BB/K ratio.

Obviously, all six of these outfielders above are prospects and the major league names listed above are dealing in absolute ceilings for those players. But, it is nice to see once again where the Astros front office looks for value. Especially considering that none of these players were drafted before the 6th round.