Even during a loss, one family's first Astros game together was a special night of memories made and memories remembered.

When I was little, my parents used to take my sisters and me to the Astrodome to watch the blue and orange Astros play.  We never made it past the seventh inning, and although I'd like to blame that on my sisters, most likely we left early because I got easily bored and couldn't sit still.  I remember the sticky floors, the rainbow colored seats, and the blinding lights overhead that put the catwalks and rafters into stark relief against a ceiling that reminded me of Space Mountain at Disney World.  My favorite players were Cruz, Bass, and Bell, because they had easy names for a seven-year-old to pronounce.  Deshaies and Knepper...not so much.  I don't remember my first ball game, but I do remember that we'd try to make at least one Astros game every season, even though at that point our veins still bled Cincinnati Reds red.

Tonight, my wife Emily and I took our son Mark to his first Astros game.  Mark turned one year old last Wednesday, so the odds of him remembering anything about it are about the same as the Astros' playoff odds.  Nevertheless, it was a special day--a milestone for all of us.  We have the photos to remember the event.  We'll add the tickets to his baby book.  We'll have this game recap saved to our bookmarks.

Mark wore his tent-sized Astros shirt stoically.  More interesting to him than his new duds were the ceiling lights of Minute Maid Park, the jumbotron, and the beer vendor shouting, "Cold beer!  Stop ignoring me, I know you can hear me and I know y'all want some!".  As a side note, if you are taking your infant to Minute Maid Park, section 442 is prime real estate.  It's in the nosebleeds, well beyond the range of even the most well-aimed foul ball, the tickets are comparatively reasonable, and it provides a clear view of the whole park from just up the first baseline.  Sadly, my memories of the evening will include my dismay that Rangers fans outnumbered Astros fans in the park by about three-to-one.

Mark ate peas during the pregame ceremonies.  I'll say that again.  He ate peas.  At a ballpark.  I hate peas.  My parents hate peas.  I have planned genetic testing to make sure he's my son, because of the pea thing.  Despite the green projectiles that periodically hurtled past the nice family in front of us, we made it to the first pitch relatively drama-free.  As the Astros took the field, Mark sat straight up and pointed to them, making sure that Mom and Dad saw the little fellas running on the grass.  Pointing is a new thing for him.  It was cool.

Speaking of which, that family of Rangers fans in front of us traveled all the way to Houston from Fort Worth just to bring their young sons to see their team play.  Sounds like a fun day trip to me, and kudos to them for going to that effort to support their team and entertain their kids.  I discussed early retirement plans with the father.  His sons would be switch-hitters, said he.  I informed him that Mark would be a left-handed starting pitcher.

A couple foot-long hot dogs (dripping in a sauce that professed to be cheese but had the same properties as Elmer's Glue), a bucket of french fries, and a gallon of Diet Coke later, I finally settled into the game.  Starting pitcher Brad Peacock started out nicely, needing only ten pitches to work the first inning.  I pointed this out to Emily, thereby ensuring that Peacock would subsequently run up his pitch count.  Sure enough, Peacock lasted only six innings, with a respectable one earned run and five strikeouts against four walks.

Sometime around the fourth, the stadium organist burst into a basebally rendition of 'Mack the Knife', during a Rangers mound visit.  I love that Minute Maid Park still employs a real-life organist instead of relying entirely on canned recordings -- I feel that the organ is a piece of ambiance that screams "baseball!" in a way few other things can.  But Mack the Knife has special meaning for me; it made Mark's first game even more poignant.  My maternal grandfather was a life-long Reds fan.  He checked the scores every morning in the Enquirer and passed his love of baseball to my mother and her siblings, particularly to my Uncle John, who begged us to name Mark after him.  To this day, my mom can still recite the starting lineup of the 1976 Reds.  My baseball-fanatic grandfather's favorite song in all the world was "Mack the Knife."  I never got the chance to ask him why he felt so attached to a song written about a fictional mass murderer, but I do know that he sang his own words to the tune so as not to regale his children and grandchildren with a story about people bleeding on sidewalks and being thrown into the ocean wearing cement shoes.

I forget the rest.  Anyway, my mom and I danced to "Mack the Knife" at mine and Em's wedding, and so hearing it played live at Mark's first Astros game made me feel like Grandpa was there with us.

For a one-year-old, Mark behaved wonderfully.  When Chris Carter reached the plate in the fourth, I casually mentioned to Emily that Carter had played pretty terribly over the past month, and that he was due for a home run.  On the very next pitch, Carter knocked the cover off the ball, launching it to the far side of the train tracks above the left field boxes as if it wanted to catch the next bus on Crawford Street and just keep going forever.  The Rangers family in front must have thought I was Nostradamus.

I also decided I liked my first view of recently-acquired L.J. Hoes.  His stat line (0-4 with one walk and a run scored) looks ignore-worthy in the box score, but he took twenty-six pitches during his five plate appearances.  That type of patient approach is exactly what the Astros needed to balance out their first-pitch-swinging, non-walking lineup.  I look forward to seeing what kind of player he can develop into.

Peacock left the game after the sixth inning, the Astros leading the Rangers 3-2.  We decided it was pretty close to bed time, and so we left before the bullpen could blow the lead and give Mark the true 2013 Astros experience.

And blow it they did, much to the dismay of Robert Ford and Steve Sparks as they described it to us through the radio speakers in our CR-V.  Kevin Chapman entered the game and gave up a two-run home run to Elvis Andrus, but an error at the beginning of the seventh inning rendered those runs unearned.  Matt Dominguez tied the game on a bases-loaded sacrifice fly in the bottom of the seventh, but Lucas Harrell "bullpenned" the game by allowing two runs (one earned, thanks to a flubbed dive by Barnes in CF that led to a triple) in the eighth and a muffed catch and tag by Jason Castro.  Joe Nathan nailed the game down to notch a save for my fantasy team.  And the Rangers too, I guess.

Despite the game result, tonight was a special night for me, Emily, and Mark.  Every parent should treasure their first trip to the ball park with their kids.  It's a milestone.  The Minute Maid Park staff treated us wonderfully - everybody made a fuss over Mark, held doors for us, and gave us enough cheese on our dogs for at least sixteen people. 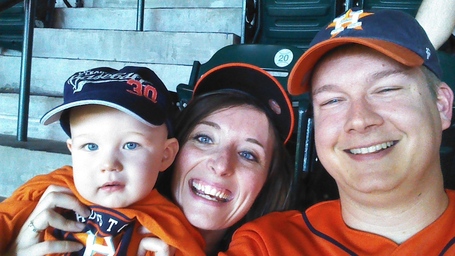