It's a painful topic, but let's talk about what Jose Altuve's trade market really looks like.

I know. This is not an article you want to read. The Astros shouldn't even consider trading the only star player they've developed in the last few years, right?

But, you also know that they WILL consider any and every possibility to make this team better. You know that they're acquiring second basemen like they did catchers last season. They've brought in Tony Kemp. They've already got Delino DeShields, Jr. and possibly Nolan Fontana. They traded for Ronald Torreyes.

If they want to move Altuve, they've certainly got the depth at the position to pull it off. However, that doesn't mean they will pull the trigger. There's a lot of moving parts about Altuve and his midseason swoon this year cannot hurt his trade value (even if I didn't quote an anonymous scout, you'll believe me, right?).

So, let's table discussion on whether the Astros should trade Altuve and look at the landscape of where he might end up for a minute. If none of those options seem attractive, chances are he's not getting move.

Chances are, he's not getting moved no matter what, as you can believe Jeff Luhnow knows the value of his 23-year old All-Star and will maximize it in any trade. Much like Michael Bourn before him, the Astros may value Altuve more than any team is willing to on the trade market.

Let's start this out with a reminder that Jose Altuve is still just 23 years old. What has he done this year?

Altuve is hitting .283/.321/.360 this season with a .295 weighted On-Base Average and a weighted Runs Created total of 85. That's worse across the board than his numbers from last season, when the second baseman broke out and earned an All-Star nod. 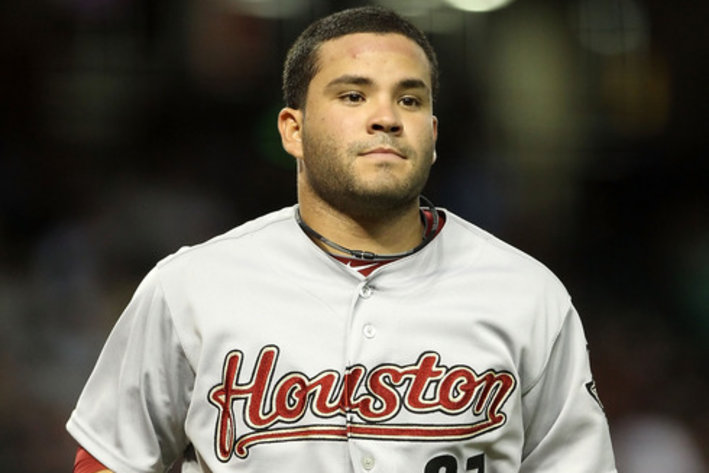 Anthony looked at Altuve's expectations heading into this year

As Astros County figured out in this great piece on Altuve, it's all about contact with him. He's struggling with fastballs, making less contact and swinging more.

Even though the average velocity he's seeing is almost exactly the same, his wFA (Fastball runs above average) is DOWN. In 2012, this was a 10.3. So far in 2013? -3.8. He's actually turned into a below-average fastball hitter. In fact, using these metrics from FanGraphs, Altuve is a below-average hitter on every pitch except the curve, which he has improved from a -0.4 to a 2.0.

The projections bear out his numbers from this season, as they all see him continuing this lowered level of production that has seen his average dip, dip, dip since May 1. If Altuve can find the form that saw him hit .330/.374/.438 in April, he's a valuable trade piece. If he continues to hit for an on-base percentage below .300, he's decidedly less valuable.

The only positive sign from Altuve this season has been his defense. After struggling last season and posting a -13 Fielding Runs, Altuve has improved his defensive numbers quite a bit. His UZR total is much better. He's still got negative Defensive Runs Saved totals for Plays Made, but he's been good in Good FIelding Plays and excellent at turning double plays. That adds up to the improvement and means Altuve has been just slightly below average defensively this season, instead of the "liability" that the defensive metrics suggested he was last year.

But, let's remember that a team trading for Altuve also gets him for many years in the future, as Altuve still has four years of control left after this season. That's incredibly valuable, especially when coupled with his very young age. Any team looking to trade for him is making an investment in not only this year, but the next few years, as Altuve is at least four or five years from his prime seasons still.

That's why he's going to be an attractive chip on the market and why we're talking about him here.

This is where Altuve immediately shoots to the top of the list. The market for second baseman this year is a little thin. MLB Trade Rumors broke down the possible starters who are available at this deadline. The headline name here is probably Rickie Weeks, but that also depends on the Brewers deciding to blow up their core even more than they have.

I'm also skeptical that Daniel Murphy gets moved by the Mets or Gordon Beckham gets moved by the White Sox. Murphy has had success after switching to the position and the Mets may want to hold onto him for that reason. As for Beckham, he's still young and the White Sox might be closer to winning than any of the other teams on this list.

The guy who would easily be the best piece at the position is Chase Utley, who has serious injury questions, but who has also had the best offensive track record. So, if Altuve slotted into this list, he'd probably move close to the top of the class, since he's got good offensive production and is cheaper than many of these guys.

As the MLBTR piece said, two second basemen got moved last season, but not for a ton. Marco Scutaro got traded to the Giants for one minor leaguer while Omar Infante was part of the big Anibal Sanchez deal with Detroit. 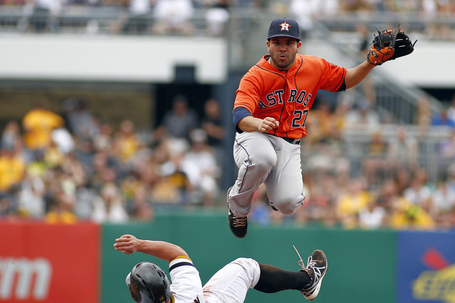 Which teams are most likely to trade for Altuve?

The Nats are 14th in the NL in OPS at the second base position this season. For a team looking at getting into the playoffs, that is unacceptable. However, they also recently promoted Anthony Rendon and plugged him into the spot. He's more than adequate at filling the gap with his bat. But, by acquiring Altuve, they could slide Rendon over to first, where they are 11th in the league in OPS. For more on the Nationals, check out Federal Baseball.

Mmmhmm. This isn't about contending this year. This is about Alex Anthopoulos getting a player he can control for years to shore up a pretty bad position. The Jays are dead last in the majors in fWAR at second base. They've gotten no production out of the position offensively or defensively. Plus, the Jays and the Astros have already worked on one big deal, so you could see them working out another deal pretty easily. For more on the Blue Jays, check out Bluebird Banter.

One thing that Yasiel Puig cannot save is the Dodgers dire setup at second base. LA's second basemen have hit .254/.316/.318 with the worst defensive numbers at the position in the majors. They've got a guy in Mark Ellis who is a free agent after the season. Locking up a young, controllable player could be attractive to the Dodgers. For more on L.A., check out True Blue LA.

The Rockies have been feisty this season. They're contending in the NL West and were parts of the Ricky Nolasco sweepstakes until the end. Colorado also worry about the budget and locking up a player like Altuve for another four cost-controlled years could be very intriguing. The Rockies have gotten the 22nd worst production out of second base this season, hitting .239/.296/.340 at the position this season. For more on the Rockies, check out Purple Row.

Baltimore has gotten middle-of-the-pack production from second base this season, thanks to some sterling defensive numbers from Ryan Flaherty and Alexi Casilla. However, neither of those players have hit a lick, as the O's second basemen have combined to hit .225/.277/.343 this season. Altuve would be an immediate upgrade at that spot, holding the line defensively and hitting much better than that line. He'd also fit in well with that team's young core and could be a big part of their contender for the next few years. In fact, he'd be a little like former Baltimore star second baseman Brian Roberts (who's back but a shell of his former self) with a high average and plenty of speed. For more on the O's, check out Camden Chat.