Revisiting the Lowrie Trade - Why the Astros Won

Fans have made much ado lately about the performance of Chris Carter and Brad Peacock, two of the players returned in the off-season trade that sent Jed Lowrie to Oakland. This post makes the case that the Astros made a smart trade, regardless of wins and losses.

Share All sharing options for: Revisiting the Lowrie Trade - Why the Astros Won

The Astros' current performance has given fans plenty reasons to second-guess, and many fans are already turning against golden child GM Jeff Luhnow after only two seasons on the job. While a reasonable person can certainly understand the ire, a strong argument can be made that judging any one contributor based on the results of such a short period is simply misplaced scapegoating. This goes for Luhnow of course, but also for the ownership group, the on-field management staffs, and for the players themselves.

Lately, many fans have taken exception with Luhnow over the "results" of last offseason's trade that sent SS Jed Lowrie and RHP Fernando Rodriguez to the A's and brought back 1B/LF Chris Carter, C Max Stassi, and RHP Brad Peacock. The reasons are simple: Shortsops are valuable, Carter has trouble with defense, Lowrie has had a fantastic year with the A's, Stassi is injury-prone, and Peacock hasn't shown results that match his pedigree. Arguments refuting these claims include that Lowrie has played over his head this season, Carter's home run power and walk rate make up for the defensive lack, Stassi is an excellent defensive catcher, and that sample sizes have not been large enough to call any of these guys successes or failures anyway.

But let's not go there.

Rather, there are a couple aspects of baseball trades that fans often overlook or discount. First, every fan wants to "win" a trade, and that includes the other team "losing". In reality, trades almost never include established stars changing hands. The expectations of receiving star-level players for an injury-prone, bat-first shortstop are misguided because the days of receiving gold for junk (hi, Jeff Bagwell!) are long-gone with the advent of more informed scouting, sabermetrics, and the internet. Baseball trades do not work like Storage Wars, where one can buy something for pennies and uncover an ancient Etruscan statue worth zillions. Come to think of it, real life storage auctions do not work that way either, but that only underscores the point that what we want to believe of such things does not reflect reality.

Second, fans like to discount the practicalities of return versus investment. What you get back may not be exciting or even good, but it may provide positive value to your organization in the short and long terms. To illustrate this, here are reasonable worst-case and best-case scenarios for the Astros concerning the five players involved with the Lowrie trade.

Worst Case for the Astros: Lowrie continues to rake during 2013 and earns a 4-year, $20 million contract, taking him from age 30 to 33, during which he posts 2 to 3 WAR per season. Fernando Rodriguez comes back from Tommy John Surgery in 2015 and is an excellent reliever, earning him some decent money in arbitration. Carter never reaches above 1 WAR, and is not retained when he hits free agency around 2016. Stassi makes the majors as a backup catcher by age 24, but never does better than 0 WAR. Peacock contributes a bit as a half-WAR middle reliever, but the Astros non-tender him after his first arbitration year because the performance does not match the paycheck.

Best Case for the Astros: Lowrie's 2013 is another example of "contract year" performance, and he regresses back to his injury-prone 1 to 1.5 WAR per season. He still gets the $20 million, since he's a shortstop and just posted the best year of his career, but after that he only secures a $3 million/season contract that takes him through age 36. F-Rod never makes it back from surgery, and is non-tendered before arbitration. Carter reaches 3 WAR in 2014, and makes some bank in arbitration, at which point the Astros let him walk because their prospects are finally ready to take over. Stassi remains an effective backup catcher, so the Astros pay to keep him through his cheap arbitration years. Peacock is a good reliever and spot starter, but the Astros still let him go after his 2nd arbitration year because they have major league-ready options that cost less.

Comparing these two scenarios, one can see that based on return vs. investment, the Astros really cannot lose this trade. From a gross performance standpoint, the possibility exists that the players received do not contribute significantly towards the Astros returning to contention. However, when looked at from the perspective of cost per win, the Astros cannot come out poorly in this trade, no matter which scenario one picks.

In the worst-case scenario, the Astros win fewer games with Carter & All than they would if they kept Lowrie and F-Rod during that same length of time instead, but the cost would have been significantly higher and the cost per win would have been slightly higher. In the best case, the Astros are saving money and adding wins over the long-haul, bringing the cost per win down by over $2 million per win.

The Astros understand that to the fans, the only thing that matters is adding "W's" to the Win column. They also understand that sometimes overpaying for a special player or two, and thus sacrificing their $/Win rate, is necessary to push a contending team into realistic championship consideration. However, the Astros also realize that the club is nowhere near that point right now, and as such, the most reasonable course is to attempt to maximize the reward in terms of both wins and future expense. To a certain extent, the wins are outside of the management team's control, as evidenced by the best and worst case scenarios. They can try to maximize the potential for adding wins (best case) while also being certain that they can control the cost of those wins (both cases).

One final aspect that fans sometime like to disregard: age. Many outlets have done studies exploring the likelihood of increasing or decreasing performance based on players' ages. Please see Fangraph's excellent article on the subject for more details. The article includes this graphic: 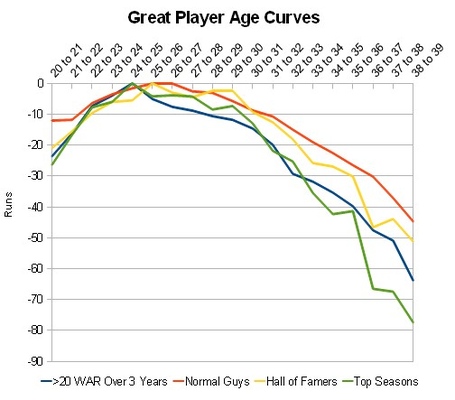 Based on this, one can reasonably expect Lowrie's performance to decline as he ages past 30, making his "best case for the Astros" values more likely than the "worst case". Similarly, the research shows that a reasonable expectation for Carter, Stassi, and Peacock exists where they could improve their performances over the next couple seasons. Nothing is certain, but historical data is in the Astros' favor in this trade, and likelihood of future improvement or decline should be taken into consideration when judging this type of trade.

Fans want wins. So do the Astros. But it's easy for fans to overlook the realities of operating a sports franchise, and those realities include future considerations for cost and performance. Looking objectively at cost and benefit explains why a trade such as the one netting Carter, Peacock, and Stassi shows that even with underwhelming short-term performance, a trade can still be a win for the organization.