With the GCL Astros rained out and Corpus Christi and Greeneville off, it was a light day on the farm, but the teams that played all won... and one of them also lost.

With Delino DeShields, George Springer, and Carlos Correa set for the Futures Game, the Astros have two more players All-Star Game-bound, as Jarred Cosart and Jason Stoffel both were named Pacific Coast League All-Stars. Cosart was one of thirteen All-Stars selected by managers, media members, and online voting. Stoffel, on the other hand, was selected by the PCL office. The game will be broadcast live on MLB Network, the Armed Forces Network, and the Triple-A All-Star Game Radio Network (go figure) at 8:05 central time on July 17.

Did you know that, in fencing, it's called an appel when you stamp your foot on the ground to distract your opponent? The Astros are all set to distract their opponents, with Mark "Kevin" Appel set to make his professional debut this week. MLB.com has a nice article on the relative brevity of Appel's draft-day-to-first-start process, which leads me to the question: When have other recent highly-drafted pitchers taken the mound for their first professional starts? 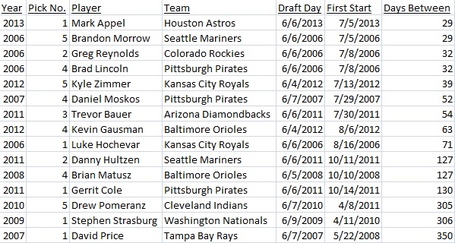 All in all, not bad for someone who some thought would hold the Astros hostage for a few years before absconding with all of their money. Now let's hope the debut goes well.

The Troy Record is giving away ValleyCats tickets - and they've already begun. If you find yourself in the Capital District with nothing to do, drop by and see if you can win. It's unlikely one of their six giveaways will be a Mark Appel start, but one never knows.

Speaking of Troy and Appel...

It seemed odd that Appel will join Jason Castro, Jordan Lyles, and George Springer as the only first round picks to ever play for the ValleyCats, according the this article. Then I realized they weren't including the franchise's history as the Little Falls Mets (NYM 1977-1988), Pittsfield Mets (1989-2000), and Pittsfield Astros (2001.) After all, I clearly remember Preston Wilson almost getting in a fight with someone in the Wahconah Park bleachers in 1993.

I'm not exactly sure why, but I never get tired of hearing about Modern Woodmen Park getting flooded.

Taking A Little Off

In Mike Hauschild's last start, he began to get back to the devastating changeup that helped him decimate Atlantic 10 lineups at the University of Dayton and get drafted in the 33rd round. He had lost confidence in it, but if this article for the QC Times can be believed, he may have found it again. Now, Hauschild was never dominant, even in the Atlantic 10. But this is still a pretty promising step for the young man. Once upon a time, Hauschild's alma mater, Beavercreek High School, was in the same conference as my own alma mater. I don't think that's the case anymore, but it's still good to see a local guy do well.

On Another Personal Note...

I've been dealing with some health and work issues lately, so I've been pretty scarce. Thank you to those of you who noticed and took the time to reach out to me. It was very much appreciated. The rest of the staff, as well as the commenters, really make this an incredible place to be a part of, and I appreciate every one of you. It's good to be back.

Oklahoma City RedHawks (AAA) - Things got off to a rocky start for Asher Wojciechowski, who walked the first three batters he faced and gave up three runs in the top of the first inning to the Albuquerque Isotopes (LAD). But former Astros farmhand Rob Rasmussen got into trouble himself, as the Oklahoma City put up two runs on five hits - and Jonathan Villar's league-leading 28th stolen base - in the bottom of the frame to draw closer. In the bottom of the fifth inning, Brandon Laird doubled home Robbie Grossman to tie the game. George Springer later grounded out to score Villar, and the RedHawks moved ahead 4-3. With a man on third in the ninth inning, Josh Zeid struck out the final batter to earn his eighth save as the RedHawks won, 4-3.

Corpus Christi Hooks (AA) - Corpus had the day off on Tuesday. Instead, read this piece on Jonathan Meyer, who apparently grew up with Matt and Ben Orloff (who knew?). Hey, it's almost as interesting as Ryan McCurdy's mother raising former Seahawks receiver Mike Williams.
Corpus Christi: 5-7, 3rd (1.0 GB) - Texas League South
Lancaster Jethawks (A+) - Tyson Perez did something that no Jethawks pitcher has done this calendar year: Pitched more than five innings. Yes, that's right. Lancaster is moving to a six-man rotation, which has not yet been finalized. Perez held his own, holding the Bakersfield Blaze (CIN) without an earned run, allowing just three hits and one walk, and he got plenty of run support. Plenty of run support. Cameron Lamb and Michael Dimock pitched in relief, not allowing a single baserunner between them as Lancaster walloped the Blaze, 12-1.
Lancaster: 11-2, 1st - California League South
Quad Cities River Bandits (A) - The Clinton LumberKings (SEA) and the Quad Cities River Bandits are close. Really close. Modern Woodmen Park is about 40 miles away from Ashford University Field... or about the distance between Minute Maid Park and Conroe, Texas. As commuter leagues go, they're about as close as two teams can be. So it should be no surprise that Clinton and QC always seem to play each other tough, and this one was no exception, as they traded blows in the first inning. Clinton put up five more runs on Lance McCullers over the next three innings before the River Bandits offense flipped a switch, scoring six unanswered in the final six frames, culminating in a Jordan Scott walkoff groundout to the center fielder in the bottom of the ninth with the bases loaded and one out. Quad Cities wins, 7-6.
If that sounds strange to you, apparently it was even stranger in person. 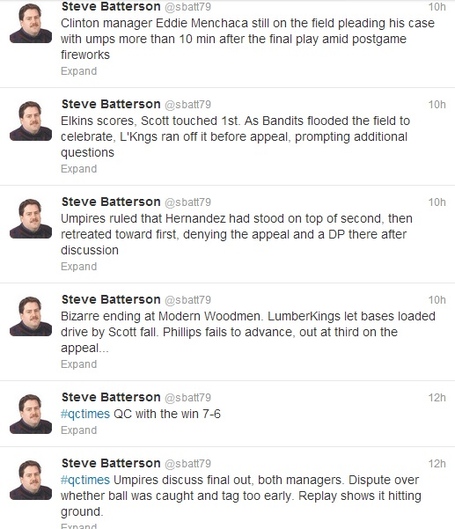 Quad Cities: 9-3, 3rd (2.0 GB) - Midwest League Western
Tri-City ValleyCats (A-) - A doubleheader in Burlington saw B.J. Boyd homer once in each game. The only difference is that in the first game, it was a two-run shot that led the Lake Monsters (OAK) to a 2-1 victory over the ValleyCats. After a Chan Moon error put the first Vermont batter of the game on base, Boyd quickly sent him back to the dugout with a mammoth shot to right field off of Kyle Westwood. Westwood pitched well the rest of the way, but the Tri-City offense couldn't pick him up as they lost game one.
In game two, Boyd's homer was only a solo shot, and while the Tri-City offense still had some trouble getting things going, they scraped out a victory, 2-1, to split the twinbill.
Tri-City: 12-4, 1st - New York-Penn League Stedler
GCL Astros (Rk) - The GCL Astros, once again, were rained out against the GCL Phillies (PHI). A pair of doubleheaders are in the works for July 17 & 18.
GCL Astros - 5-3, 1st - Gulf Coast League Northeast
Greeneville Astros (Rk) - Tuesday was a scheduled day off for Greeneville after the doubleheader on Monday. They're back in action today.
Greeneville: 7-5, 2nd (3.0 GB) - Appalachian League West
DSL Astros (Rk) - The DSL Astros were in action against the DSL Athletics (OAK). After the A's grabbed a one-run lead in the bottom of the first, the Astros' pitching shut them down and the offense scored four unanswered, highlighted by a three-run top of the seventh inning, after which the Athletics didn't bat, as the game was called for rain. Doesn't exactly seem fair, but the Astros will take the 4-1 victory.
DSL Astros: 17-10, 2nd (2.0 GB) - Dominican Summer League Boca Chica Northwest