Jose Veras trade: Who will be Houston's next closer? Who takes Veras' roster spot?

Now that Houston has traded its de facto closer, who will take Jose Veras' place in the bullpen?

Share All sharing options for: Jose Veras trade: Who will be Houston's next closer? Who takes Veras' roster spot?

Yes, the Astros just traded away their best reliever.

Abandon hope, all ye Astros starters who take a lead late into a game.

Well, possibly not. But, Houston does have a couple questions to answer after the Veras trade went down this morning. Let's split them up and deal with them separately. First things first, who takes Veras' spot on Houston's roster?

Right now, there are probably three good candidates for that. They are:

Acquired from the San Francisco Giants for Jeff Keppinger, Stoffel has slowly risen through the ranks of the Astros farm system. In 44 innings this season for Triple-A Oklahoma City, Stoffel is 4-1 with 36 strikeouts and 21 walks. He's got a 2.22 ERA and a 3.07 FIP. His K rate isn't as good as in previous seasons, but it's still respectable.

Acquired as part of the Hunter Pence trade with Philadelphia, Josh Zeid could be the second prospect from that deal to debut with Houston this year. Zeid has a wipeout slider that has led to some silly K rates in the minors. This year at Triple-A, he's striking out 10.92 per nine innings with a 4-1 record and 13 saves in 43 games. He's got a pretty solid 3.50 ERA and a 3.52 FIP, largely due to a huge number of walks that are over his career averages.

Signed out of Taiwan, Lo was once a highly regarded prospect in Houston's thin system. But, injuries have held him back for three seasons now and diminished his star a bit. This season, he's back and pitching well in Double-A, throwing seven innings with no walks and 7.04 K/9 with a 3.52 ERA and 3.33 FIP.

Of those, Lo may be the most likely possibility, as he's already on the 40-man roster and has been pitching well of late.

I wouldn't be surprised if Chia-Jen Lo is the RP who is promoted. He's been scoreless over his last seven appearances with 0 walks. #Astros

Any of the three could be added, though, as Houston has open 40-man roster spots currently.Any of those three would help out a beleaguered bullpen, but I'd be shocked if any of those three were promoted and also named the team's new closer. So, who gets that honorary title?

Let's first look at leverage index. Over at FanGraphs, we can check out Houston's relievers this season and see which ones have been used in the highest leverage situations so far.

Seventeen different relievers, but not many of them have been great. Only three of Houston's relievers have positive totals in Win Probability Added per Leverage Index, which is basically context neutral wins. It shows how well a reliever has performed regardless of leverage situation.

In that measure, Jose Cisnero comes out on top. He's the only reliever left in the bullpen who has performed at an average level by WPA/LI standards.

But, that's not the only measure on that leaderboard. The next one beside WPA/LI is Clutch. That attempts to take how a player performs and see how better or worse they do in high leverage situations than he would have done in context neutral environments.

To this measure, though, the most clutch pitcher in Houston's bullpen has been Travis Blackley, the Aussie Boomerang (I'm still working on the nickname). This season, Blackley has been somewhere between above average and great, by that metric. 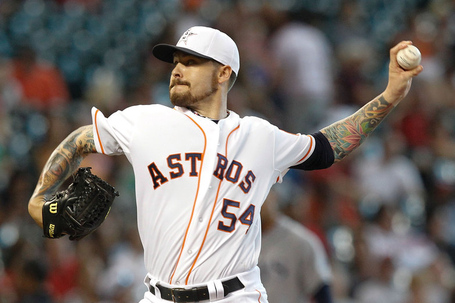 But, there is yet a third measure out there. The last two columns on the list are for Shutdowns and Meltdowns, or how often a reliever defuses situations in games or causes them to get worse. Houston's remaining leader in Shutdowns right is Hector Ambriz with 12, but Blackley follows closely with 10 and Cisnero is third with seven. Ambriz also has a team-leading 10 meltdowns so far and Cisnero has the third-most with seven (Wesley Wright is tied with Ambriz with 10).

Given all that, who can we expect to be the closer moving forward?

Well, I went into this numbers-crunch thinking it will be Jose Cisnero. Bo Porter made numerous comments earlier this season to that effect, that if Veras got moved, Cisnero was being groomed for the job. However, after looking at this, Travis Blackley makes a lot of sense. He's been effective without melting down, he has been very good at being "clutch" and has provided solid value when in the game.

However, K rate is also very important here and Cisnero has a substantial lead on Blackley there. That's why I'd guess Cisnero is the closer, with Blackley moved into an eighth inning role.