Jeff Luhnow is building a pretty good track record at creating value in the bullpen and then landing talented players for them.

Though he hasn't even been on the job three years, Astros general manager Jeff Luhnow has now traded four different closers. He's received eight players in return and flipped one of those eight for three more. That means he's parlayed his closers into 11 players, including seven starting pitchers, the team leader in home runs, a hot-hitting catcher in Double-A, a young, toolsy outfielder and an unknown.

That's a pretty good haul, considering the Tigers could have had Jose Veras for free just seven months ago. Well, not free, but for about the same amount of money they're paying El Papa Grande, Jose Valverde.

This is a pretty nifty trick Luhnow and his team are pulling off. Veras almost certainly would not have brought Milwaukee Detroit's second-best hitting prospect in return last year. But, sliding him into that magic closer's role seems to make a ton of difference. He's now got some cache as a late-inning stopper, even though he's essentially been the same pitcher he was last season, only in a slightly higher leverage role. 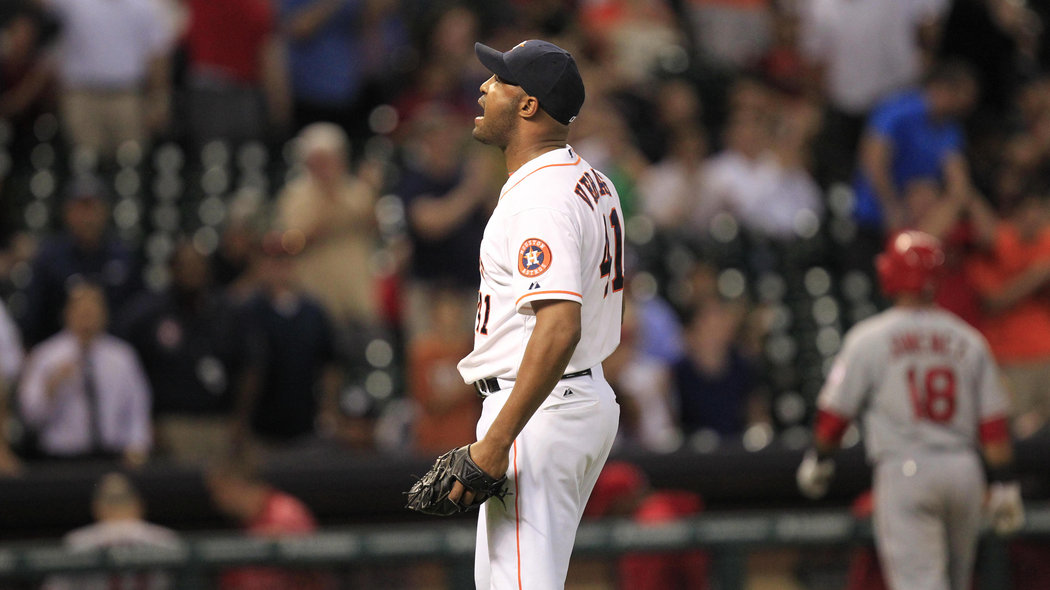 Tim had Detroit fourth, but they were on the list. That's pretty good.

In fact, Jose Veras may have gone from one of Luhnow's shakier offseason moves to one of his best.

Think about how we viewed Veras six months ago. He was a decent reliever with a good strikeout rate but terrible control. Visions of bullpen implosions in the ninth inning danced through our traumatized heads. But, that's not how it worked. Veras pitched very well as Houston's closer, racking up 20 shutdowns to four meltdowns in a little over half a season as the closer.

That gave him his value and it landed Houston another young, intriguing player. We'll have more of a profile on him later today, but at first blush, Danry Vazquez reminds me a lot of Domingo Santana. Young guy, some questions, power potential but still a little raw.

In other words, he got some solid value (plus a wild card in the player to be named) for a pitcher he basically created value for. That's exactly what Oakland did under Billy Beane for years, and really, is still how Oakland operates. The A's don't trade away a closer every year like Luhnow does, but they have flipped plenty of bullpen arms for more value in the past decade.

As the Astros struggle to get even to a .400 winning percentage, a closer isn't all that important. Sure, they need as much bullpen help as any team right now, but in the scheme of things, that outfielder is going to help the system much more than Jose Veras will help Houston in five years. The Astros recognize that and capitalized on value.