A look at how the K:BB ratio works out for the pitchers down on the Astros farm system.

In my last article, we looked at the strikeout to walk ratios for each minor league team in the Astros affiliates and how the compare to their respective leagues. That article also ended up being used on CSN Houston's broadcast to once again help the small percentage able to watch the broadcast get excited about the future. So CSN Houston, I do not mind if you use this article also, maybe just throw out my twitter handle @sethdrennan (that is the end of my shameless self promotion)

The data included in these tables will be PitchAge (the average age of the pitchers used), BB/9, SO/9, and SO/BB. 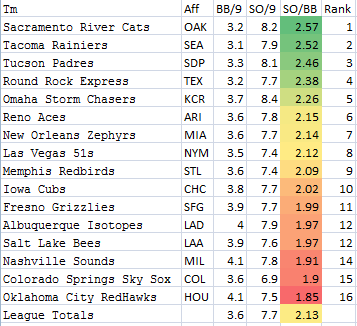 I did not include "PitchAge" on this table because of the nature of AAA. Once again, I just included this to see where the Redhawks rank in this department, dead last. They have the highest walk rate in the PCL. Not to worry though, Jarred Cosart was the only "prospect" pitching for the OKC Redhawks. At least half of the staff are retread types like Wade Leblanc, Philip Humber, etc.

The needle begins to move in the right direction with the Hooks. The rotation is a mix of guys like Mike Foltynewicz (high strikeouts and high walks) and David Martinez (low strikeouts and low walks). Check out the Springfield Cardinals with a ridiculous SO:BB ratio. Guess who drafted nearly every one of those pitchers (Hint: he's our GM). 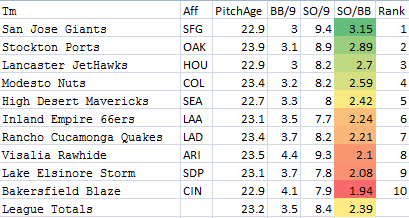 The pitchers have a tougher assignment than the hitters in Lancaster, but you can see the effect of the SO:BB ratio starting to take its effect with the Jethawk pitchers. Brady Rodgers and Aaron West have sterling SO:BB ratios as pointed out in this Astros County article. Aaron West's SO:BB ratio is 5.77. His ERA, however, is 5.33. Another reason to keep in mind that ERA in Lancaster is just as worthless as a pitcher's record. #killthewin 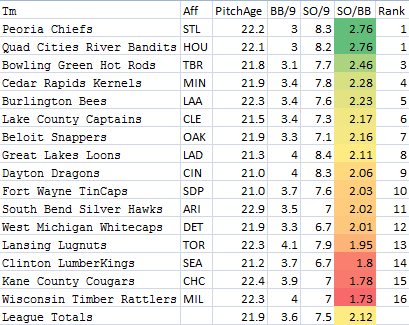 And... Here. We. Go. Quad Cities pitchers are sitting at the top of their league tied with the St. Louis affiliate, the Peoria Chiefs. This is becoming a trend. Jordan Jankowski, Mike Hauschild, and the TCB favorite, Vincent Velasquez lead the way for the River Bandits in this department. 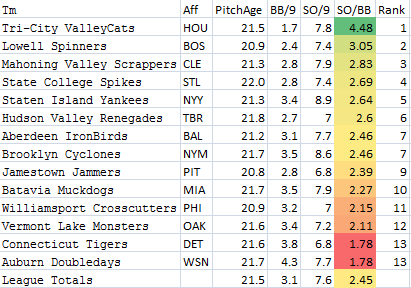 The Tri-City ValleyCats set the bar in the Astros organization with a ridiculous SO:BB ratio. Michael Feliz is sporting a 6.33 SO:BB at the ripe age of 20. 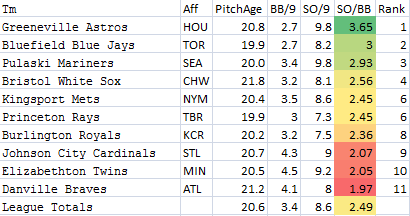 The G-Stros continue the trend. They borderline dominate their league in this department.

Keeping in line with my last article, I am not going to include the GCL and DSL stats. These leagues are so raw that the stats really may not paint a picture.

Ultimate Conclusion about Jeff Luhnow and the SO:BB Ratio

Market inefficiency. This was the buzz phrase created by Billy Beane and the book "Money Ball." You find something that other people undervalue and capitalize on it.

It seems that Luhnow and his staff take the opposite approach from a lot of clubhouses. Instead of drafting tons of hitters with raw power to develop their approach, they draft hitters with a polished approach hoping to develop power. On the other side, they draft pitchers who already have the control and/or command in hopes that they will gain velocity, instead of drafting the fire ballers hoping that they will develop control.

It's an innovative approach that I think is taking advantage of a market inefficiency. It is safe to say that the SO:BB ratio plays a big role in their scouting and development, and that is a good reason to be excited about the future.