I came across two interesting charts this week, both via MLBfarm.com. The first, shows the Astros minor leaguers lead all other teams in walks, by a pretty large margin (HI, NOLAN FONTANA!). The second shows Astros minor league pitchers issue the fifth least amount free passes. 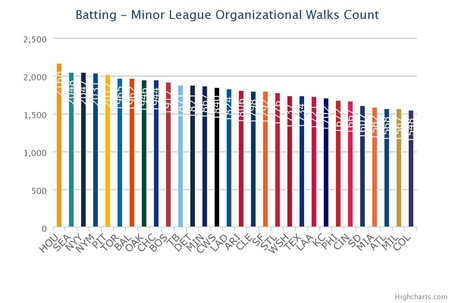 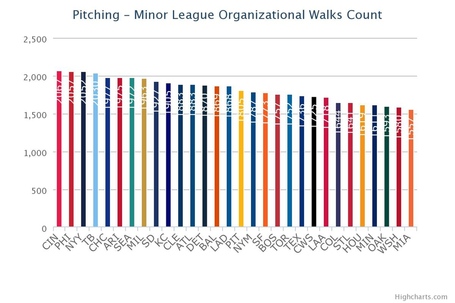 Let's get into Wednesday night's games, where the Astros affiliates went 7-0, improving their MiLB-best winning percentage. DISCLAIMER: You might want to put on your sunglasses before reading any further. The future is pretty damn bright, bros.

After George Springer's first few games on Oklahoma City, it looked like he was going to literally hit 100 home runs. Predictably, he's regressed back to the mean, and unfortunately, the strikeouts are back. Over his last 10 games, he's struck out 15 times, while walking only twice. That said, there's nothing Springer can do over the next month-ish that will make me change my mind on him being a September call-up. Striking out is always going to be a part of his game. Once September rolls around, it's time to see him do it in the Majors. The power/speed combo, along with his stellar defense in CF, and great intangibles, will be more than enough to make up for a few – actually, a lot – of swings and misses.

Known mostly for his defense, Max Stassi has been touching more bases than Derek Jeter at an ESPYs after party lately. The Kevin Goldstein favorite and often-forgotten piece in the Jed Lowrie trade has lauched six home runs in his last eight games. His current slash line of .259/.326/.503 at CC is a promising sign for his chances of being a productive Major Leaguer, because of his defense. Him, combined with Peacock and Carter ... does anyone still think the Astros "lost" that Jed Lowrie trade? Didn't think so.

Although he apparently felt like he was getting squeezed ...

Mike Foltynewicz twice walked off the mound after two-strike, two-out pitches ... and both were called balls.

Mike Foltynewicz had one of his best outings of the season. Eight innings is really nice to see, along with two walks and a bunch of groundouts. Oh, by the way, his eighth and final strikeout of the evening ... came on a 100-MPH fastball. I sometimes dream of a future rotation consisting of Carlos Rodon, Mark Appel, Mike Foltynewicz, Lance McCullers and Jarred Cosart. My god. Hose. Me. Down. Please.

Worried about Travis Ballew's inflating ERA? Don't be. His advanced metrics are still good. He was one of Mike Fast's sleeper prospects coming into the season, and he's one of the most interesting Astros MiLB tweeters on my timeline. The following tweet, in particular, I really enjoyed:

I literally hate gnats so much

How big are Neil Diamonds ears?!?!

I can't wait to see what Ballew does when he gets out of the Lancaster launching pad. I have faith he can be an effective bullpen piece for the Astros some day. But seriously HOW BIG ARE NEIL DIAMONDS EARS?!

After a torrid 30ish game stretch Carlos Correa has slowed down significantly. Him and McCullers both appear to be fighting through the grind of their first full professional season.

McCullers had a "meh" start Wednesday night. During the month of July hitters have been consistently making solid contact with the baseball – something they failed to do during the first three months of the season. After hovering around 17% all season, McCullers LD% has jumped to the mid-20s in July, and his HR rate has also sky-rocketed.

Comprised of mostly 2013 draft picks, Tri-City's roster continues to intrigue me. First, you have my personal favorite, Tony Kemp, who will occasionally make superhuman plays like this:

Then you have fellow Commodore, Conrad Gregor, and his impressive plate discipline. There's also James Ramsay, who's known for his phenomenal defense in centerfield, putting up a serviceable .297/.381/.369 slash line.

On the bump, two of the most interesting guys both pitched this evening, Chris Cotton and JD Osbourne. Both are a little too old for the League, so take their stats with a grain of salt.

Cotton lowered his ERA to 0.51 on the season, but also issued his first walk of his professional career. FIRST WALK. While every team is looking for the sexy prospect with electric stuff, and high strikeout numbers, finding value in pitchers with good control seems like a strategy Luhnow and company have adopted.

JD Osbourne has yet to give up a run between Greenville and Tri-City this season. Not only is he striking out 14/9, but his 2.14 GO/AO ratio indicates weak contact, on the rare occasion an opposing batter actually makes contact. To give you an idea of how dominant Osbourne has been, he's recorded 50 outs this season – 43 have either been by strikeout or groundout.

Greenville has now won 12 games in a row, and tonight they did so in dramatic fashion. Undrafted free agent, Jack Mayfield, provided the heroics in extra innings. His reward? A pie in the face:

My boy @jackmayfield8 with the walk off BOMB in the 13th to push the winning streak to 12!! #Gstros #shavingcream pic.twitter.com/ikbIvVQou5

Making his second rehab appearance in the GCL, 2012 13th round pick, Brian Holmes dominated once again. He's pitched 6 IP in the GCL, allowing only one hit, while issuing zero walks and striking out nine. He's almost ready to move back to QC. Like Ballew, you may remember Mike Fast pimping Holmes on a TCB thread, as a potential sleeper heading into 2013.

Luis Payano hit a walk-off HR to win the game. Mr. Oz Ocampo points out that the DSL Astros lead the league in ERA, and drops three names to keep an eye on: Elieser Hernandez, Junior Garcia and Joselo Pinales. Meanwhile, Jayne, from WTHB, has a nice breakdown of the 2013 DSL Astros.