The Astros' Bullpen have allowed Home Runs at an alarming rate. How does it compare to the league?

Just after I made the decision to hit the hay on Tuesday night, I saw this tweet by Adam Wexler, who co-hosts the morning show on Houston Sports 790:

Heading into tonight, no bullpen in baseball had allowed more than 39 HR...well except for the #Astros. Cisnero just gave up their 60th.

Thinking that Wexler had made a joke, I laughed and re-tweeted. Then, I cracked open a box of statistics and learned the ugly truth. I viewed the table below, which prompted me to delay my sleep plans and write this article.

No words exist in the English dictionary to express my disgust over the Astros' bullpen tater tendencies. This season, Astros relief pitchers have allowed more than twice as many home runs as the MLB average relief corps. I'll risk being redundantly repetitive by elaborating. For every home run the average MLB club allows after the starter hits the showers, the Astros give up two. For every five that Joe Average Bullpen serves up, the Astros yield ten. For every 100, the Astros ... you get the idea.

Since 1990, the 1996 Detroit Tigers relief corps allowed the most home runs during any one season. That bullpen served up souvenirs to 88 lucky outfield fans. The Astros find themselves at two-thirds of that mark on July 23rd, and if they match the '96 Tigers' 567 innings, their pace would result in 103 homers allowed by season's end.

During the same 23 year sample, bullpens allowed an average of 49 Home Runs per season. The Astros have eleven more than that with two months of 2013 yet to complete.

So who has been most responsible?

The answer: All of them. Well, almost all of them. Lucas Harrell and Xavier Cedeno have not allowed a homer in the relief role, and of the pitchers who have issued a round-trip ticket, only Jose Cisnero ranks better than league average at limiting moon shots.

In the chart below, IP = Innings Pitched and TBF = Total Batters Faced. 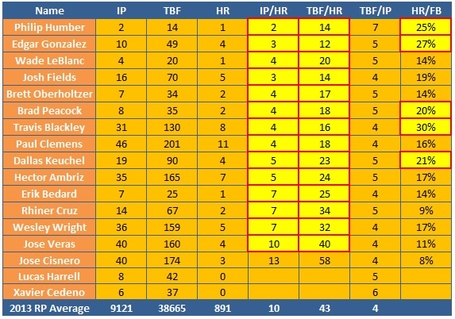 A few guys make interesting cases, such as Paul Clemens. He leads the Astros with forty six relief innings pitched, and he's allowed a home run every four innings. Compare that to one every ten for league average. Despite this, his HR/FB rate is a comparatively low 16%, or almost half of Travis Blackley's. Note that his HR/FB is only low compared to other Astros relievers. The AL League Average HR/FB this season is 10%. The Astros' bullpen is 16%.

While Clemens' HR/FB ranks among the best in the bullpen, his IP/HR and TBF/HR show that he must be allowing a huge number of fly balls. In fact, his FB% is awfully close to 50%, which is scary for a right-handed pitcher in a park that has a small left field. A pitcher's ability to limit Home Runs cannot be judged on HR/FB alone, which makes it an imperfect measurement of HR prevention. A ground ball pitcher can actually be successful at limiting home runs but still have a high HR/FB rate. Likewise, a fly ball pitcher can have a great HR/FB, but be serving up a home run every couple games.

Since 1990, bullpens allowed an average of 49 Home Runs per season. The Astros' has given up 60 with two months remaining.

Compare the Astros' Home Run rates against the league averages and you will see why the Astros struggle in late innings and in close games.

Thanks to @awexler for giving me the idea for this post, and to Fangraphs for such excellent statistical resources, and to Microsoft for allowing me to create graphs in Astros' colors. Can you count the number of different clichés used to describe a Home Run in this article?