His first was maybe the best debut by an Astros pitcher ever. What should fans expect from him Tuesday?

Cosart is finally back up with the big league team and ready to face the dreaded Oakland Athletics. So, in preparation for that, let's run through what Astros fans can expect from the youngster in his second career start.

I mean, besides an 18-inning perfect game that he ends with a home run.

The A's won't be able to load up on lefties against the right-handed Cosart. They might start John Jaso at catcher for Derek Norris and they could put in Eric Sogard for Grant Green, but both are backups at their position.

As it is, Cosart figures to see Coco Crisp, Jed Lowrie, Josh Reddick and Seth Smith from the left side, since both Crisp and Lowrie are switch hitters.

The change that seems most likely is Brandon Moss playing first base instead of Nate Freiman, who started on Monday against the lefty Keuchel.

I changed my mind. It seems like Oakland could very easily have six to seven left-handers in the lineup on Tuesday. Not great for Cosart.

Oh, and it seems that Yoenis Cespedes, who has missed time with a minor injury, could be back in the lineup Tuesday, which is not great news for Cosart. 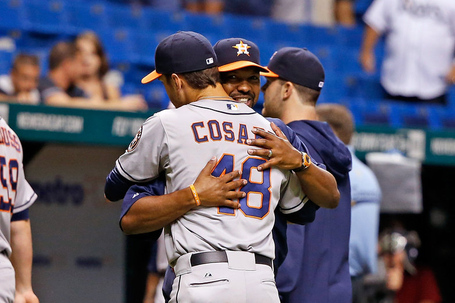 We know what Cosart threw in his major league debut. Oh, wait, you don't remember? Here's the data from Brooks Baseball to refresh your memory:

Mostly fastballs, with some cutters and a heavy four-seamer dominated his repertoire. He also worked in some curves and threw a very few sliders.

How do the A's profile? They've been a pretty good fastball hitting team this year, coming in at No. 16 in the league in weighted runs on fastballs, per FanGraphs. They've struggled with sliders big time, but have been a top five team against cutters, curveballs and changes.

Okay, okay. Maybe we can look at recent trends in the A's hitting to answer more questions on what to expect. This is actually good news. The A's have struggled mightily at the plate in the past 30 days. For that stretch, Oakland is hitting .226/.293/.348. The only team hitting worse than Oakland in the past month? Your Houston Astros.

If you're looking for good signs for Cosart, start right there. Just ignore the other stuff.