On the Astros: Front office still human, suffering right along with fans

It's hard to follow the Astros, but just imagine if it was your job to put this team together? Rough.

Share All sharing options for: On the Astros: Front office still human, suffering right along with fans

Hold on to your horses, I'm about to drop some knowledge on ya. Big, gold-plated kernels of truth. Right here.

It's hard to be an Astros fan right now.

Yes, there's the minor leagues to focus on. Yes, you should get excited about seeing Jarred Cosart, Jonathan Villar and soon, George Springer. But right now? It kinda sucks.

Now, we talk a lot about the Astros front office around these parts. Occasionally, we are graced wit the presence of a few of them, for which we are always thankful. We get to interact with guys like Kevin Goldstein and Jeff Luhnow on Twitter. They're about as accessible a front office (in parts) as there is in baseball.

That doesn't stop us from thinking of them as robots at times. We talk about this rebuilding plan as fans and it seems hard. Waiting for prospects. Holding the line. Only spending when the team is ready to contend.

The best front offices are able to make these decisions objectively. They cut out emotion or subjectiveness and make the best move for the future of the club. But, man, that must be hard. 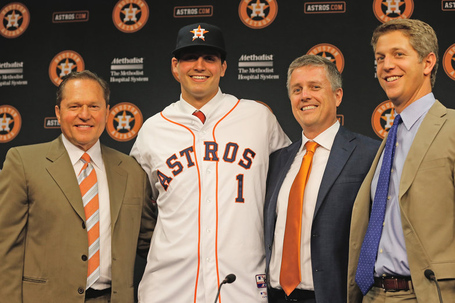 Let me give you an example. This weekend, Houston was terrible. The Seattle Mariners, one of the 10 worst teams in the game, beat them up and down the field. They beat Houston's best starter. They beat Houston with only one hit. They torched the young phenom for seven runs on Sunday.

Tim was still mad about it hours later when we did the podcast...and HE'S A FAN!

Now, imagine if it's your job for this team to do well. Imagine if you put this team together, stitched this roster up and saw the potential therein. After a series like that, coming so soon after a break should have let all those bad vibes out the door, what reaction should Jeff Luhnow and his fellow baseball operations folks have?

I'd be fascinated to know how Kevin, Jeff, Mike or any of the others are dealing with the losses. Is it getting to them? How do they deal with the stress of the losses?

It's easy to say the moves to jettison Carlos Pena and Ronny Cedeno were impulsive. That the front office was just reacting. Maybe it was. I can't see Luhnow taking a bat to the clubhouse like Brad Pitt/Billy Beane did that one time, but I CAN imagine the frustration is mounting.

This isn't 2012. They're not in their first year on the job. This is Year 2 of The Plan. Things are supposed to be improving, not staying in place.

They may not be so calm in a few years, if the results don't change. But, now, it seems this team is manned by a bunch of robots. Considering the task ahead of them, that's a good thing. They need to stay the course and not trade Wil Myers for James Shields or sign Ryan Howard to a massive contract.

But, I'd be fascinated to know how Kevin, Jeff, Mike or any of the others are dealing with the losses. Is it getting to them? How do they deal with the stress of the losses? I'd welcome any comments to that end from them, but I also understand if they want to keep that buttoned down. Appearances are everything, after all.

It's something to keep in mind, though, as we watch the moves over the next few months and years. Hopefully, it gets a lot easier for us and them over that time.