Where might Houston's near-no-hit lefty end up at this trade deadline?

This summer, Bud Norris and José Veras have garnered most of the trade rumors involving Astros pitchers. However, Erik Bedard, who on Saturday threw six and one-third hitless innings, has demonstrated some value as well. Having already pitched 98 innings, he is primed to boast his highest total since 2007. Over 18 starts and two relief appearances, he has maintained a strong K/9 stat of 8.17. With an ERA of 4.41, the southpaw has been a reasonably stable pitcher, better than the fifth starters of some contending teams.

Once upon a time, Bedard was pitching out of the bullpen like Houston had a tandem starter system.

Bedard is also 34 years old, so it makes sense for the Astros to trade him. He is owed less than half of a one-year, $1.15 million contract, so even the thriftiest suitors can handle his salary. Of course, the lefty would not attract a package of blue-chip prospects, but we shouldn't put it pass Jeff Luhnow to bargain for a low-risk, high-reward player(s). Even if the Astros receive a minimal return, by trading Bedard they will have freed up several starts between July 31st and the end of the season, starts they can use to evaluate Brad Peacock, Asher Wojciechowski, or another young arm. The following teams could fill a need by acquiring the southpaw, and each would have a player or two to send in return.

If the Jays hold onto their wafer-thin playoff chances but don't want to risk much to increase those chances, they should pursue Bedard. They could slide him into a rotation that is missing lefties J.A. Happ (60-day DL) and Ricky Romero (demoted to AAA). He could serve as a poor man's Mark Buerhle; he'll surrender some runs, but few enough to keep Toronto's strong offense in the game.

Aside from Bedard's immediate value, I recommend him for the Jays because, if they re-sign him, he can contribute next year as well. As Rany Jazayerli has suggested in Grantland, it might be best for Toronto to accept this year's failures and reboot for 2014, given that its only notable free agent this winter is Josh Johnson. By acquiring Bedard now, the team would improve its current rotation while also courting the southpaw for next year, when he could serve as a fifth starter, long reliever/spot starter, or even a lefty specialist. Not terrible for $1-2 million a year.

This recommendation boils down to Roberto Hernandez, whom the Rays have given 18 starts this year. The Artist Formerly Known As Fausto Carmona has responded by posting an ERA of 4.90, which hasn't been inflated by an absurd batting average on balls in play (.304). His tendency to leave pitches in the middle of the strike-zone has resulted in a HR/FB clip of 21.2%, a number made worse by the fact that he pitches his home games at Tropicana Field.

In the same number of starts, Bedard has maintained better or comparable stats while pitching about half his innings at Minute Maid Park, where he's held a 2.79 ERA. Tampa Bay is within striking distance of Boston in the AL East, and a better fifth starter could help make the difference between a wild card berth and a division title. That starter, of course, could be the young Chris Archer, but the Rays might prefer a veteran such as Bedard. 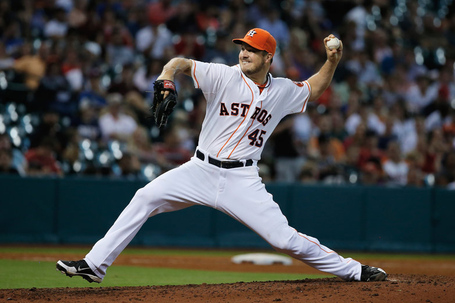 The Giants stand on the edge of contention in a weakened NL West. Though many have whispered about them moving veterans, a few savvy, low-cost additions could push the defending champions back into the race.

San Francisco's first order of business is its pitching staff. The team has relied on inconsistent performances by Barry Zito and Tim Lincecum, whose recent no-hitter should not obscure his declining skills. These struggles compound those of Matt Cain and the injured Ryan Vogelsong. San Francisco has few prospects to exchange for top-tier arms and, at least for now, is locked into some large contracts. Bedard would command neither much money nor star minor leaguers, and he could help shore up the back of the Giants' rotation.

The Indians' starters have pitched well enough to keep the team close to the first-place Tigers. Nevertheless, one senses that things could derail quickly. Will Scott Kazmir continue his renaissance through September? Can Ubaldo Jimenez eat more innings while keeping his ERA around 4.50? Will Zach McAllister return from the DL at full health? Prospect Danny Salazar shined in his big-league debut, but should the Tribe toss him into a pennant race? Worse yet, internal options Carlos Carrasco, Trevor Bauer, and Brett Myers have combined for 13 starts and a 7.47 ERA.

This is not to say that Bedard would cement a division title for the Indians. But it's doubtful that Cleveland, with its limited payroll and farm system, will land a front-of-the-rotation arm. Therefore, the team may instead decide to add an inexpensive, serviceable starter. Bedard would fit the bill.

Amazingly, the .500-ish Rockies have remained in the thick of the NL West race. Starters Jorge de la Rosa, Jhoulys Chacin, and Tyler Chatwood have helped keep the team afloat. Juan Nicasio has even produced a WAR of about 1. The team's auditions for a fifth starter, however, have gone badly. Before Colorado released him in June, Jon Garland struck out only four hitters per nine innings, in part due to a fastball averaging 87 MPH. The team took a low-risk chance on Roy Oswalt, who completed only 17 innings over four starts before injuring his hamstring. Colorado even let Jeff Francis start 11 games, enough for him to rack up a 6.58 ERA.

The Rockies have a largely productive rotation, but, like the Rays, they've also suffered from a poor starter every fifth day. If Bedard only pitches better than Garland, Oswalt, and Francis, he'd be worth a trade.

(All stats are courtesy of fangraphs.com and are current as of July 21st.)