On the Astros: The Luhnow Process, strikeout to walk ratio

Share All sharing options for: On the Astros: The Luhnow Process, strikeout to walk ratio

We know Jeff Luhnow has a process. It's written in the 20 plus page report (speaking of, if the Astros ever were strapped for cash, I'm sure he could sell this report for $100/pop and the TCB'ers plus other blogospheres would raise a nice chunk of change). We know that Astros analysts like Mike Fast look at data that would probably make our heads explode. This piece is going to focus on a much less complex piece of data, the Strikeout to Walk ratio. 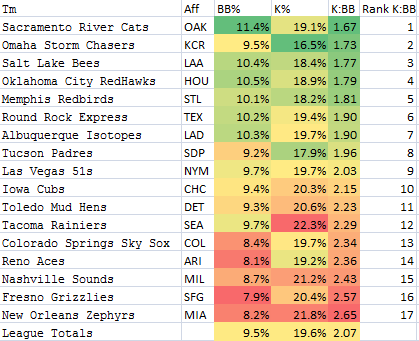 The OKC Redhawks have the least amount of players that Luhnow acquired through the draft. As we go deeper into the Astros farm. We will really see Luhnow's imprint on this ratio.

The Hooks lead the league in Ks, but also walk at a decent clip. I included the "BatAge" column also to show that the Hooks are also the youngest team in the Texas League.

Here is where we really start to see Luhnow's imprint on this ratio. Most of the hitters at A+ Lancaster were acquired by Luhnow. Guys like Andrew Aplin, Nolan Fontana, Preston Tucker, MP Cokinos, Tyler Heineman, and Joe Sclafani contribute to this great K:BB ratio at Lancaster, and they were all drafted in 2012 by Luhnow. Lancaster is in a league of their own in this ratio. 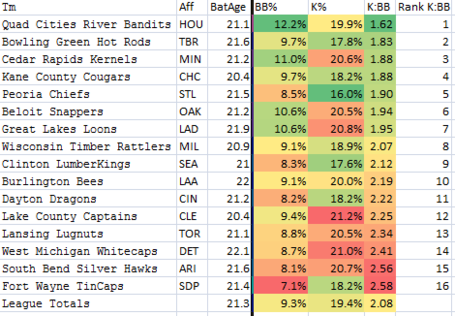 The Quad Cities River Bandits do not best the Jethawks, but they are still in a league of their own in their respective league. Carlos Correa, Rio Ruiz, and Austin Elkins all have fantastic walk rates that help lead the way. 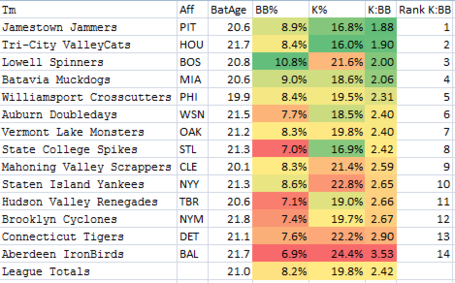 The Tri-City ValleyCats continue the trend also. They are in the highest tier of K:BB ratio in the NY-Penn League. This team is primarily full of college bats that Luhnow has drafted during his tenure.

Again, the Greeneville Astros, like Lancaster and Quad Cities, are in a league of their own in the K:BB ratio.

I chose not to include the GCL and DSL Astros since they tend to be the rawest of the raw in the farm system.

We've seen Luhnow's 2 drafts emphasize hitters that possess a good understanding of the strike zone. This approach is starting to show up in all levels of the minors, but, especially in the lower levels. In a few years, the Astros lineup could be full of hitters that are a nightmare for pitchers that nibble around the zone. The K:BB ratio is also leading to more success than the Astros minor league affiliates have had in recent history. Every affiliate of the Astros possesses a winning record. Lancaster and Corpus Christi both won their first half championships, and both appear poised to make a run at it again the second half.

K:BB ratio may not be a stat that only sabermetricians understand, but it is a driving force behind the Astros rebuild. It is also a ratio that we can get excited about as the future of the club slowly but surely becomes a little more positive.