A comparison of Chris Carter to several historical high-strikeout hitters, with the purpose of identifying whose career he has most closely followed to this point.

The other day, TCB reader KarlPopperFan introduced the names of a couple of players to compare with Astros' 1B/LF/DH Chris Carter. Aside from sending me on a tangent to research Karl Popper and his philosophies (always a topic that grabs my attention), it prompted me to think about Carter as well.

Everybody loves a good comp. Is Bryce Harper the next Hank Aaron? Is Mike Trout the next Joe DiMaggio? Is Willy Taveras the next Pete Rose?

Comparisons are even more fun with players who have one or two great skills and one or two comparatively crappy ones, because they're infinitely debatable. Love 'em or hate 'em, player comps are one of the great things about baseball - due to historical stat keeping going back to the 1800's, we can always put our favorite or least-favorite players into context.

KarlPopperFan suggested that Carter compares to Gorman Thomas (Outfielder, 1973-1986) and Dave Kingman (1B/OF 1971-1986). These are great comps, as they both were low average, high strikeout, high walk hitters who absolutely mashed baseballs.

So I asked the esteemed panel of TCB staff: Who else can I look at as a possible Carter comp? Here is our list, though doubtless many other hitters could qualify:

All of these guys whiffed a ton, walked a ton, and hit lots and lots of home runs. But who has Carter most resembled to this point in his career?

The trickiest part of comparing players across eras is that baseball has changed. For example, the strike out has become less of a stigma than it was in, say, 1921, and so the rate of strikeouts league-wide has increased. Likewise, walk rates and slugging rates have increased as well. 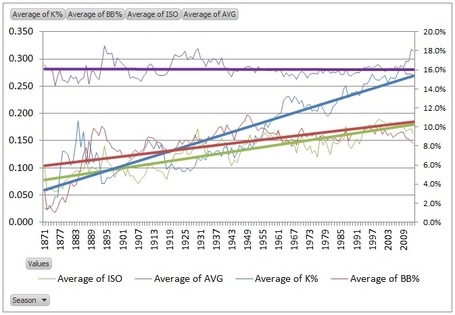 Given that, I decided to look at four stats in this comparison: Batting Average, Isolated Power (ISO = SLG% minus AVG), Strikeout Rate, and Walk Rate.

After that, for each of the four stats, I subtracted the resulting number of standard deviations from Carter's (compared to 2013 average). For ISO, comparing Carter to Kingman, that would be 1.242 (Carter's) minus 2.037 = -0.79

This article attempts to identify which player's career numbers have matched closest to Carter's so far during his major league career. This does not account for what Carter could be if he continues to improve, nor does it project future success or failure as a major leaguer. This also does not take into account defense; nor should it, since these guys play different and/or multiple positions.

Overall, here is the list of players that Carter compares best to, sorted by average stat standard deviation difference (which I will hereby dub ASSDD).

Looks like KarlPopperFan hit the nail on the head by citing Thomas as a good comp for Carter. It remains to be seen if Carter will continue on a similar career path, in which Thomas made an all-star team, led the league in strikeouts twice, home runs twice, and garnered MVP votes twice, or whether Carter will improve beyond that level or regress to a less successful career.

Here's hoping for the best! Either way, fans should rejoice in what Carter does well, while still taking him to task for improvements that can be made. But don't lose sight that to this point of his career, Carter has played on the same level as some very good historical hitters.

If any reader wants to suggest other players to compare, leave the name in the comments and I will plug them into my spreadsheet.