My favorite thing about Chris Carter is getting to shout "TROGDOR!" every time he hits a home run. If you don't get the reference watch this:

I don't exactly know how Carter got the nickname except that it was handed down to us from Athletics Nation. How he got the name isn't important. What is important is that he's a hulking man, a half-dragon man, so it fits. And it's fun.

What Has Carter Done This Season

How Much Contact Is Chris Carter Making At The Plate? 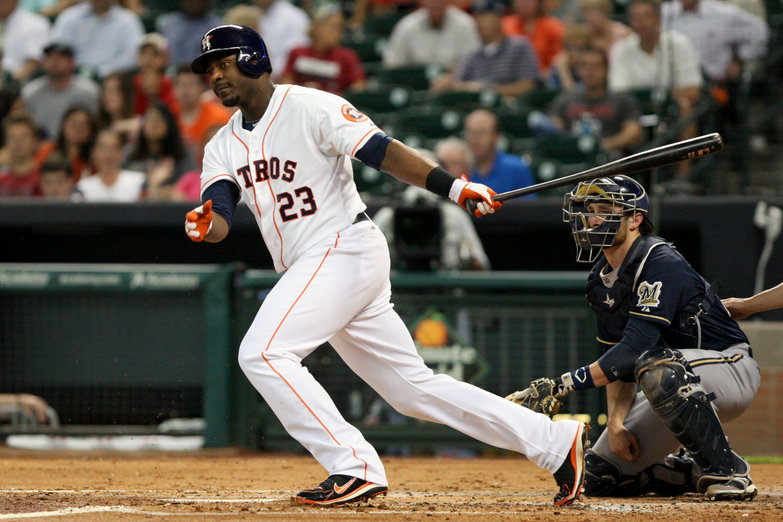 The prodigious slugger leads the team in homers, but also is one of the league leaders in strikeouts. Has he improved his game any since the beginning of the season or last year?

So what has Trogdor...er...Carter done this year? Well, simply put, he's hit for power and struck out...a lot. He's balanced his strikeouts with a 12.4% walk rate, which is well above average. He has a .345 weighted on-base average (wOBA) and a 119 weighted runs created adjusted (wRC+). Both numbers are well above average for both the first base and designated hitters positions. Both numbers are also tied for first on the team with Jason Castro, which makes you appreciate even more what Castro has been doing offensively this year. That's the positive side of Carter's game; The negative side of his game is his ineptitude in the field.

Carter is well below average in the outfield and even at first base. His defensive runs saved (DRS) and ultimate zone rating (UZR) numbers, at both positions, is in the negative. He is less of a defensive liability at first base but still a liability at that position. Carter has .1 wins above replacement (WAR) on the season.*

*All stats prior to Thursday night's games

I used wOBA and wRC+ to find teams that are a fit for Carter because a team that trades for him is going to trade for him because of the offense not his defensive prowess. I ignored teams looking for outfielders because frankly Carter shouldn't be out there. Instead I looked at teams who were hurting offensively at first base and designated hitter. I gave special consideration to those needing a designated hitter because that's where Carter is going to be the most effective for a team. He can play him at first but it's not ideal.

As in my other trade destination pieces, this list doesn't preclude another team coming in and trading for Carter. And it especially doesn't preclude a team from coming in and trading for Carter with some need in the outfield. I was able to find enough teams that needed help at either first base, designated hitter or both that teams needing outfield help didn't make sense.

From afar it looks like the Indians are set at first base and designated hitter with Nick Swisher, Mark Reynolds and Jason Giambi. Swisher and Reynolds have split time at first base with good results for Swisher and poor results for Reynolds. Carter would certainly add another first base option for Terry Francona but that's not why the Indians are here. They're here because Jason Giambi was born in 1971 and is 42 years old this year. He has a .320 wOBA, a 103 wRC+ and six home runs. Outstanding numbers for a 42 year old, but below league average for a designated hitter.

Carter provides another option at first base while also bumping Giambi out of the designated hitter spot and into a pinch hitting role where he's probably more suited. He would also give the Indians a right-handed bat to balance a heavy left-handed lineup.

The Rangers offense hasn't been as good as it's been the past few years. The departures of Josh Hamilton and Mike Napoli have left huge holes that Arlington has struggled to fill. Mitch Moreland has been okay at first base, Lance Berkman on the other hand has not. Berkman also recently went on the disabled list leaving the Rangers high and dry for what to do at the designated hitter spot. Engel Beltre, Julio Borbon and AJ Pierzynski have all been used in the designated hitter spot at some point this season. Overall, designated hitters have a .320 wOBA and a 94 wRC+ for Dallas this season.

With Nelson Cruz possibly being suspended soon due to the Biogenesis documentation, Carter could provide the Rangers with another option in the outfield, as well as a designated hitter that could help replace the loss of Berkman.

The Rockies are quickly starting to fall behind in the division so it's questionable whether they would make a trade to compete for a playoff spot this year. That's the beauty of them trading for Chris Carter. He's not a free agent until 2019. The Rockies are the only National League club on this list so Carter is almost certainly limited to first base. I know what you're thinking, the Rockies have Todd Helotn. Unfortunately for Rockies fans, their franchise first basemen turns 40 in August and has produced very little for the club this year. Ryan Wheeler and Jordan Pacheco have also seen time at first base and have been just as bad if not worse than Helton. Overall, the Rockies' first basemen have a .284 wOBA and a 64 wRC+.

Here are the names the Yankees who have played at first base and designated hitter this year: Lyle Overbay, Corban Joseph, Travish Ishikawa, Travis Hafner, Thomas Neal, Ben Francisco and, of course, Mark Teixeira. The biggest name on that list,Teixeira, has only played in 15 games for the Yankees this year and he's not likely to play anymore than that this year since he's on the 60-day disabled list. Needless to say the Yankees need help bad at both first base and designated hitter.

The Yankees are easily the best fit for Carter and the bonus for them is that he injects some youth into an aging roster.