You want to get more excited about George Springer? Don't worry about those pesky strikeouts. Everyone is striking out now.

How many times do we need reassurances about George Springer's strikeout rate?

A lot, because it's getting harder and harder to be pessimistic about the sweet-swinging outfielder. He's currently tearing up Triple-A Oklahoma City with the ease that he did to Corpus Christi for half a season. He's got Astros beat writer Brian T. Smith gushing over him as the most exciting player he's seen in person in the organization.

That's hard to argue with, because Springer certainly looks like the best prospect in the organization right now. Except for those strikeouts, right? You've seen enough of the strikeouts this year. Why do you need to be subjected to more? Can Springer really be a big-time prospect with so many Ks? 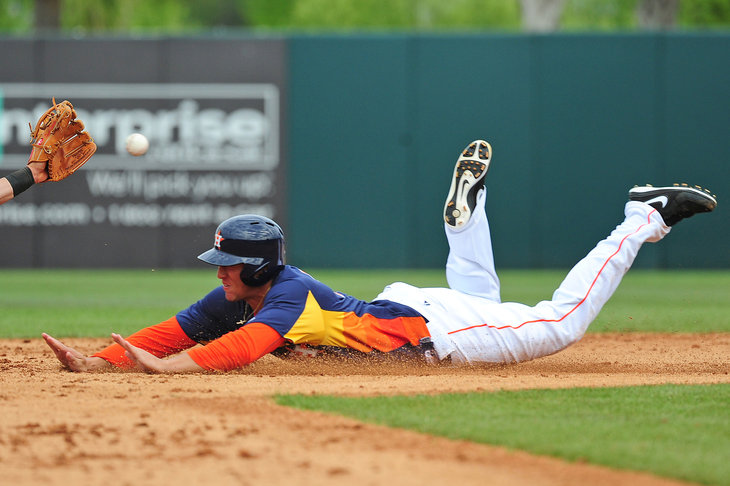 Again, Chris pretty much sums up what I said here, but more elegantly.

I'm not sure if I can answer that question definitively, but I can look back at history. I do that well.

Clack and Chris have been talking this for a while, how Springer is in a group of players who could become good major leaguers. But, theoretical data and studies are just that. Chris Carter theoretically could be an MVP candidate, but he drives fans crazy instead.

In thinking about Springer, my mind immediately touched on one other player. I'm going to throw this name out there, but don't see it as a comp. I'm not comparing the two or saying that Springer will be just like this guy. That'd be unfair to Springer, but the parallels are encouraging.

The Mick debuted in the majors in 1951, playing in 96 games and totaling 386 plate appearances. He had a strikeout rate that season of 19.6 percent.

Wait, you say. That's nothing like Springer. His strikeout rate is 10 percent less than Springer. That's where the second part of this is important. See, the league K rate in 1951 was an absurdly low 9.6 percent. So, while Mantle has a relatively tame K rate by our current standards, he was 10 percent higher than league average.

One of the things clack has brought up multiple times is that the strikeout rate in the league has risen quite a bit recently. Here's a graphic look at just that rise: 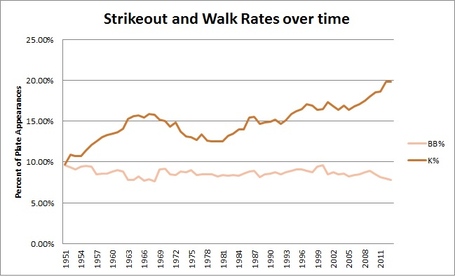 That means that if he ends up like Mantle, Springer could strike out about 29 percent of the time in his rookie season and still be productive. Mantle lowered his K rate each season, dropping to around 15 percent most seasons. For his career, Mantle had a K rate of 17.5 percent. The league rate for that stretch is 13 percent, meaning Mantle struck out about four percent more than league average for his entire career.

Let's put that back in Springer terms. If he can get his K rate to around 25 percent in the pros, with occasional dips under that, he can be an impact player, even with all of the strikeouts.

The important thing is improvement. If we continue to see that, maybe he'll have a long and fruitful career.